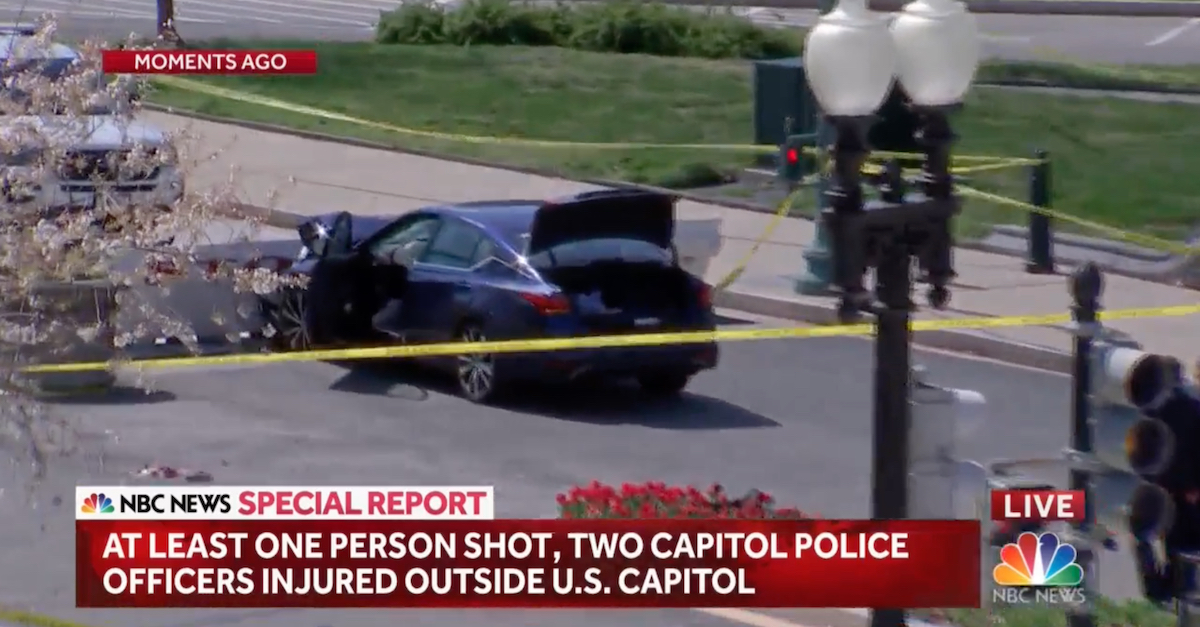 A U.S. Capitol Police officer has died following an attack by a suspect who “rammed a vehicle” into a barrier on Friday, authorities said at an afternoon news conference.  The suspect exited his car and “lunged” or ran “aggressively” at the officers “with a knife in hand.”

“He did not respond to verbal commands,” said Yogananda Pittman, the acting chief.  “U.S. Capitol Police officers fired upon the suspect.”

“It is with a very, very heavy heart that I announce one of our officers has succumbed to his injuries,” Pittman said.  “We still have to notify the next of kin.  I just ask that the public continue to keep U.S. Capitol Police and their families in your prayers.  This has been an extremely difficult time for U.S. Capitol Police after the events of Jan. 6 and now the events that have occurred here today.”

Robert Contee, the acting chief of the Washington, D.C. Metropolitan Police Department, said his department was taking over the core homicide and internal affairs investigations.

Earlier, CNN said the suspect was taken into custody and was conscious immediately after the events unfolded.

Contee said he did not believe the threat was ongoing but noted that the investigation was still unfolding.  He added that the suspect did not appear to be “known” to the Washington, D.C. law enforcement community. Pittman also said the suspect’s name was not contained in Capitol Police files.

“This was someone who was actively trying to just get at whoever, or whatever, we just don’t know right now,” Contee said while openly wondering about the suspect’s motive.

Earlier, Capitol Police tweeted that the suspect had “rammed a vehicle into” the two officers.

CRITICAL INCIDENT: USCP is responding to the North Barricade vehicle access point along Independence Avenue for reports someone rammed a vehicle into two USCP officers. A suspect is in custody. Both officers are injured. All three have been transported to the hospital. pic.twitter.com/4TXIdulJc6

NBC News reported that incident occurred on the Senate side of the Capitol building.

NBC’s Pete Williams: After striking two US Capitol Police officers, the driver jumped out of the car with a knife and was shot by Capitol police.

The National Guard mobilized under the presumption that an attack could be ongoing.

Around 3.5 dozen national guard troops marched to the barricade down the street from the scene.

They’re carrying shields and are fully armed. One officer told me they aren’t sure whether this remains an active shooter situation. pic.twitter.com/qpyin4NS1u

Appears that a car smashed into the barrier. Two people are on stretchers. Can’t see whether it’s an officer or civilian pic.twitter.com/Ud5WYGyKFu

It appears at least one injured party was transported to the hospital by helicopter.

🚨🚨A helicopter just landed on the east front of the Capitol. I’ve never seen anything like this before. ever. pic.twitter.com/LxV0mywRSe

The USCP has cleared the external security threat incident located at all of the U.S. Capitol Campus buildings, however the area around the crime scene will continue to be restricted and individuals should follow police direction. pic.twitter.com/6SXr5WJmcE

This is a breaking news report.  It has been updated as information has been released or clarified.