‘Surprising’: Mueller Says He Didn’t Know Prosecutor Repped Clinton Until After She Joined His Team 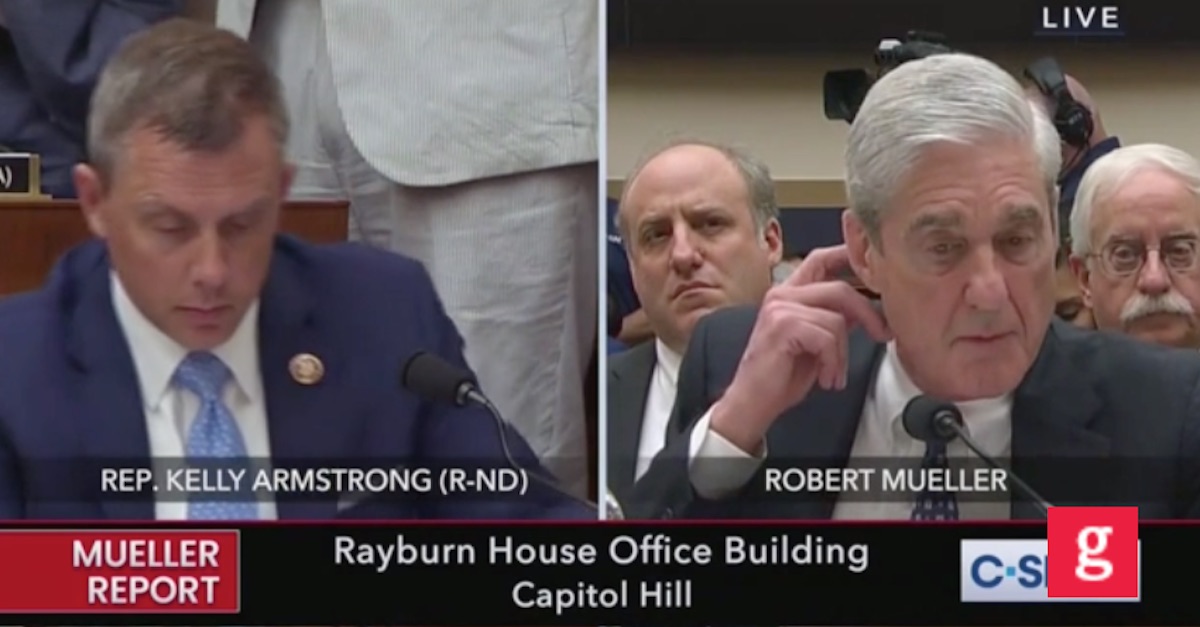 In one notable exchange from Robert Mueller’s Wednesday morning testimony before the House Judiciary Committee, Mueller admitted that he didn’t know one of the prosecutors on his team represented Hillary Clinton until after that prosecutor joined his team.

The line of questioning from Rep. Kelly Armstrong (R-N. Dakota) about Jeannie Rhee’s history elicited a quick “no” from Mueller that was deemed “surprising” by observers.

Armstrong then asked, “Did you know that before she came on the team?” Mueller answered, “No.”

This is an interesting exchange because Rhee was a partner at the WilmerHale law firm, where Mueller and Mueller deputy Aaron Zebley were also partners until they left for the Special Counsel’s Office. Zebley, it has also been noted, once represented former Clinton aide Justin Cooper (the Blackberry hammerer guy).

In May 2017, Ms. Rhee was asked by Robert Mueller to join the Special Counsel’s Office, where she led the team investigating Russian cyber, social media and intelligence efforts to influence the 2016 presidential election. Ms. Rhee’s team was responsible for many of the office’s significant accomplishments: the two Russia-related indictments, the prosecution of Trump associate Roger Stone, and the guilty pleas of attorney Michael Cohen and campaign advisor George Papadopoulos. Ms. Rhee also helped secure the guilty plea of former campaign manager Paul Manafort.

Prior to her latest WilmerHale stint–which ended in June 2017 when she accepted a job at the Special Counsel’s Office–Rhee served as a deputy assistant attorney general for the Barack Obama administration from 2009 to 2011. During her time in Obama’s Department of Justice (DOJ), Rhee worked in the Office of Legal Counsel where she provided guidance to former attorney general Eric Holder, the White House and other agency heads and higher-ups.

At WilmerHale, Rhee served as a partner in the firm’s litigation and controversy department as well as a member of their investigations and criminal litigation practice. According to a press release announcing Rhee’s February 2011 return to the firm:

While at WilmerHale, Rhee once represented the Clinton Foundation against a racketeering lawsuit initiated by right-wing activist group Freedom Watch; Rhee also served on Hillary Clinton’s defense team against lawsuits directed at the former secretary of state’s private server practices.

Rhee donated a total of $5,400 to Clinton in 2015 and 2016. Rhee also donated a combined $4,800 to Obama in 2008, and the same amount again in 2011. Rhee has also contributed smaller amounts of money to the Democratic National Committee and multiple Democrats running for Congress.

It did not take long for Rudy Giuliani to blast Rhee’s involvement in the probe on Twitter. He said it was “ridiculous Mueller ignored politics in hiring.”

Giuliani was far from the only individual to call attention to Rhee’s politics on Wednesday.

WATCH: Former Special Counsel Robert Mueller claims he did not know his top staffer Jeannie Rhee had deep ties to Hillary Clinton before he hired her. #MuellerHearing pic.twitter.com/gIGfjS2PCh

They were both partners at Wilmer Hale, and she left the firm to join Mueller's SC team.#MuellerHearing

Mueller admits that he did not know Jeannie Rhee, one of his top prosecutors, had previously represented Hillary Clinton in email-related litigation before he hired her. He says he found this out only AFTER she was hired. Great vetting!