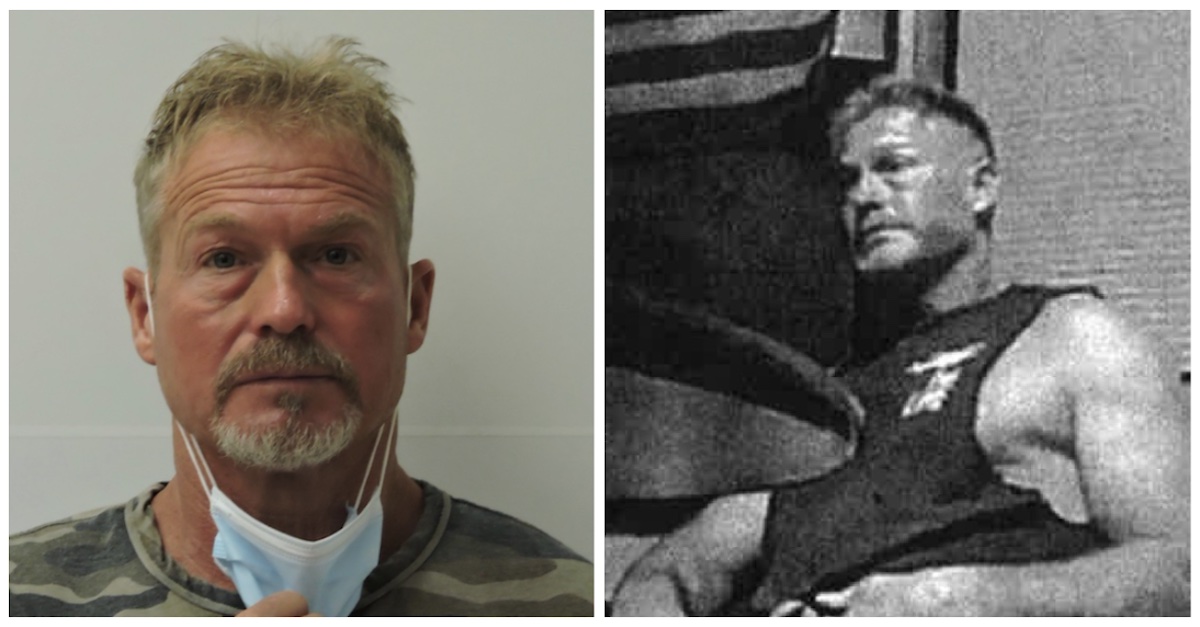 The law enforcement affidavit supporting the arrest of 53-year-old Colorado man Barry Morphew that was just released shows the accused wife-killer telling the FBI at least 13 times that he had “no idea” about his wife’s extramarital affair.

Then, the document smashes through those alleged denials with his alleged fire-and-brimstone remark that maybe 49-year-old Suzanne Morphew’s “disappearance was a form of God’s judgment,” as investigators put it.

“Barry has made at least thirteen assertions by his third interview with the FBI, most of them unsolicited, that he had no idea about the affair and asks Agents to say they believe him,” an extraordinary footnote of the 131-page affidavit states. “This contradicts other statements made to the FBI and his actions in 2019 to find out who Suzanne is talking with and who she is seeing on her trips.”

Filled with new text messages, notes from law enforcement interviews, and previously unreported electronic evidence, the affidavit supporting Barry Morphew’s arrest throws a wealth of information about the high-profile case into the public domain in advance of the trial scheduled for next May.

Here are some of the most eye-popping passages of the affidavit.

Barry Morphew’s preliminary hearing in August showcased extensive evidence of the breakdown in his marriage, as prosecutors depicted him as manipulative, abusive, and jealous about his wife’s two-year affair with Jeff Libler, a married father of six with whom she reportedly planned to run away to Ecuador.

Some five months before her disappearance on Mother’s Day of 2020, Suzanne Morphew made clear she wanted out of her marriage, according to the affidavit.

“Suzanne took clear, articulable steps in January 2020 in attempts to separate from and divorce her husband, Barry,” Chief Investigator Alex Walker IV wrote in a May 2021 affidavit. “She told her family and close friends about her intentions, secretly recorded her notes of abuse in her phone because Barry monitored it, confronted Barry in arguments that she secretly recorded with help from a friend and, finally, sent him a text four days before she disappeared saying that she was ‘done, let’s handle this civilly.'” 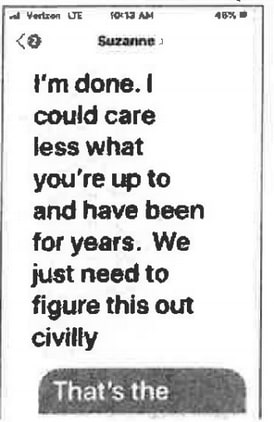 Investigators embedded a screenshot of that text message in that affidavit.

2. Barry Morphew allegedly denied knowledge of the affair more than a dozen times to law enforcement, calling his marriage “perfect.”

The text message embedded in the affidavit is not the picture that the husband painted to investigators from the Colorado Bureau of Investigation, Chaffee County Sheriff’s Office and the FBI, all assigned to the case.

According to the affidavit, the husband depicting his marriage as “perfect” and claimed Suzanne “had no intention of leaving him,” statements authorities say have been “proven to be false and misleading by this investigation.”

Morphew allegedly suggested that he would understand why investigators would think such a message would point to motive.

“So, I can see through an investigator’s eyes that they would look at something like that and say, ‘Well, yeah if they were going to get a divorce then Barry you know, might, might do something.’ But that just was not the case. I mean absolutely not the case,” Morphew allegedly told authorities.

3. Authorities regarded the discovery of Suzanne Morphew’s bicycle near her house as suspicious—because there were no skid marks.

Prosecutors allege that Barry Morphew tried to cover his tracks by tossing his wife’s bicycle on a path near their home. The affidavit shows a still frame from the body camera video showing the bike, along with Chaffee County Sheriff’s Office Deputy Damon Brown’s observations about how he found it.

“After all these observations I started to question if something criminal had occurred as it looked like the bike was purposely thrown in this location,” Brown wrote in his notes, according to the affidavit. 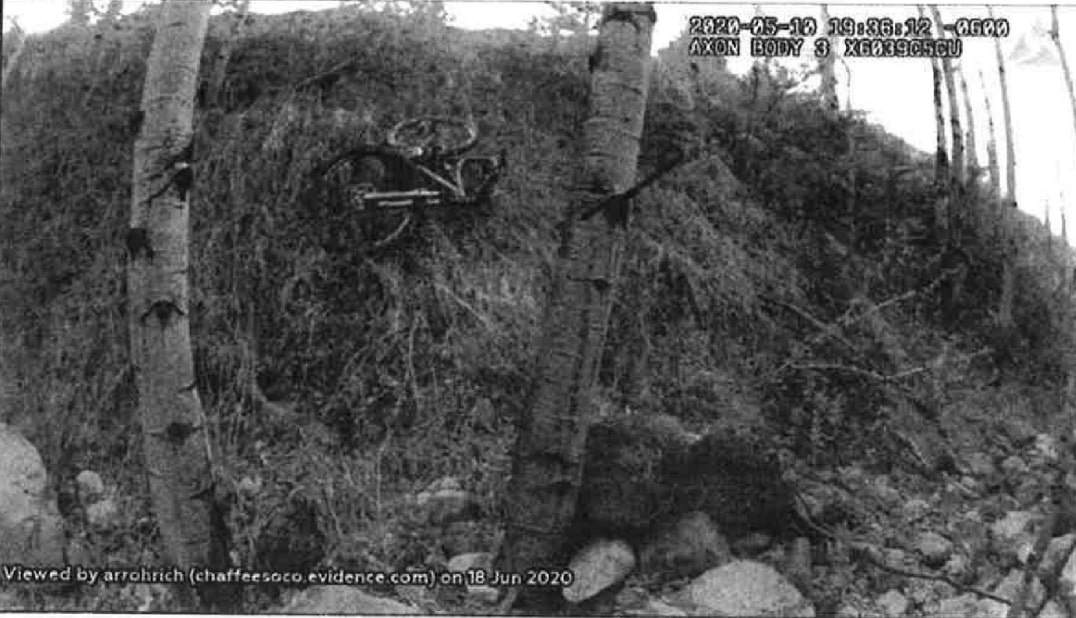 Sergeant Lamine Mullenax said he shared the same impression, believing that the bike “appeared out of place.”

“As Sergeant Mullenax examined the bike, he found no scratches or damage to it,” the affidavit states.

“Barry deleted numerous calls between himself and Suzanne from May 4-5, 2020,” the affidavit states. “When asked by FBI Agents in April 2021 why he deleted those calls, he said he did not recall doing so and he must have been freeing up space on his phone.”

Months earlier, the husband’s phone allegedly showed a number of sexually-charged internet searches about a younger woman, a “girl,” and a “Teen Diary” entry from the “9th Grade.”

Among the phrases authorities found in the deleted web searches were “Older Man Younger Woman Relationships — YouTube,” “3 base! My first hand job: Dear Teen Diary, 9th Grade, Entry 14 — You Tube,” and “how to make a girl orgasm utube,” according to the affidavit. Yet on page 119 of the documents, investigators said that Barry Morphew “was told that Suzanne confided in friends,” namely Jeff Libler, “that sex with [Barry] was not pleasurable.” “She had an orgasm every time, so I don’t understand that,” Barry Morphew allegedly shot back.

Authorities say that all of those searches were in the January 2020 time frame, and later that month, his phone accessed, “LocalSnapSext [dot] com,” “Find a Cute Girl Near Salida,” and “Come Get Dirty.”

In April, Suzanne Morphew allegedly sent Barry the following text, which authorities claim was deleted: “Oh I’m sure your mistress has you all happy now so you can say you love me but bully me when you’re with me…yeah that’s love.” 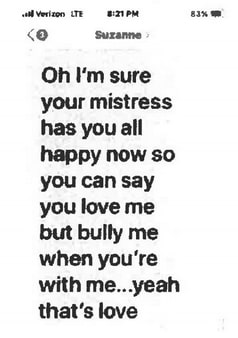 5. Authorities provide more details about Suzanne Morphew’s depiction of her husband as “Jekyll and Hyde” — and why her friend allegedly bought her a “spy pen” to record him.

A memorable analogy to emerge from the August court proceedings, the literary allusion about the internal struggle between good and evil in men’s souls is how Barry Morphew’s wife allegedly described her husband to her friend.

“He won’t speak of divorce,” Suzanne Morphew told her close friend Sheila Oliver on March 25, 2020, in a lengthy exchange recorded in the affidavit. “Begging for another chance. I’m so torn. But I’m my heart I know who he is.”

Authorities say that Oliver was so concerned about what Barry Morphew’s behavior that she bought a “spy pen” for her friend in January 2020, designed to record the conversations covertly.

Suzanne Morphew allegedly used the device to record an argument with her husband some two months later in March 2020, in a recording that authorities say they recovered.

According to the affidavit, they were arguing about money, and Suzanne Morphew indicated that was a frequent theme.

“It’s all about money,” she is quoted as saying, a topic that she estimate was responsible for “80%” of their arguments.

“If you want your money, I’m going to pay you back,” the husband said at one point in the conversation.

Read the full 131-page affidavit below: