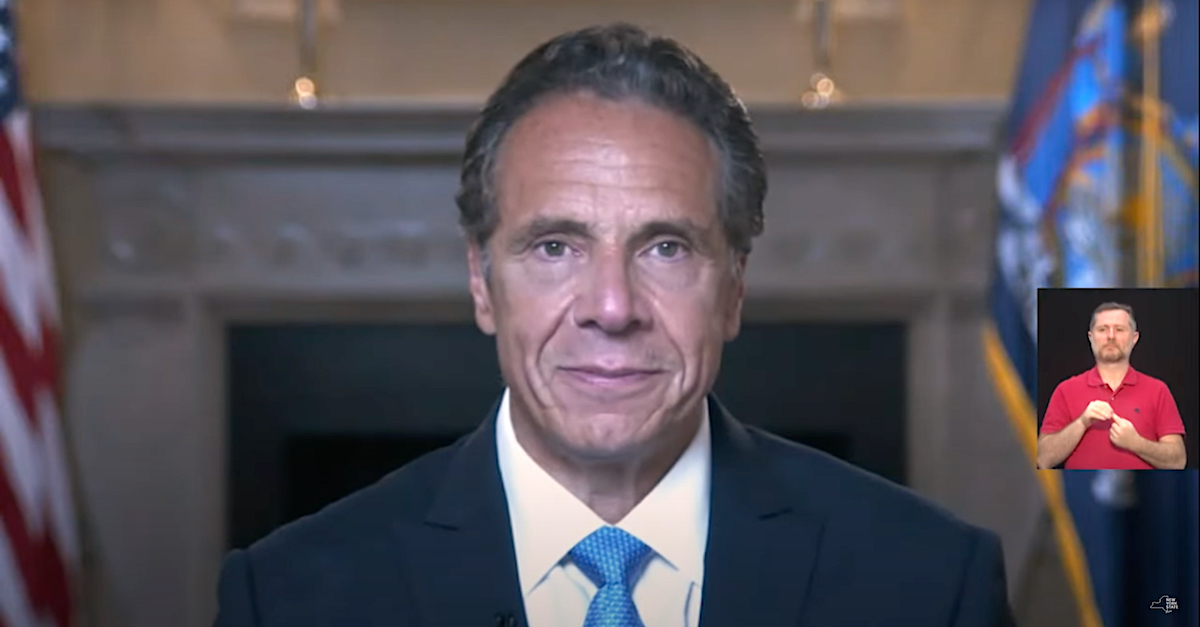 Now-former New York Gov. Andrew Cuomo (D) issued a series of pardons and commutations in his final hours in office, New York State announced in a since-scrubbed executive office press release that resides in a web archive. Among the individuals who received Cuomo’s last-minute blessing is David Gilbert, 76, the father of controversial San Francisco District Attorney Chesa Boudin (D) — who himself recently has faced two recall efforts (the first one failed).

“My heart is bursting,” Boudin tweeted upon hearing about his father. “On the eve of my first child’s birth, my dad — who’s been in prison nearly my entire life — was granted clemency. He never intended harm, yet his crime devastated many families. My heart breaks for the families that can never get their loved ones back.”

My heart is bursting. On the eve of my first child’s birth, my dad – who’s been in prison nearly my entire life – was granted clemency.

He never intended harm, yet his crime devastated many families.

My heart breaks for the families that can never get their loved ones back.

The elated tweet was accompanied by a childhood image. Boudin was three years old when his father went to prison, the Washington Post noted.

Me and my dad in one of our last precious moment of freedom together. pic.twitter.com/ZaOYdn1tx4

The Post also explained how Boudin heard the news:

At about 2:30 p.m. in San Francisco, he received a text from his mother, Kathy Boudin, who had also served prison time in the same incident.

“David was commuted!” she wrote. “Eligible for parole.”

Boudin excused himself from a Zoom meeting, yelled with joy, found his wife and held her in the hallway.

Gilbert was sentenced to serve 75 years to life as a member of the Weather Underground — a group which the New York Times noted had stolen “$1.6 million in cash from the armored car outside the Nanuet Mall near Nyack, N.Y.”

Two police officers and a guard died in the 1981 incident.

Gilbert has elsewhere been described as an orator and agitator at Columbia University in the early 1960s.

Cuomo previously issued a similar decision in Kathy Boudin’s case; a parole board eventually agreed she should be released from prison. Gilbert’s case is now set to follow the same path, but his release would ultimately be up to a parole board as well.

A press release from state government explained Cuomo’s rationale in granting the commutation:

David Gilbert, 76, was convicted of three counts of second-degree Murder and four counts of first-degree Robbery in 1983. He has served 40 years of a 75-years-to-life sentence, related to an incident in which he was the driver, not the murderer. While incarcerated, Mr. Gilbert has made significant contributions to AIDS education and prevention programs; he has also worked as a student tutor, law library clerk, paralegal assistant, a teacher’s aide, and an aide for various additional facility programs. At this time, Mr. Gilbert is the only individual still incarcerated, with no possibility of parole in his lifetime. He will be referred to the Parole Board for potential release.

A death which occurs during the commission of a felony is considered second-degree murder in New York State. Other states have similar so-called “felony murder” rules — which have become increasingly criticized in progressive reform circles in recent years. Cuomo’s statement takes aim at the fairness of the felony murder rule.

New York State Department of Corrections records indicate that Gilbert was convicted of second-degree murder and first-degree robbery. He began serving his sentence in state custody on October 6, 1983, and is now eligible for a parole date of October 18, 2021. He is currently incarcerated at New York’s Shawangunk Correctional Facility in the Catskills.

Cuomo’s press release said the final six acts of clemency f0r the administration were given to people “who have demonstrated substantial evidence of rehabilitation and a commitment to their communities.”

“The march towards a more fair, more just, more equitable, and more empathetic New York State is a long one, but every step forward we can take it worthwhile and important,” Governor Cuomo said. “These clemencies make clear the power of redemption, encourage those who have made mistakes to engage in meaningful rehabilitation, and show New Yorkers that we can work toward a better future. I thank all the volunteer attorneys representing clemency applicants for their dedication and service to justice.”

Here are the governor’s other final commutations, parole referrals, and pardons:

Greg Mingo, 68, was convicted of four counts of second-degree Murder, first-degree Robbery, first-degree Burglary, and second-degree Criminal Possession of a Weapon. He has served 39-and-a-half years of a 50 years-to-life sentence. While incarcerated, Mr. Mingo earned his GED and a paralegal certification, enabling him to assist over a thousand other incarcerated people with their legal cases, and designed an eight-week legal research course that he taught for years at Elmira and Great Meadow. Mr. Mingo has also become a dedicated and respected peer counselor, founding programs focused on fatherhood, family relationships, and domestic violence and abuse, and has facilitated thousands of hours of counseling programs. Upon release, Mr. Mingo plans to live with family and work as a full-time counselor helping individuals struggling with addiction, anger, and domestic violence.

Robert Ehrenberg, 62, was convicted of two counts of second-degree Murder, and one count of first-degree Robbery and first-degree Burglary. He has served 28-and-a-half years of a 50 year-to-life sentence. While incarcerated, Mr. Ehrenberg has earned as Associate’s degree from SUNY Sullivan, and a Bachelor of Science degree from St. Thomas Aquinas College, graduating as valedictorian of his class for both degrees. Mr. Ehrenberg has worked as a tutor through the Hudson Link College Program, and in this role designed and taught a 16-week pre-college Basic Algebra course. Mr. Ehrenberg has also been a leader within charitable groups that raise funds for causes like academic scholarships, childhood cancer research, and animal rescue and sanctuary efforts. Upon release, Mr. Ehrenberg plans to continue his education and volunteer work.

Ulysses Boyd, 66, was convicted of one count of second-degree Murder, and two counts of second-degree Criminal Possession of a Weapon, for an incident in which he was not the gunman. He has served 35 years of a 50 years-to-life sentence. While incarcerated, Mr. Boyd has served as a clerk for the facility branch of the NAACP, and as a DOCCS transitional services coordinator for over a decade. Upon release, Mr. Boyd will be reunited with his wife.

Lawrence Penn, 51, pled guilty to first-degree Falsifying Business Records in 2015, and was incarcerated for two years. A West Point graduate and a veteran, Mr. Penn continues to be active in his community, and a full pardon will allow him to fully re-engage in a meaningful way with society.

Cuomo resigned effective at midnight Tuesday after a group of women accused him of sexual harassment and a subsequent report from the New York Attorney General’s Office found he broke state and federal law. The sheriff who covers the state capitol in Albany County, N.Y., said Cuomo “possibly” faces “a couple” of misdemeanors — assuming an investigation bears fruit into the claims of at least one of Cuomo’s accusers.

Cuomo said during a farewell speech that “crime must be controlled” but that government needed “to be smart about it.” He touted his “progressive” criminal justice reforms but said it was “misguided” and “dangerous” to “defund the police” and said he disagreed with fellow Democrats who suggested that it was a viable option. Rather, he said the police needed to be reformed and that discrimination needs to end.