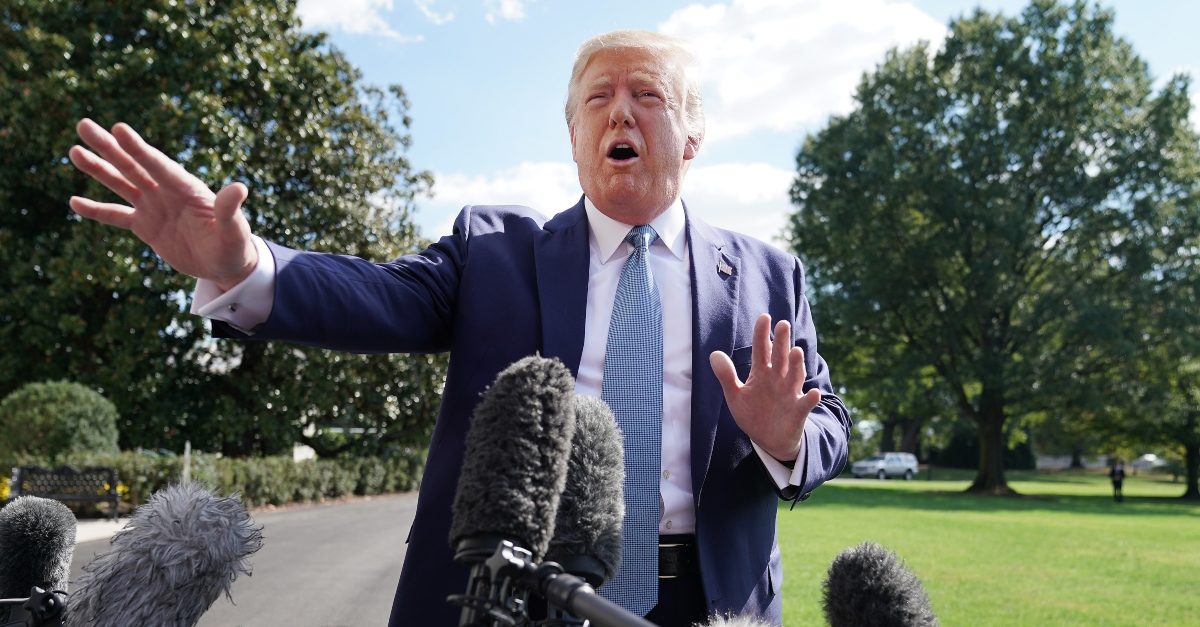 Following weeks of compounding evidence and testimony implying that President Donald Trump made congressionally-approved aid to Ukraine contingent on a politically advantageous investigation, the President and his GOP supporters’ primary defense has been an alleged Sept. 9th phone call during which the President told E.U. Ambassador Gordon Sondland he wanted “no quid pro quo.” But a Friday report by JustSecurity, supported by a Wednesday report from the Washington Post, appear to show that no such call ever took place.

Sondland testified that he called Trump on Sept. 9th and had a very short conversation, only asking a single question regarding Ukraine aid.

Mid-way through Sondland’s public testimony, Trump even took to the White House lawn where, reading from handwritten notes, he performed a dramatic re-enactment of Sondland’s version of the call, claiming that it completely exonerated him of wrongdoing.

“That means it’s all over,” he said to reporters before departing.

However, there appears to be no evidence, testimony, or documentation to support that such a call ever took place. In fact, all of the available information points to only one call taking place between the President and Sondland during that time – one which is far more damaging to the GOP’s defense of Trump.

“The ‘no quid pro quo’ call did not take place on September 9th, as Sondland claimed at one point in his testimony; instead, it took place on September 7th. This is shown from the testimony of Tim Morrison, Senior Director for European Affairs for the National Security Council, and Charge D’Affaires Bill Taylor, both of whom were briefed on the call by Sondland shortly after it occurred,” attorney Susan Simpson wrote in her meticulous analysis of the evidence for JustSecurity.

During the Sept. 7th call, which Sondland only disclosed in an amended statement after Morisson and Taylor’s testimonies, Trump did say he wanted “no quid pro quo,” but he also demanded that Ukrainian president Volodymyr Zelensky personally announce the launching of Trump’s politically advantageous investigations in a publicly televised press conference.

“This detail is critically important, not because the precise date of the call is significant in and of itself, but because of what it shows about the true content of that call – the substance of the conversation that Morrison and Taylor described in their testimony, and that Sondland omitted from his,” Simpson wrote.

Simpson also noted that Sondland’s descriptions of the alleged Sept. 9th call, which would have occurred before dawn on the East Coast, were already recorded.

“Because on September 7th, after his call with Sondland, Morrison immediately went to the NSC lawyers to report what had happened, because ‘[he] was concerned about what Ambassador Sondland was saying were requirements’ for the release of the security assistance,” Simpson wrote.  (Citations ommitted herein.)

“That is, Morrison went to the NSC lawyers to report Sondland’s claim that President Trump was involved in making an explicit quid pro quo demand to Ukraine.”

It’s also important to note that President Trump has never publicly confirmed that his Sept. 9th phone conversation with Sondland took place, he’s merely repeated – verbatim via notes – exactly what Sondland said in his description of the call.