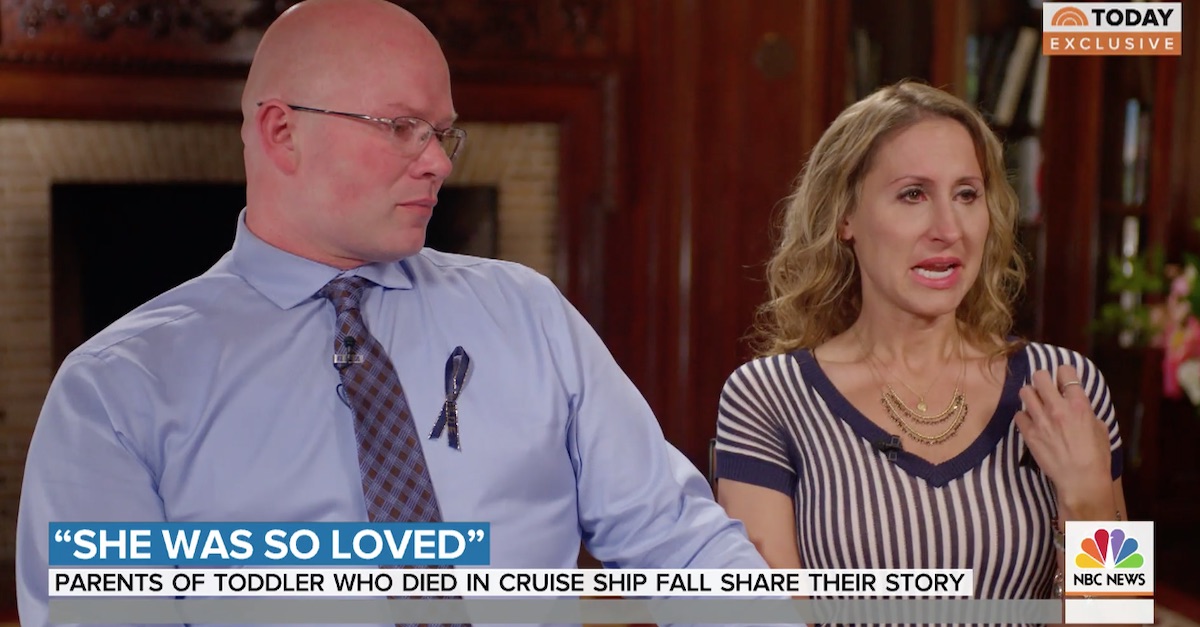 Kimberly Wiegand and Alan Wiegand, the grieving Indiana parents of 18-month-old Chloe Wiegand, plan to sue cruise line company Royal Caribbean after Chloe fell 11 stories out of an open window in the children’s play area to her death while the ship was docked in San Juan, Puerto Rico.

Chloe was reportedly playing with her grandfather, Salvatore Anello, who placed her on a railing by the window, not knowing that the window was open. Wiegand went on to say that Anello had never put Chloe in danger and that he repeatedly said “I believed there was glass” immediately following the incident. Standing Chloe against the glass was something Anello frequently did during Chloe’s brother’s hockey games. According to Elmer Román, the secretary of public safety for the government of Puerto Rico, Anello is currently under investigation for the homicide.

During an interview on the Today Show, Kimberly Wiegand said Royal Caribbean claimed that the window was open in order to ventilate the room.

“Well, to that I would say get a fan,” Wiegand said. “Come up with some other mechanism to make your guests comfortable rather than creating a tremendous safety hazard that cost our child her life.”

The family is reportedly working with a lawyer in Puerto Rico regarding Anello‘s culpability. The family is also working with Miami-based attorney Michael Winkleman to file a lawsuit against the cruise line over alleged negligence and the part they played in what Winkleman called a “preventable tragedy.”

“Why would you ever, in a kid’s play area, put windows that passengers can open?” Winkleman told reporters on July 9. Winkleman also stated that Anello didn’t open the window and that there were no signs or stickers in place alerting people about the “hidden danger.”

“We are deeply saddened by this incident, and our hearts go out to the family,” a Royal Caribbean representative said. Royal Caribbean reportedly helped accommodate the family with lodgings and flights while they were in Puerto Rico cooperating with the police investigation of the incident.