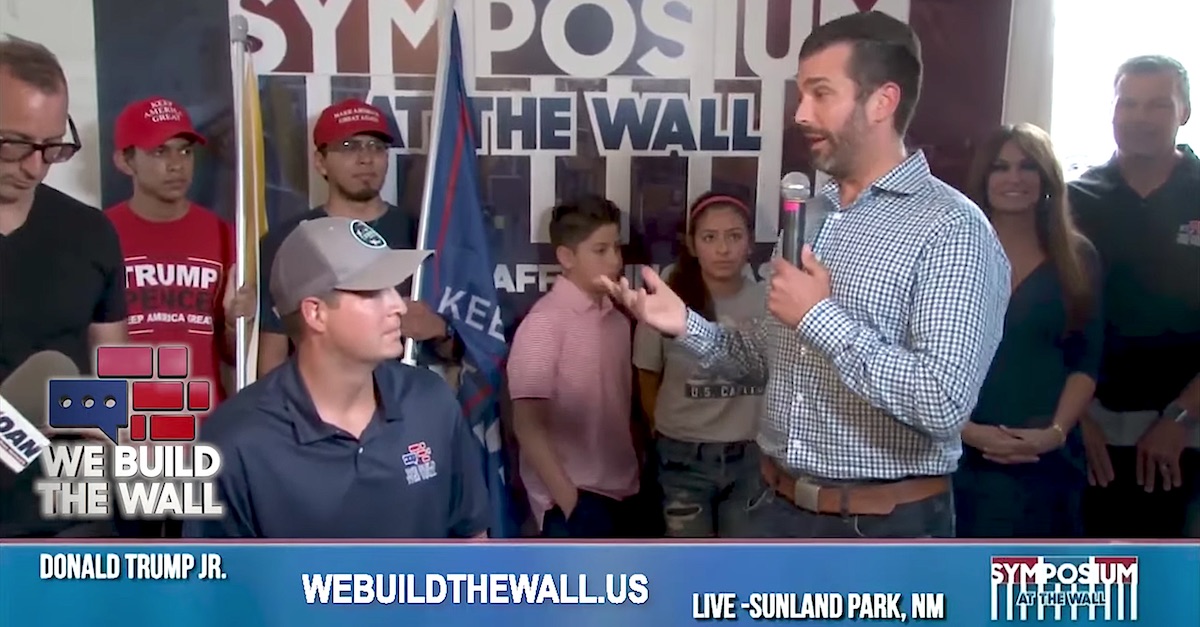 Former Donald Trump advisor Steve Bannon, along with Brian Kolfage and two others, has been indicted on federal money laundering and wire fraud charges.  The indictments of the four men surround a privately funded border wall which has come under suspicion and controversy in the past.

The charges highlight stark differences between the president and his son, Donald Trump, Jr., about the construction of the private wall along the southern border.  The president on Thursday renewed his complaints against the project, which he called “inferior” and “too complex” for anyone but a government agency.  However, last year, Trump Jr. extolled the private wall as “showing, really, what capitalism’s all about.”  Trump Jr. said in a recorded statement at an event celebrating the private wall that “private enterprise” was “at its finest” on the project — “doing it better, faster, cheaper than anything else.”  Yet — again to the contrary — the president said the private wall suffered “construction problems” and didn’t work as well as the wall the government was building at his direction.

Meanwhile, Steve Bannon himself once said in an event at the border wall itself that his private wall was designed to “augment” Trump’s plan — and suggested it was being built with the government’s blessings.

The video is all here.  Let’s walk through the disparities.

“President Trump has always felt the Wall must be a government project and that it is far too big and complex to be handled privately,” the statement went on to say.

Trump himself spoke shortly before noon on Thursday to distance himself from the project whose leaders have now come under criminal scrutiny.

“This is for government, this isn’t for private people, and it sounded to me like showboating — and I think I let my opinion be very strongly stated at the time,” Trump said of the private wall.  “I didn’t like it, it was showboating, and it may be looking for funds,” he added (with the apparent latter reference to the accusations that the money was mismanaged).

“I think it’s a very sad thing for Mr. Bannon; I think it’s surprising,” Trump added; he later noted that Bannon had a “great career” at Goldman Sachs but that he hadn’t been associated with Bannon recently.  “I didn’t like that project,” he said further with regards to the private wall.

He said he didn’t know the people involved with the private wall project beyond his former association with Bannon:  “I don’t believe I ever met them.”

Trump went on to complain about the private wall project in the same tone as the White House statement:  “I don’t think that should be a privately financed wall; I don’t think — it’s too complex; it’s too big,” he said.  He also said his government’s wall was approximately 300 miles long but that the private wall was having “construction problems.”

“It was toppling over and other things, and I didn’t like it because I didn’t want to be associated with that,” Trump said of the private wall.  He said the government’s wall was “very powerful” and “virtually impossible to get through.”  He called the private wall an “inferior wall” and “inappropriate to be doing.”

Enter, however, the president’s son, Donald Trump, Jr., who has been visibly part of the now-indicted men’s efforts to build a privately funded border wall.

Here's Donald Trump Jr.'s testimonial on the We Build The Wall Website. pic.twitter.com/oXnD1gCIzn

In one video from last summer, Don Jr. appeared with the now-criminally-accused Kolfage to extoll the many supposed virtues of the private border wall — in stark contract to his own father’s statements which on Thursday trashed the project as “inferior.”  Naturally, Don Jr., in making the appearance, gushed his father’s virtues to those in attendance and stumped for support for the Trump ticket in 2020.  The core message was that the values of the Administration were aligned wholeheartedly with those building the private border wall; no dissension as to mission or practice seemed apparent during the speech:

Watch the video for yourself:

“Brian, thank you so much for all your sacrifices, doing this, and showing, really, what capitalism’s all about, right?” Don Jr. asked rhetorically of the since-indicted Kolfage. “This is private enterprise at its finest: doing it better, faster, cheaper than anything else, and what you guys are doing is pretty amazing. Uh — it started from a grassroots effort, ah, and is doing wonderful things for an important issue,” Don Jr. said to Kolfage in the video.

Don Jr.’s claims mirrored many of those made in We Build The Wall’s own promotional videos, such as this one.

Don Jr. later accused liberal elites of living behind walls without allowing ordinary Americans to live behind one.  The video and concomitant news reports are invariably dated July 26 and July 27, 2019.  The official video ended with an announcer saying that the “first border wall is built” to “secure our border against illegal immigration, crime, drugs, and human smuggling.”

“We can do more with your help,” the announcer pleads.  “Every mile matters.”  The video ended with a call for more donations to fund the project.

In a separate video, Kim Gullifoyle, the former Fox News host and current Trump 2020 senior advisor who is also Don Jr.’s girlfriend, thanked Kolfage for his service in the military and his “dedication to the country.”

As to Don Jr., she said, “he fights for his dad because his dad is a man who honors his word; he’s kept his promises; and, in fact, exceeded them, and one of them is building the wall.”

Acting U.S. Attorney Audrey Strauss of the Southern District of New York on Thursday had less pleasant things to say about Kolfage.

“As alleged, the defendants defrauded hundreds of thousands of donors, capitalizing on their interest in funding a border wall to raise millions of dollars, under the false pretense that all of that money would be spent on construction,” Strauss said in a press release. “While repeatedly assuring donors that Brian Kolfage, the founder and public face of We Build the Wall, would not be paid a cent, the defendants secretly schemed to pass hundreds of thousands of dollars to Kolfage, which he used to fund his lavish lifestyle.”

Steve Bannon made his own speech at a We Build the Wall event in a video uploaded July 29, 2019 — shortly after Don Jr.’s statements.  Bannon described himself as the chairman of an advisory board at the organization; his speech is available here (cued up).  Bannon claimed the goal of the private wall was to “augment President Trump’s overall plan” in “those little niches where the government has decided, the Army Corps [of Engineers] has decided, that they’re not going to build, that we’re going to build these little niches.”