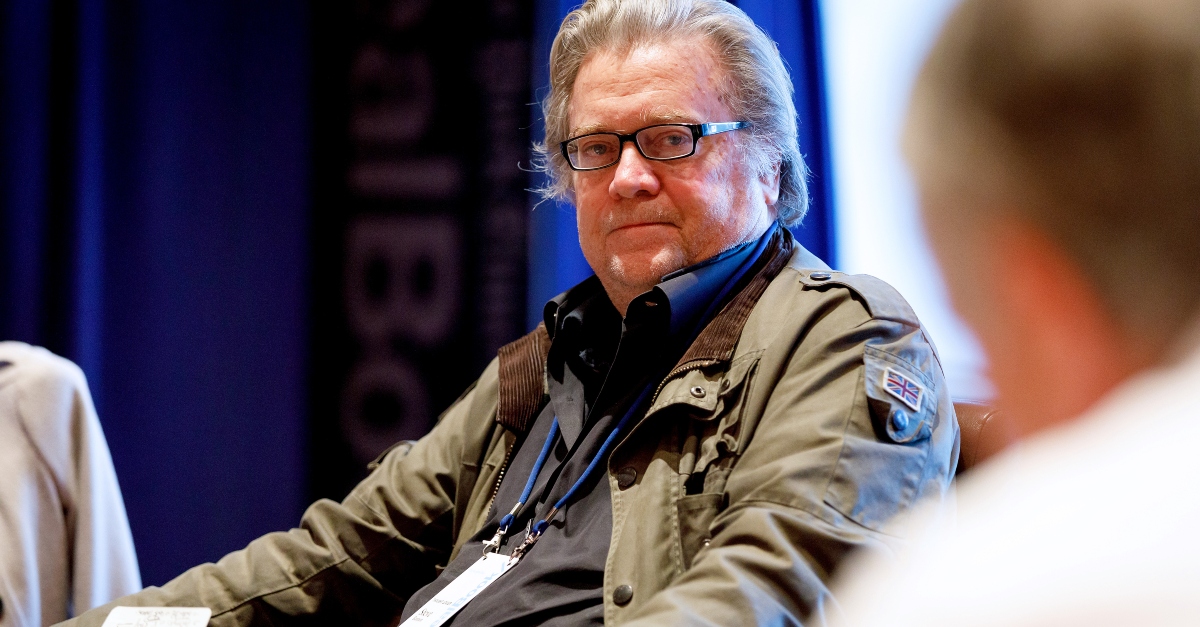 Steve Bannon, the former executive chairman of Breitbart and former chief executive of President Donald Trump‘s campaign, has been charged by federal prosecutors along with three other people in an alleged money laundering scheme. They used money donated for a private border wall to help fund co-defendant Brian Kolfage‘s “lavish lifestyle,” according to The Department of Justice.

“As alleged, the defendants defrauded hundreds of thousands of donors, capitalizing on their interest in funding a border wall to raise millions of dollars, under the false pretense that all of that money would be spent on construction,” Acting U.S. Attorney Audrey Strauss of the Southern District of New York said. ” While repeatedly assuring donors that Brian Kolfage, the founder and public face of We Build the Wall, would not be paid a cent, the defendants secretly schemed to pass hundreds of thousands of dollars to Kolfage, which he used to fund his lavish lifestyle. We thank the USPIS [United States Postal Inspection Service] for their partnership in investigating this case, and we remain dedicated to rooting out and prosecuting fraud wherever we find it.”

We Build The Wall was founded by Air Force vet Kolfage; Bannon is the advisory board chairman.

The indictment says the organization — “We Build the Wall” — raised more than $25 million.  Though the organization promised that Kolfage would “not take a penny in salary or compensation,” that “100% of the funds raised” would go towards a wall on the southern border, and that the group was “a volunteer organization,” Kolfage actually pocketed more than $350K, the indictment reads. Bannon pocketed more than $1 million, some of which he paid back to Kolfage and some of which he kept for his own personal expenses, prosecutors say.  The money was moved around through shell companies and sham contracts, they added; prosecutors also say they have text messages as evidence of the deals the defendants made to enrich themselves.

Kolfage, 38, of Miramar Beach, Fla., and Bannon, 66, of Washington, D.C., are joined by co-defendants Andrew Badolato, 56, of Sarasota, Fla., and Timothy Shea, 49, of Castle Rock, Colo.  They are each charged with one count of conspiracy to commit wire fraud and one count of conspiracy to commit money laundering. More than one person online has noted that Shea shares a name with the DEA’s acting administrator (who was once a D.C. federal prosecutor), but the DOJ describes the defendant Shea separately as above.

“The defendants allegedly engaged in fraud when they misrepresented the true use of donated funds,” said Philip R. Bartlett, Inspector-in-Charge of the New York Field Office of the United States Postal Inspection Service. “As alleged, not only did they lie to donors, they schemed to hide their misappropriation of funds by creating sham invoices and accounts to launder donations and cover up their crimes, showing no regard for the law or the truth.  This case should serve as a warning to other fraudsters that no one is above the law, not even a disabled war veteran or a millionaire political strategist.”

US v Bannon, etc by Law&Crime on Scribd

[Image via Mike Cohen/Getty Images for The New York Times]