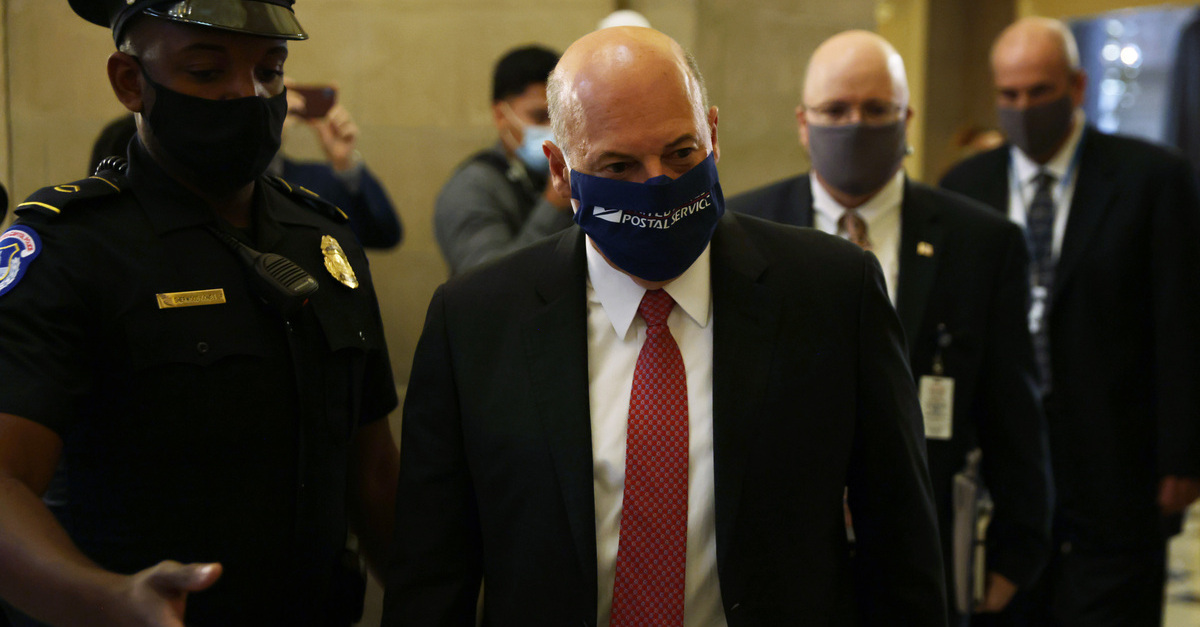 U.S. Postmaster General Louis DeJoy should be subject to a federal criminal investigation over recent changes to the U.S. Postal Service (USPS), according to a complaint filed late Thursday by a nonprofit and non-partisan government accountability watchdog.

Citizens for Responsibility and Ethics in Washington (CREW) sent an 11-page criminal complaint to the Federal Bureau of Investigation (FBI) alleging that DeJoy improperly used his office to sabotage mail operations in order to undermine mail in voting for the 2020 general election. The group claimed that this alleged monkey-wrenching effort was enacted “for the benefit” of President Donald Trump.

“Postmaster General DeJoy directed or implemented numerous policy changes that will undermine voting by mail in November,” the complaint notes. “According to internal USPS memos, DeJoy directed USPS employees that overtime would be prohibited and that they were prohibited from making late trips in order to ensure timely delivery. DeJoy offered these changes as a way to cut costs but USPS has acknowledged that they will likely result in delayed mail delivery for a period of time.”

Citing two criminal provisions of the Hatch Act–a law which is typically used to prohibit executive branch employees from engaging in certain electioneering activities–the group claims that “the speed and scale of the dramatic changes made” in recent months “warrant investigation by federal law enforcement” because those changes have resulted in “the detriment of voting by mail” to Trump’s “potential benefit,” according to the president himself.

“Here, there is ample evidence to suggest that DeJoy’s conduct violated 18 U.S.C § 610,” the complaint alleges. “It is not in dispute that Postmaster DeJoy has made numerous policy changes since arriving at USPS that have the effect of causing delays in the delivery of mail. These reports have been well documented, and the Postmaster General admitted as much in public to the Board of Governors and private statements to USPS employees and congressional leaders.”

CREW admits that the use of the authority is somewhat novel:

While there are very few cases interpreting Section 610, the USPS policy changes implemented and overseen by USPS employees at the direction of Postmaster DeJoy and leading to delays in the delivery of mail-in ballots could be considered a “contribution” to candidate Trump…Trump has made abundantly clear that he believes the use and expansion of voting by mail would have a detrimental impact on his election and the election of Republicans officials in other government positions. Trump’s opposition to voting by mail was expressed during the period of DeJoy’s recruitment to serve as Postmaster General and reiterated by Republican Party leadership. As a member of the Republican Party’s fundraising team for its national convention, it is hard to imagine that DeJoy was unaware of the president’s or the party’s active opposition to voting by mail when he was appointed or when he assumed the role of Postmaster General during his tenure at USPS. Advancing that agenda against voting by mail, which the president clearly believed would benefit his reelection, appears to be a political contribution to candidate Trump.

The letter to FBI Director Chris Wray also cites 18 U.S.C. § 595, which, according to the U.S. Department of Justice, “is aimed at the misuse of official authority.”

“After DeJoy began his tenure at USPS, it appears that every major policy decision made by DeJoy had the effect of hampering voting by mail, including cuts to overtime and effectively raising the cost of sending mail-in ballots to voters,” the complaint goes on. “DeJoy’s numerous, sweeping policy changes were made in close succession over the course of just his two months on the job, despite push back from postal workers, Congress, and the public.”

Internal communications within the USPS regarding DeJoy’s motivation for these changes would provide more clarity regarding his intent in making these changes, but to date, DeJoy has not been fully responsive to requests for such documents and information from Congress and the good government community. Further investigation to shed more light on DeJoy’s intent is essential. While DeJoy abruptly announced plans to halt some of his questionable policies, this decision came only after a hearing announcement from Senate Republicans, providing more support for concern about DeJoy’s partisanship. Given all the context surrounding DeJoy’s actions, these consequences don’t appear to be unintended, but instead governmental decisions based on DeJoy’s intent to influence the vote for or against President Trump.

“Laws exist to ensure that the government pursues the national interest—not the personal political interests of the president,” CREW Executive Director Noah Bookbinder said in a statement. “DeJoy’s attacks on the Postal Service’s ability to deliver the mail, apparently in order to help the president politically, should outrage all Americans. This behavior isn’t just wrong, it appears to be criminal. The FBI must investigate.”

“By using his official position and authority to direct policy changes at USPS to the benefit of President Donald Trump, a candidate in a partisan election, Postmaster General DeJoy may have violated multiple criminal provisions of the Hatch Act,” the complaint/letter concludes. “CREW respectfully requests that the FBI immediately commence an investigation into DeJoy’s conduct and take appropriate action.”

CREW Complaint re: DeJoy by Law&Crime on Scribd