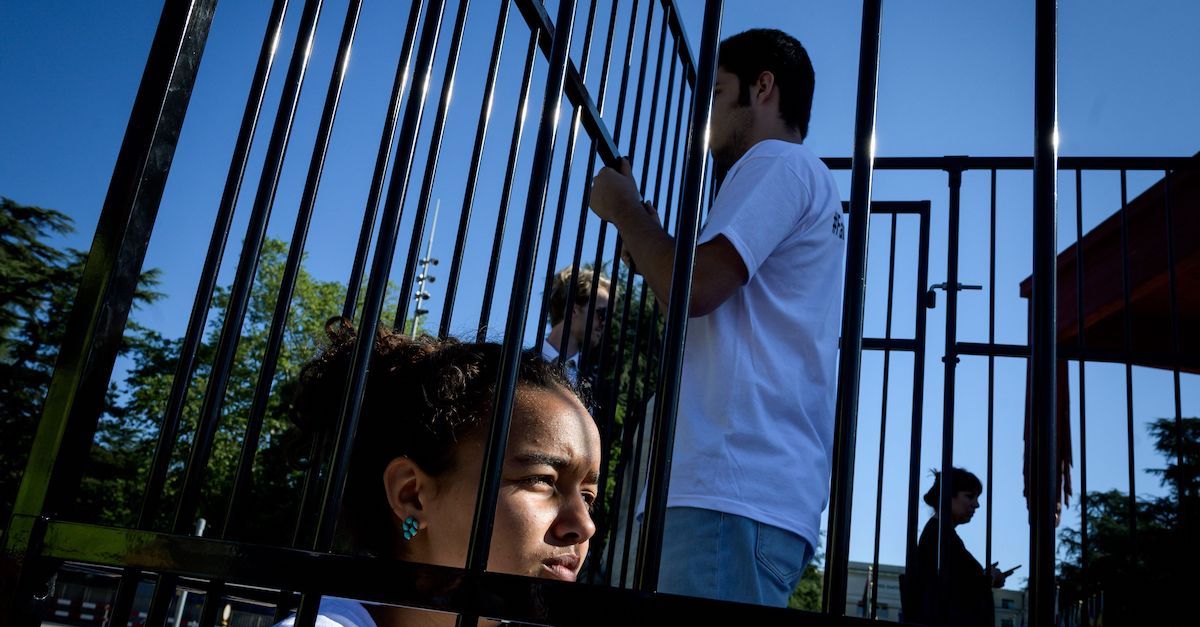 Teenagers are seen in a cage during a protest of international labor groups, civil society and students against the policy of migrant family separation along the US-Mexico border on June 17, 2019 in front of the United Nations offices in Geneva.

Repeating the refrain “families belong together,” President Joe Biden signed a suite of executive orders on Tuesday, with the top item on the list creating a task force to reunite parents and children divided under his predecessor’s family separation policy. Immigration advocates say anybody charged with this task will have to focus on transparency, accountability and involving the stakeholders.

“This task force will work across the U.S. government, with key stakeholders and representatives of impacted families, and with partners across the hemisphere to find parents and children separated by the Trump Administration,” the White House announced in a fact sheet this morning, prior to the signing of the orders. “The task force will make recommendations to the President and federal agencies regarding steps that they can take to reunify families. Further, the task force will report regularly to the President and recommend steps to prevent such tragedies from occurring again. This Order also revokes the Trump Administration’s Executive Order that sought to justify separating children from their parents.”

The White House did not immediately respond to an email seeking more details about the composition and mechanics of the task force, and by press time, the administration released only an executive order announcing a separate White House Domestic Policy Council, dedicated to broader immigration policy.

But immigration advocates believed that involving stakeholders in the family separations corrective would be crucial for its success.

“It remains to be seen how extensive, how formal the [non-governmental organization] community will be able to participate,” Claudia Valenzuela, senior attorney at the American Immigration Council, told Law&Crime in a phone interview. “But I certainly hope that that will be very much a part of this task for. It’s crucial in my view that the NGO sector that has relationships and ties to the families who were impacted by this policy to have a voice at that table in terms of all of the objectives.”

Part of the task force’s work will be arriving at an accurate number of the families separated.

Valenzuela noted that this estimate presently “hovers between 600 and 700” separated parents and children.

“I think that the number could certainly be higher, and again, without having official backing, it can be difficult to really piece together,” she added.

Her colleague Tory Johnson from the same non-profit also urged Biden to push for a more transparent historical record and accountability. The group noted that the Departments of Homeland Security and Heath and Human Services have not shared any evaluations of the harm of the programs.

“A full record will help ensure accountability for the past and prompt the Biden administration to enact changes so that families are never again torn apart at the hands of the U.S. government,” Johnson said.

Though the now-rescinded zero-tolerance rule associated with family separations was a Trump creation, parents and children were separated in limited instances under the Obama administration when authorities suspected fraud or abuse that would endanger the child.

Trump administration exploited this pretext to advance their policy goals, Valenzuela said, adding that more protections are needed to prevent that in the future.

“There will be instances in which, if you cannot prove the parent-child relationship or if the parent is unfit, that that would result in the separation of parents and children,” Valenzuela added, noting the need to safeguard against erroneous determinations.

Another executive order will rescind Trump administration policies all but hobbling the asylum process, which had let in no more than 15,000 refugees last year in comparison to the 110,000 approved during the last year of the Obama administration.

A third order would empanel another task force to review hurdles to legal immigration.

House Speaker Nancy Pelosi praised Biden’s moves as a roadmap for a “more fair, orderly and humane and our nation more safe, strong and prosperous.”

“These Executive Actions honor our values by reunifying separated families, reforming our asylum process and promoting inclusion of new Americans into our communities,” Pelosi said. “And they restore sanity and common sense to our immigration system—replacing the chaos and cruelty of the Trump approach with stepped-up and more constructive engagement with our partners in the region to address the root causes of migration.”