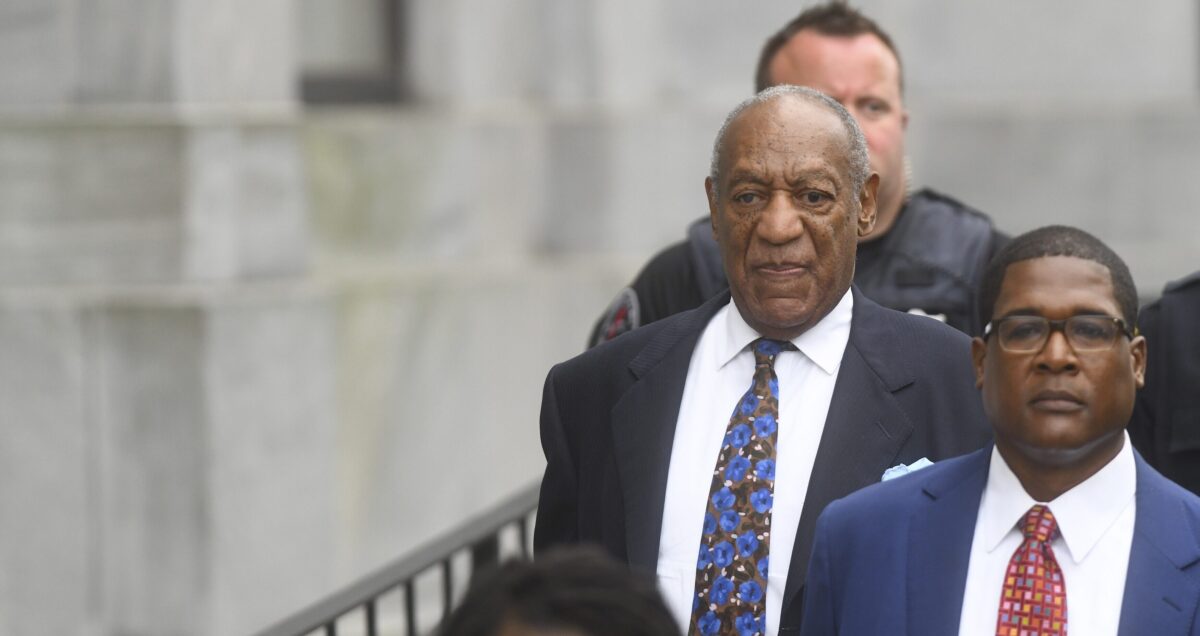 Bill Cosby departs the Montgomery County Courthouse on the first day of sentencing in his sexual assault trial on September 24, 2018 in Norristown, Pennsylvania. In April, Cosby was found guilty on three counts of aggravated indecent assault for drugging and sexually assaulting Andrea Constand at his suburban Philadelphia home in 2004.

Disgraced comedian Bill Cosby’s appeal to Pennsylvania’s highest court, a bid to overturn his prison sentence for aggravated indecent assault, focused primarily on five of the sexual misconduct allegations not charged by prosecutors.

Justices from the Supreme Court of Pennsylvania sharpened their focus on Tuesday on whether a trial judge was wrong to let a jury hear five instances of Cosby’s “prior bad acts,” allegations ranging from rape to impropriety that were uncharged in any indictment.

“Why did you need prior bad acts evidence at all?” asked Justice Debra Todd, in an inquiry shared by many of her colleagues.

During Cosby’s second trial, prosecutors persuaded a jury that Cosby sexually assaulted Temple University employee Andrea Constand, and they defeated the comedian’s claim that the incident was consensual through evidence that it was a pattern of behavior. At least 60 women have accused Cosby of everything from rape to sexual harassment; Pennsylvania aired uncharged allegations from five of those women. Cosby was sent to prison for three to 10 years for assaulting Constand, a sentence with the earliest release date of Sept. 25, 2021.

Cosby’s lawyer Jennifer Bonjean argued that a trial judge should have silenced those accounts as a prejudicial effort to indict her client’s “entire life.”

“It is now common knowledge that a defining tenet of the #MeToo movement is to believe women without question or scrutiny,” Bonjean wrote in an appellate brief before today’s arguments. “Questioning a woman’s allegation of abuse is verboten in the era of #MeToo.”

Neither the prosecution nor the defense mentioned the cultural backdrop of the #MeToo movement during oral arguments, but its themes and messages lurked in the background of the April 2018 convictions, which fell less than a year after the sexual abuse allegations against Harvey Weinstein propelled the hashtag into the public zeitgeist.

“Mr. Cosby did not face any of these accusations prior to the charged offense,” Bonjean said.

Asked whether the other women accusing Cosby ever reported their allegations to authorities, Assistant District Attorney Adrienne Jappe answered no before adding that a few told other people shortly after the incidents. Jappe added that many women do not report sexual misconduct by powerful men for a long time. Cosby complained that some of the prior bad act witnesses fought to abolish the statute of limitations for sex crimes.

For Cosby, Jappe said, these witnesses illustrated a pattern of behavior.

“His plan was to intoxicate young women to eliminate consent,” Jappe told the justices.

Justice Max Baer noted that the Commonwealth sought to introduce 19 prior bad acts before the trial judge whittled that number down to five.

Jappe, the prosecutor, cited that as evidence that the judge sought to avoid undue prejudice and, if there was any error, it was harmless.

Another feature of Cosby’s defense related to a press release issued by former District Attorney Bruce Castor, Jr., declining to prosecute the comedian.

Now claiming that he relied upon that when agreeing to testify in a deposition ultimately used against him, Cosby argues that it should have been suppressed, but Assistant District Attorney Robert Falin told the court no such promise was made. The press release itself stated: “District Attorney Castor cautions all parties to this matter that he will reconsider this decision should the need arise.”

This argument from Cosby’s team fared more poorly with the justices, with Justice Kevin Dougherty questioning how he could find that a celebrity with the resources and knowledge of the legal system was tricked into forfeiting his Fifth Amendment rights.

Even Cosby’s attorney grappled with that point.

“We can’t wrap our head around why someone would sit for a deposition with a criminal prosecution looming in such a serious matter,” Bonjean acknowledged, before adding that this was evidence that Cosby thought prosecution was in the rear view mirror.

Prosecutor Falin added that this argument did not wash. Any promise perceived to have been made by a Pennsylvania prosecutor could not have bound the women accusing him in New York and California—and prosecutors who potentially could have had their ear.