‘Only the Most Serious Sanction Is Sufficient’: Feds Seek Life Sentence for Michigan Man Convicted in Gov. Whitmer Kidnapping Plot 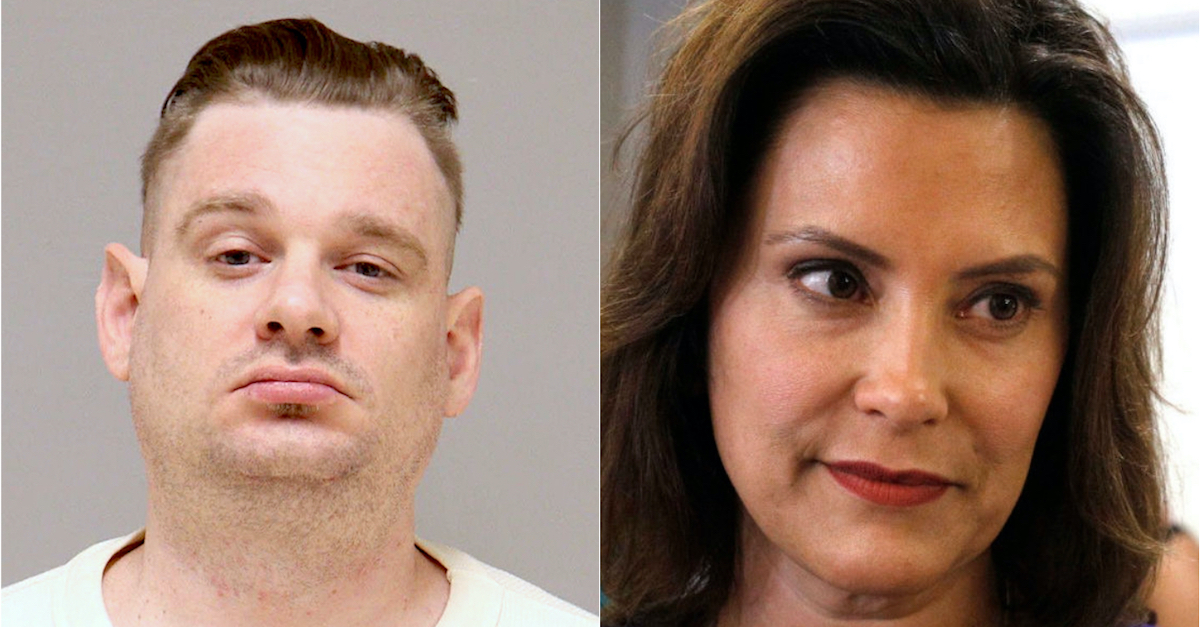 After a second jury rejected his entrapment defense, a Michigan man convicted of a plot to kidnap Gov. Gretchen Whitmer (D) faces the possibility of spending the rest of his life behind bars.

On Monday, federal prosecutors sought to impose that maximum punishment against Adam Fox.

“When the aim of that kidnapping is to terrorize the people and affect the conduct of government, it is so pernicious that only the most serious sanction is sufficient,” Assistant U.S. Attorney Nils R. Kessler wrote in a blistering sentencing memo.

In the U.S. federal system, life sentences do not carry the possibility of parole.

“It Was a Bona Fide ‘Revolution'”

For prosecutors, the punishment fits the “terrorist acts” that Fox sought to perpetrate.

“This was no ‘run of the mill’ kidnapping plot,” the memo states. “He targeted not just any victim, but an official victim; and not just any official, but the head of a state. He was no follower; he was an active recruiter and prime mover. The terrorism enhancement here literally takes Fox’s Guideline score off the chart. But it applies. His goal was not personal gain; it was a bona fide ‘revolution.'”

When prosecutors unveiled charges against Fox and his co-defendants in October 2020, the indictment called attention to profound turmoil in the United States, less than a month away from the presidential election. The alleged kidnapping plotters expressed deep opposition to COVID-19 lockdowns, referring to Whitmer as a “tyrant” for policies encouraging physical distancing. Nationwide protests took thousands out of social isolation and out into the streets for racial justice protests, which sometimes devolved into riots.

Amid this social unrest, then-President Donald Trump stoked unfounded fears about the reliability of mail-in voting, which would ultimately boil over into a storming of the U.S. Capitol on Jan. 6, 2021. The federal indictment of Fox and five of his suspected co-conspirators had been widely viewed as a harbinger of the threat of domestic terrorism in a divided nation. Threats against other elected officials soon proliferated.

“If our elected leaders must live in fear, our representative government suffers,” the sentencing memo noted. “A plan to kidnap and harm the Governor of Michigan is not only a threat to the officeholder but to democracy itself.”

Just as the case reflected the national divisions of the time, the prosecution ignited its own controversy once the FBI’s infiltration of the group became apparent. Along with Fox, the other defendants — Barry Croft Jr., Daniel Joseph Harris, and Brandon Caserta — accused the government of entrapment. Two others, Ty Garbin and Kaleb Franks, pleaded guilty, with the latter specifically telling a judge that he and others were “not entrapped.”

In the post-9/11 era, the FBI has increasingly sent informants to penetrate foreign and domestic extremist groups in an effort to prevent terrorist attacks. Law enforcement groups defend that practice under the banner of so-called “preventative policing.” Civil libertarian groups have denounced the practice, often comparing it to the fictionalized “precrime” of the science fiction story turned Hollywood blockbuster Minority Report.

Though routinely alleged in domestic and foreign terrorism cases, entrapment claims are difficult to prove: They require a jury to find defendants were not predisposed to commit the crimes charged and would not have done so absent an inducement. On this question, two sets of juries remained divided. The first convicted Harris and Caserta — but hung on Fox and Croft, who were two of the defendants also charged with weapons of mass destruction charges.

Both men were ultimately convicted by the second jury, and prosecutors said that both deserve heavy punishment.

“The sentence imposed by this Court should reflect the incredibly dangerous threat posed by Adam Fox and Barry Croft’s attempt to light the fire of a second revolution,” the memo states.

The government’s sentencing memo caps off with a quotation from former President Gerald Ford found on the federal courthouse: “Our Constitution works; our great Republic is a government of laws and not of men.”

“This Court’s sentence should affirm that message by demonstrating the rule of law will defend itself against political violence and anti-government extremism,” the memo concludes.

(Image of Fox via mugshot; photo of Whitmer by Bill Pugliano/Getty Images)