No, Trump Jr. Almost Certainly Didn’t Commit a Crime by Trying to Get Dirt from Russian Lawyer 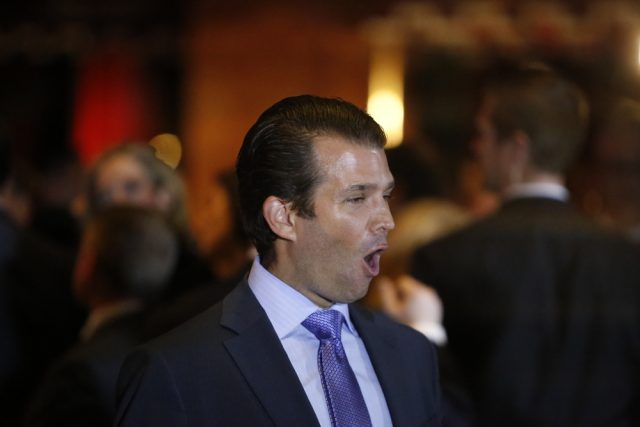 The reactionary outrage machine has kicked into high gear once again after  The New York Times reported that Donald Trump Jr. met with Russian attorney Natalia Veselnitskaya in an attempt to dig up dirt on Hillary Clinton.

The shrillest quickly raised their standard and started sharpening knives for Trump Jr.’s surely-and-certainly self-inflicted wound that would lead to criminal charges. So, let’s investigate what those charges might be. But first, an examination of the purportedly damaging confession and the facts.

Here’s what Trump Jr. admitted to (with some shifting in his story): “I was told [Veselnitskaya] might have information helpful to the campaign.” He continued, essentially casting the meeting as a fruitless waste of time and showcasing an uncanny ability to be hoodwinked by a lawyer with an ulterior motive. As it turns out, the claims that “information helpful to the campaign” would be provided during the meeting were nothing but subterfuge.

“After pleasantries were exchanged, the woman stated that she had information that individuals connected to Russia were funding the Democratic National Committee and supporting Ms. Clinton. Her statements were vague, ambiguous and made no sense. No details or supporting information was provided or even offered. It quickly became clear that she had no meaningful information. She then changed subjects and began discussing the adoption of Russian children and mentioned the Magnitsky Act…the claims of potentially helpful information were a pretext for the meeting.”

So who exactly is the woman who pulled a fast one on Donald Trump, Jr.?

Using anonymous sourcing, The New York Times ran with the supplementary pejorative that the quicker-witted-than-Trump attorney in question is Kremlin-linked. The paper of record then proceeded to bolster their claim using thin idea association–Veselnitskaya supports an issue the Russian government supports.

But to be clear: Veselnitskaya is not an agent of the Russian government. She’s a private citizen with an interest in politics who seems to have snow-jobbed Donald Trump Jr. (apparently not a difficult task).

Treason is a specific crime listed in the U.S. Constitution. Article III § 3 reads, in relevant part, “Treason against the United States, shall consist only in levying War against them, or in adhering to their Enemies, giving them Aid and Comfort.”

Painter later attempted to soften his charge on MSNBC, saying that Trump Jr.’s meeting “borders on treason,” but that’s quite a bit different from actual treason. It’s also a mealy-mouthed way of legally saying nothing at all. And, even then, it’s also completely wrong.

Laurence Tribe, a liberal legal icon of sorts, said: “Attempted theft of a presidential election in collusion [with] Putin is a serious felony and a high crime against the state.”

There’s a bit more to unpack here, but Tribe is essentially off-base as well. The legal concept of collusion itself is probably not codified in any context aside from antitrust law. But let’s be cautious here: the broader concept of “collusion” (i.e. not a legal term of art) could certainly qualify as illegal under certain tangential circumstances.

Tribe’s twitter diatribe, however, doesn’t clarify any such circumstances at all. His tweet is comprised of one buzzphrase-caliber accusation (“attempted theft of a presidential election”) with a legal-sounding outcome that probably only exists in Laurence Tribe’s own mind (“a serious felony and a high crime against the state.”)

But aside from Tribe’s unhelpful histrionics, there actually is something worth looking into here.

But it takes two to illicitly tango. Additional sections of the same statute read:

Donald Trump Jr.’s legal liability, therefore, seemingly hinges upon whether Veselnitskaya’s offer of apparently non-existent information was a “thing of value…in connection with [an] election.” Just Security‘s Bob Bauer would likely argue that such information was such a thing of value. In one sense, of course, damaging information on a political opponent is clearly valuable. But whether nonsensical accusatory words over less-than-lunch qualify as a “thing of value” under the law is hardly the slam dunk that Trump’s detractors say it is. It’s very likely a Moscow-bound bridge too far.

Critics are likely to contend, however, that simply the offer of such information is what counts here. So, let’s return to the statute itself. One reading could support this interpretation. Essentially the law would say: “A foreign national shall not…promise to make a contribution…in connection with [an] election.” Under that reading, Trump Jr. taking the meeting with Veselnitskaya could put him in jeopardy under section (g) above–but it’s still unlikely to see how section (h) would be satisfied here.

But that’s just one reading of the statute. Another would seem to foreclose against any liability for Trump Jr. at all–assuming this statute is even glanced at by Mueller, et, al. The friendlier reading suggests that “thing of value” should be read in the context of the company it keeps. This means something physical, like a monetary donation, campaign advertisement, or phone banking tables–or at least physical labor, like helping to solicit fundraising or doing the actual phone-banking — not merely providing information. This is the most likely reading of the statute.

Over all, Trump Jr.’s harebrained meet-and-great with Veselnitskaya might have been ill-advised, but it probably was not in violation of the rules against receiving or soliciting contributions from foreign nationals.

Some have accused Team Trump of Logan Act violations. But, again, Veselnitskaya is not an agent under the official employ of the Russian Union. So this is a stretch that leaves those doing the stretching flat on their face from overreach.

The Washington Post‘s Callum Borchers swooped in to state: “Trump Jr.’s attempt to obtain information from a Russian lawyer that could harm Clinton seems likely to alarm investigators, regardless of whether the effort proved successful.” Well, sure, if the investigators in question are of the Eric Garland or Louise Mensch sort.

How about the generally messy accusations of illegality here? Again, Richard Painter: “[Trump Jr.] must have known that the only way Russia would get such information was by spying.” But, well, not really. There was no official acknowledgment of Russian influence in the 2016 presidential election until October 8, 2016; Trump Jr.’s half-hour chat with Veselnitskaya occurred four months before that.

What seems to elude Trump Jr.’s critics here is the fact that there have to be certain laws in existence in order for the law to be broken. As it stands, those laws probably just aren’t there.