Avenatti, whose feud with Collins began in earnest during the Brett Kavanaugh confirmation hearings of 2018, mocked Collins after coming across a tweet that said the following: “LMAO: Only 13 Mainers gave $200 or more to Susan Collins in latest quarter.” After making no promises as to how she would vote given the sexual assault allegations against Kavanaugh, plus questions about his abortion stance, Collins eventually decided to vote in favor of Kavanaugh’s confirmation. The vote was 50-48.

Here’s how Avenatti reacted to the news about Collins’ fundraising.

“It appears that the great people of Maine are well aware that Susan Collins is the biggest fraud in the Senate. And that’s saying something,” Avenatti said. “Nothing worse than a woman who claims to stand for women’s rights but who then constantly works against them.” 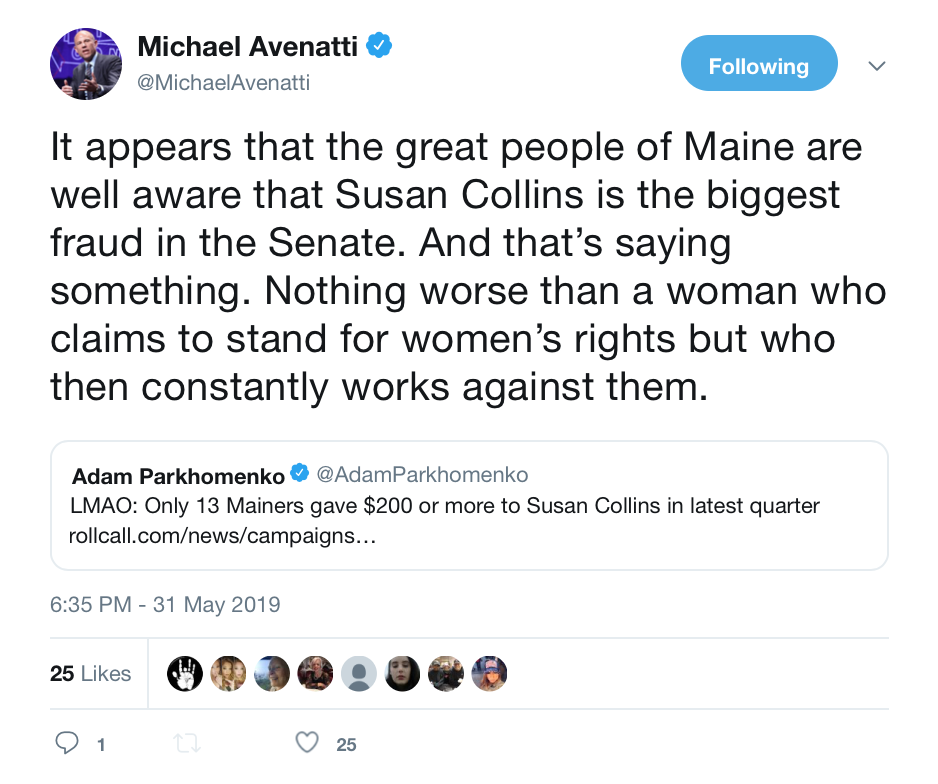 “[N]o monies relating to Ms. Daniels were ever misappropriated or mishandled. She received millions of dollars worth of legal services and we spent huge sums in expenses. She directly paid only $100.00 for all that she received. I look forward to a jury hearing the evidence,” Avenatti said of the allegations related to Daniels.

Avenatti was also accused in New York of attempting to extort Nike; he denied the allegation. Avenatti has called Collins the “biggest fraud in the Senate” before.

That time, April, 19, 2019, Avenatti was criticizing Collins for downplaying the Mueller Report as an “unflattering portrayal” of President Donald Trump.

Eight days before that tweet, Avenatti was indicted in his home state of California on 36 charges, including bankruptcy fraud, wire fraud, tax evasion and embezzlement. Among other things, Avenatti was accused of hiding a $4 million settlement from a “mentally ill paraplegic” client.

He has consistently denied wrongdoing, and says the truth will come out. Avenatti responded on Twitter after the April 11 indictment, saying that he’s made a lot of “powerful” enemies over two decades.

“For 20 years, I have represented Davids vs. Goliaths and relied on due process and our system of justice. Along the way, I have made many powerful enemies. I am entitled to a FULL presumption of innocence and am confident that justice will be done once ALL of the facts are known,” he said.