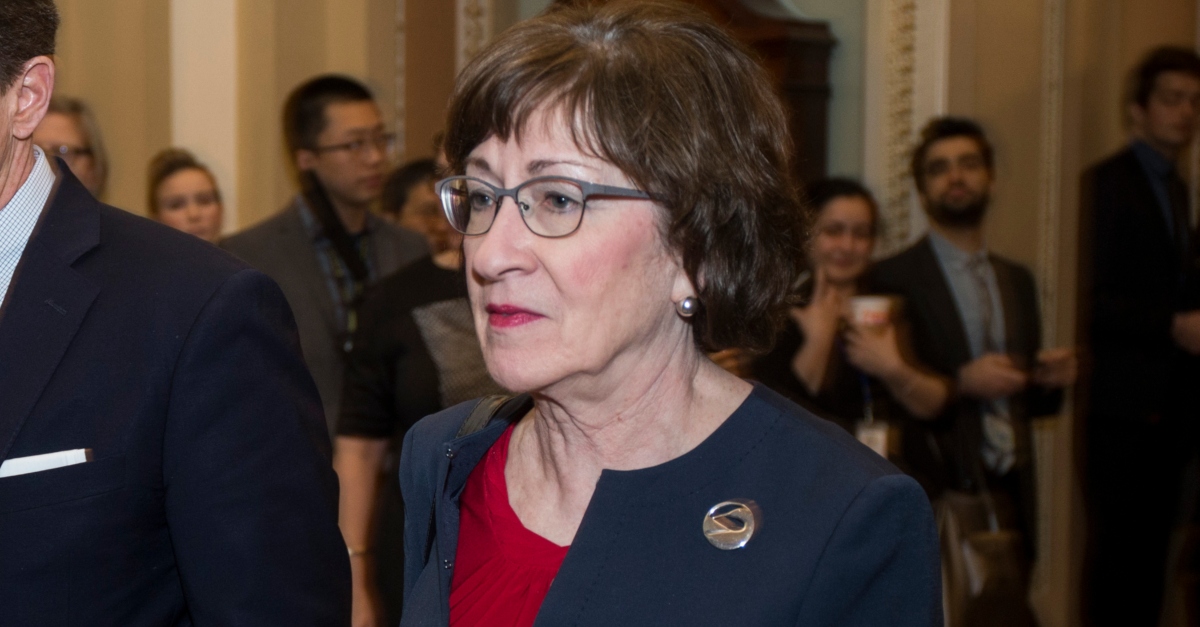 Sen. Susan Collins‘ (R-Maine) response to obstruction-related items detailed in Special Counsel Robert Mueller‘s report is not being received particularly well online. Although Collins said in an interview that Russia’s efforts to interfere in the 2016 election are a “serious threat to our democratic institution,” everyone is focusing on how she responded to details of President Donald Trump‘s conduct, including that he tried to have Mueller fired and took steps to thwart the investigation.

Collins concluded that this was an “unflattering portrayal of the President.”

“[Trump] was not only very upset by the special counsel’s investigations, but tried several times through intermediaries to end it, and it is an unflattering portrayal of the President,” Collins said. She then said that she “found the report to be a very thorough undertaking” and that it seems to have “changed very few minds in Washington.”

This, plus lines from Mueller indicating that Department of Justice policy of not indicting a sitting president very much played a role in his decision making, have led many to conclude that Mueller was making an impeachment referral.

This is true. Volume II is plainly an impeachment referral. https://t.co/760LUkAtor

The republic faces an unprecedented threat from within and the only tepid condemnation this politician can muster is a ho-hum "unflattering portrayal." Good thing we had legislators made of sterner stuff in the 40's.

Senator Collins, when you lose your seat in 2020, I hope the press accounts of your spineless, unprincipled failure of leadership also feel “unflattering” to you.

Lol Susan Collins is “an unflattering portrayal” of an elected official https://t.co/H7R9dKyw32

Not hard to figure out why it was Susan Collins even more than Trump who convinced me to bail on the GOP.

It seems some have not forgotten either about how Collins responded to the allegations against now-Supreme Court Justice Brett Kavanaugh.

The biggest fraud in the Senate.

My new dish soap is as easy on your hands as Susan Collins is on Republican men credibly accused of crimes including sexual assault. https://t.co/I8boSYgHOM

After making no promises as to how she would vote given the sexual assault allegations against Kavanaugh, plus questions about his abortion stance, Collins eventually decided to vote in favor of Kavanaugh’s confirmation. The vote was 50-48.