Who Are Matt Gaetz’s Defense Lawyers?

Matt Gaetz Has Lawyered Up: What to Know About His Defense Team 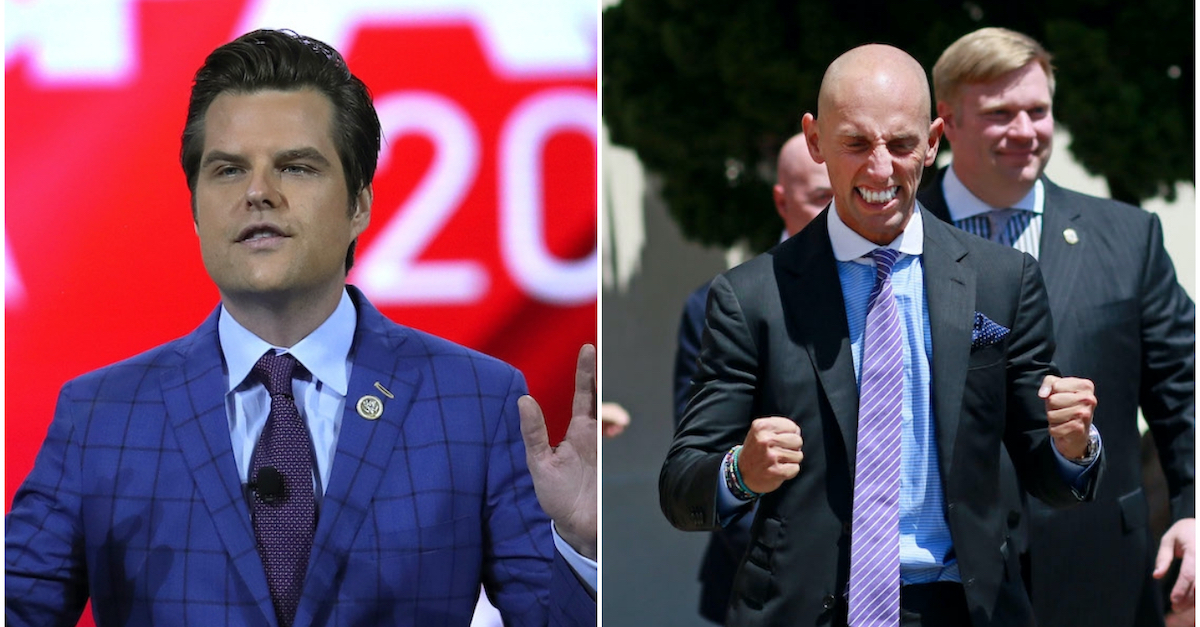 Rep. Matt Gaetz (R-Fla.) speaks at CPAC on the left. Gaetz’s new lawyer Marc Mukasey is on the right.

The revelation, first reported by NBC and confirmed by Gaetz’s new defense attorneys in emails to Law&Crime, highlights that the Trump-loyalist congressman could be girding for prosecution amid a drumbeat of headlines about a federal sex-trafficking investigation into whether he paid to transport a 17-year-old girl across state lines for sex.

“Matt has always been a fighter,” Erin Elmore, from the crisis communications firm Logan Circle Group, wrote in a statement to Law&Crime. “A fighter for his constituents, a fighter for the country, and a fighter for the Constitution. And he’s going to fight back against the unfounded allegations against him. His legal team, led by Marc Mukasey and Isabelle Kirshner, will take the fight to those trying to smear his name with falsehoods.”

Mukasey, who has represented the Trump Organization, is a close associate of Rudy Giuliani and helped convicted war criminal turned conservative cause célèbre Eddie Gallagher duck the most serious charges against him at his court martial. Gallagher, a decorated 19-year Navy SEAL deployed eight times to Iraq and Afghanistan, was acquitted of murder and attempted murder, but he was convicted of posing for a picture with the corpse of a dead prisoner from the Islamic State group.

Michael Mukasey, the father of Gaetz’s new lawyer, is a longtime Republican heavyweight in the legal community. He was a former Southern District of New York judge appointed to the bench by Ronald Reagan and was U.S. Attorney General under George W. Bush from late 2007 to early 2009.

In a multibillion-dollar money laundering case that embarrassed the Turkish government, the elder Mukasey and Giuliani both represented the ringleader of the scheme: a gold trader named Reza Zarrab, who later became a government cooperating witness who implicated Turkey’s strongman ruler Recep Tayyip Erdoğan. The elder Mukasey and Giuliani unsuccessfully tried to forestall that fate by shuttling between the United States and Turkey in a quasi-diplomatic mission to execute a prisoner swap.

That effort, which involved a reported White House meeting with Trump and his ex-Secretary of State Rex Tillerson, raised questions about what critics called Trump’s compromised and cozy relationship with the Erdoğan government.

One of Trump’s biggest boosters in the U.S. Congress, Gaetz has received slim support from the 45th president, who released a statement disputing a New York Times report that the congressman asked him for a pardon and added that it “must also be remembered that he has totally denied the accusations against him.”

When news of the investigation first broke, Gaetz claimed that the allegations stemmed from an effort to extort him and were politically motivated. Subsequent reports revealed that while there appeared to have been an alleged attempt to extort Gaetz, the attempt occurred after the sex-trafficking investigation began. The probe also reportedly originated during the tenure of Trump’s attorney general Bill Barr, a detail splashing cold water on Gaetz’s theories of a Democratic plot inside the Department of Justice.

Former federal prosecutor and legal commentator Renato Mariotti predicted that a newly lawyered up Gaetz will start heeding the likely advice of his counsel to remain silent.

Mukasey is a very good lawyer. I suspect this means we will be hearing less from Gaetz in the weeks to come. https://t.co/4bNMe5ufjZ

As for Mukasey’s co-counsel, Kirshner has been known as a vocal opponent of Trump. She reportedly called Trump a “scourge” and an “existential threat” in an interview with the New York Law Journal, which profiled the Clayman & Rosenberg partner’s habit of taking on unpopular cases after she received an award from the defense bar.

Rep. Gaetz has not been charged.

[Photo of Gaetz at CPAC via Joe Raedle/Getty, and Mukasey by Sandy Huffaker/Getty Images]