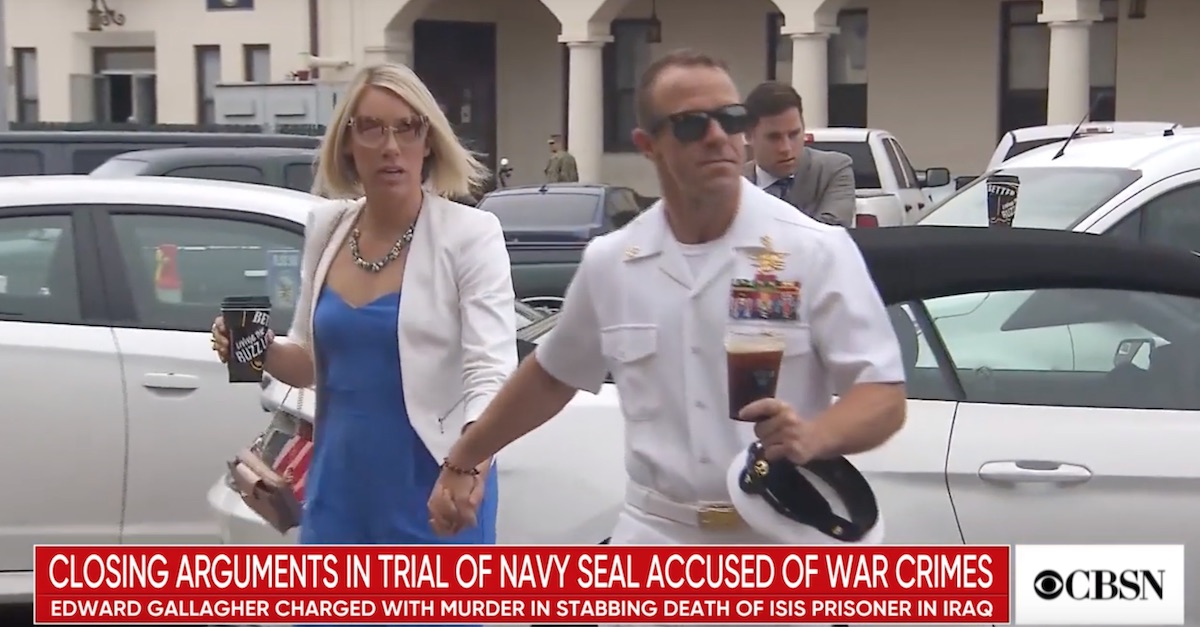 A few days after the prosecution and the defense made closing arguments in the war crimes trial of 40-year-old Navy SEAL Special Operations Chief Edward “Eddie” Gallagher, a military jury decided on Tuesday to acquit Gallagher of premeditated murder and attempted murder charges. Gallagher was acquitted of all charges except the one for posing for a picture with the corpse of a dead ISIS prisoner.

U.S. Navy Seal Eddie Gallagher acquitted in war crimes trail in San Diego of murder and all other charges except posing in photos of Iraqi captive.

Gallagher’s court martial stemmed from allegations that in 2017 he stabbed and killed a 17-year-old ISIS militant who was in U.S. custody as a prisoner after being wounded in an air strike. The charge related to the photograph is punishable by up to four months behind bars, but Gallagher was already jailed 201 days pre-trial and will be credited for time served.

#BREAKING: Verdict in Eddie Gallagher court-martial. Only found guilty for posing with photos of dead Islamic State fighter. Maximum sentence of 4 months, he will get credit for serving 201 days pre-trial. @CourthouseNews

Gallagher, a decorated 19-year vet deployed eight times to Iraq and Afghanistan, was also accused by fellow SEALs of shooting at civilians.

While Gallagher responded to the acquittal with “tears of joy, emotion, freedom and absolute euphoria,” prosecutors were reportedly “visibly upset by the turn of events.” Gallagher did not testify.

Not Guilty of Murder!

The jurors were composed of two sailors and five Marines. One of the jurors was a SEAL. The panel needed at least five votes to convict.

The most shocking moment of the trial came when SO1 Corey Scott was called to testify for the government. As a primary prosecution witness, it was expected that Scott would corroborate the allegation that Gallagher killed the ISIS militant. Scott, who was granted immunity, testified that Gallagher did stab the ISIS prisoner in the neck, but wasn’t responsible for his death. Scott said he himself put his thumb over the prisoner’s breathing tube, causing him to die.

Others, like Marine Staff Sgt. Giorgio Kirylo, said he observed no stab would. An Iraqi general also said he didn’t see Gallagher stab the prisoner.

Gallagher’s defense promised all along that it would “annihilate the government’s case.”