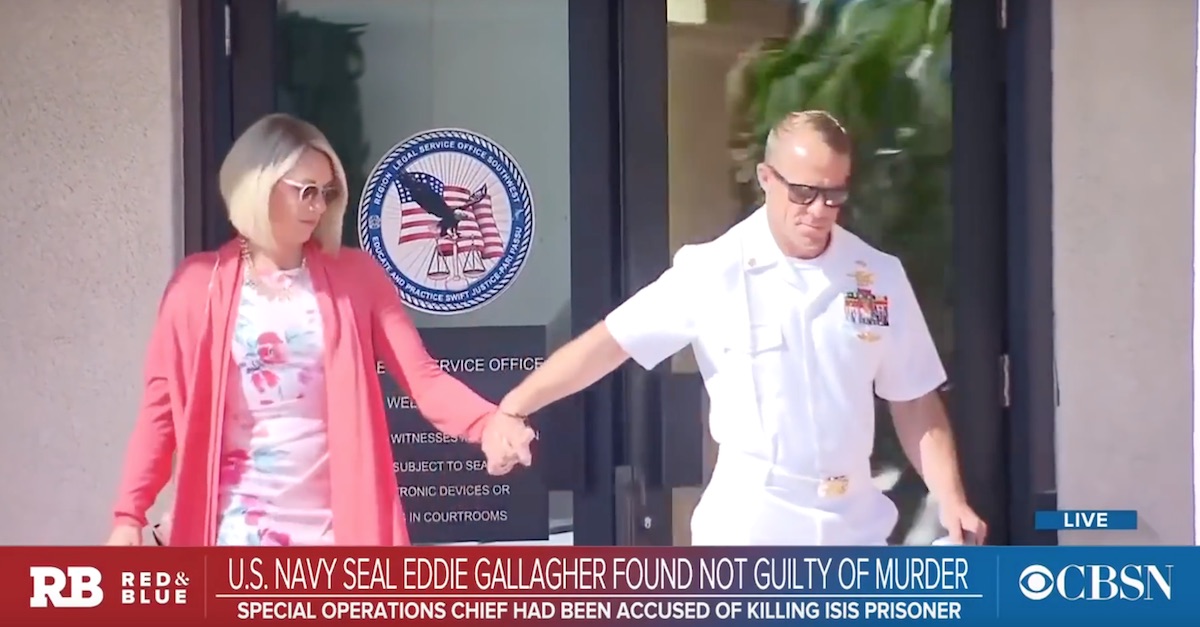 Legal experts were none too pleased with President Donald Trump’s Wednesday decision to order the Navy to rescind medals given to prosecutors who worked the high-profile Eddie Gallagher case.

Lt. Scott McDonald, Lt. Brian John, Lt. George Hageman, and an unnamed attorney whose name was redacted, all received Navy Achievement Medals for their  “superb results” and “expert litigation” in the Gallagher trial.

According to Task & Purpose, Lt. McDonald was praised for “immediately litigat[ing] multiple motions alleging constitutional violations” after taking over as lead prosecutor on the case (Navy Cmdr. Christopher Czaplak had to be removed in June due to spying). Lt. McDonald “brilliantly cross-examined defense witnesses and expertly delivered the government’s case in rebuttal,” a filing said. Lt. John was praised for “preparing the government’s most challenging witnesses” and for displaying “remarkable resiliency” during a difficult trial. Lt. Hageman was praised for his “exceptional pretrial litigation support” and for his “responses to multiple complex defense motions relating to search and seizure issues and potential discovery violations.” The attorney whose named was redacted was a woman. She was credited for her “brilliant legal acumen while providing exceptional pretrial litigation support,” for spending “countless hours” on witness preparation and for her “mastery of discovery.”

In short, these prosecutors were each recognized for the way they handled things in the wake of the Cmdr. Czaplak incident, and for doing their jobs admirably while America watched the case with a keen eye.

President Donald Trump didn’t see it that way, and ordered that these medals be rescinded.

The Prosecutors who lost the case against SEAL Eddie Gallagher (who I released from solitary confinement so he could fight his case properly), were ridiculously given a Navy Achievement Medal. Not only did they lose the case, they had difficulty with respect….

….I am very happy for Eddie Gallagher and his family!

The tweets when combined into a paragraph:

The Prosecutors who lost the case against SEAL Eddie Gallagher (who I released from solitary confinement so he could fight his case properly), were ridiculously given a Navy Achievement Medal. Not only did they lose the case, they had difficulty with respect to information that may have been obtained from opposing lawyers and for giving immunity in a totally incompetent fashion. I have directed the Secretary of the Navy Richard Spencer & Chief of Naval Operations John Richardson to immediately withdraw and rescind the awards I am very happy for Eddie Gallagher and his family!

A couple of things are true: 1) Eddie Gallagher prosecutors did grant immunity to a key witness who actually blew up the murder case against Gallagher; 2) the lead prosecutor on the case had to be removed in June due to spying.

Navy Secretary Richard Spencer ended up doing as the commander-in-chief ordered. Per NPR:

The president was not the only Trump to praise this course of action.

Good… Why the hell would a failed prosecution with obvious flaws merit Medals? That's like giving Mueller & Dems medals for perpetrating their hoax on America… WTF?

“President Donald Trump took a highly extraordinary — and in my view a highly inappropriate — step on Wednesday in ordering the Navy to rescind the achievement medals awarded to military prosecutors in the case against Navy SEAL Eddie Gallagher,” Turley wrote on his blog. “It is hard not to view the President’s intervention as retaliation against prosecutors who took an unpopular case and carried out their duties despite being publicly ridiculed by the Commander in Chief. The move undermines the professionalism and independence of the military justice system.”

“Trump’s public stance on the case was itself problematic since presidents have avoided any such comments or actions on pending prosecutions,” he added. “However, this seems just vindictive and retaliatory against military lawyers who were doing their job.”

Turley was not the only one to see this as retaliatory.

It’s not hard to imagine the effect this public reproof and retaliatory action will have on war crimes prosecutions in the military going forward.

Others said that Trump was sending a “truly horrifying” message to military prosecutors.

The message this sends to military prosecutors considering whether to pursue politically unpopular prosecutions, including for alleged war crimes committed by our servicemembers, is truly horrifying.

Military law has a ban on "unlawful command influence," but this is even worse. https://t.co/PRTtVWg71u

Still others urged Navy Secretary Spencer to resign rather than carry out this order.

Seriously, Spencer and Richardson should resign rather than execute that order. pic.twitter.com/Vh35vJQmrf

Retired Marine colonel David Lapan, for his part, agreed that the order was “ludicrous” and only “further[ed] politicization of the military.”

Gallagher was acquitted in July of all charges except one for posing for a picture with the corpse of a dead ISIS prisoner; prosecutors were reportedly “visibly upset by the turn of events.”

Gallagher had been accused of premeditated murder and attempted murder charges. The court martial stemmed from allegations that in 2017 he stabbed and killed a 17-year-old ISIS militant who was in U.S. custody after being wounded in an air strike. Prosecutors argued that Gallagher texts showed him boasting about this incident and his knife skills.

The most shocking moment of the trial came when SO1 Corey Scott was called to testify for the government. As a primary prosecution witness, it was expected that Scott would corroborate the allegation that Gallagher killed the ISIS militant. Scott, who was granted immunity, testified that Gallagher did stab the ISIS prisoner in the neck, but wasn’t responsible for his death. Scott said he himself put his thumb over the prisoner’s breathing tube, causing him to die.

After the verdict, Trump congratulated the Gallagher family and said he was “glad [he] could help!”

Congratulations to Navy Seal Eddie Gallagher, his wonderful wife Andrea, and his entire family. You have been through much together. Glad I could help!