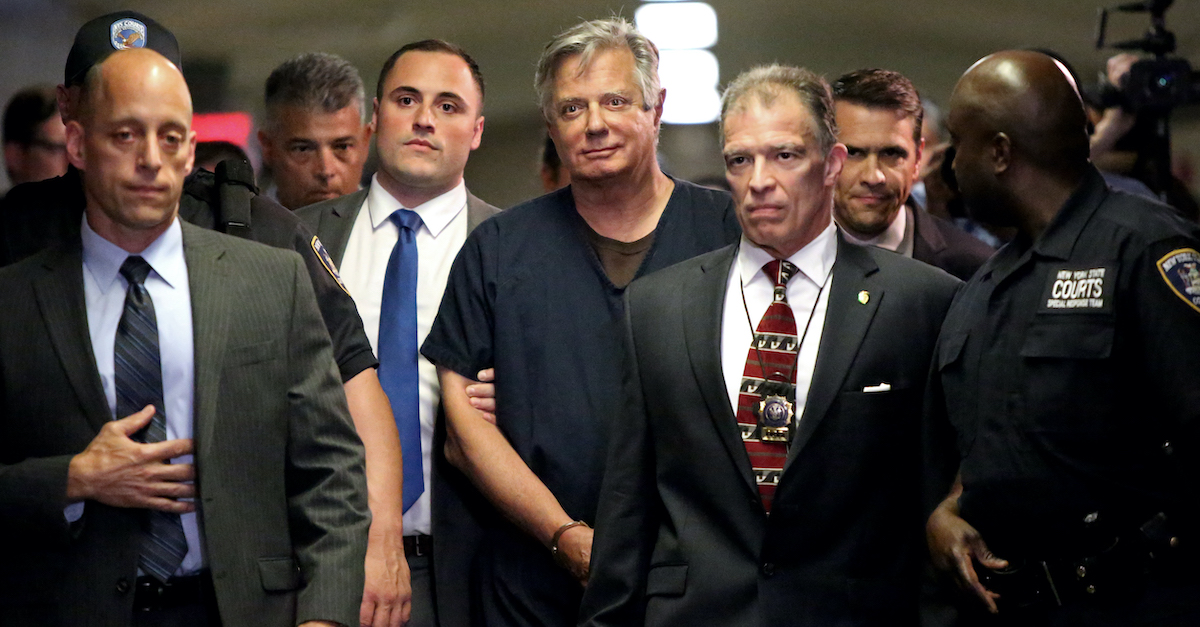 According to a government memo dated Dec. 7, 2018, the first of these lies involved Manafort’s associate Konstantin Kilimnik, whom the Senate Intelligence Committee would later describe as a Russian intelligence operative.

Both the Mueller report and the bipartisan Senate committee found that Manafort and his deputy Rick Gates “periodically” gave Kilimnik the Trump campaign’s internal polling data, even though Gates told the special prosecutor that he suspected that Kilimnik was a Russian “spy.”

According to the Mueller report, Kilimnik had been pursuing a Ukrainian so-called “peace plan” at least four times before and after the 2016 presidential election, and Manafort misled prosecutors about these plans.

“Over the course of several interviews, Manafort lied about the fact and frequency of his discussions with Kilimnik about a Ukraine peace plan,” Mueller’s deputy Andrew Weissmann wrote in December 2018, in a sentence whose conclusion remains redacted.

“The plan involved the creation of an autonomous eastern Ukraine,” the memo states, an outcome that Mueller eventually revealed to be “a ‘backdoor’ way for Russia to control part of eastern Ukraine.”

“Manafort falsely told investigators that after the peace plan was first broached with him on August 2, 2016, by Kilimnik (as [redacted] emissary), he never again spoke about it,” the memo continues. “Manafort said he told Kilimnik the idea was crazy and the discussion ended.”

As reflected in the Mueller report, that was not true.

“In fact, Manafort discussed the plan on several occasions,” Weissmann wrote. “After their meeting on August 2, Manafort and Kilimnik communicated electronically about the plan in December 2016, and then met twice more, once in January 2017 and once in February 2017. In early 2018, Manafort and Kilimnik also worked on drafting a poll of Ukrainians that included several questions focused on the peace plan. The evidence of the above includes electronic communications (including detailed descriptions of the plan), draft polling questionnaires, and travel records. After being told of such evidence, Manafort conceded that he and Kilimnik discussed or may have discussed the peace plan at each meeting.”

Weissmann added that Manafort falsely claimed he did not tell Gates to share the polling data with Kilimnik, but emails and testimony showed that Manafort personally authorized that.

According to the unsealed memo, Manafort claimed after signing his plea agreement that he had “no direct or indirect communication with anyone” in the Trump administration—”on any subject matter.”

On Jan. 7, 2019, Manafort’s lawyers—led by Kevin Downing—chalked up the discrepancies to “mistakes and failed recollections,” rather than lies.

“At his proffer on Sept. 11, 2018, Manafort admitted that he conspired with Kilimnik to obstruct justice by tampering with witnesses, as charged in the superseding indictment returned on June 8, 2018,” Weiland wrote his declaration on the Jan. 14, 2019. “As part of his guilty plea before this Court, Manafort again admitted to conspiring with Kilimnik to obstruct justice to tamper with two witnesses. Subsequently, in an interview on Oct. 16, 2018, after his guilty plea, Manafort denied Kilimnik’s knowing involvement in the conspiracy. That denial was false. ”

Read all five of the unsealed filings below: