And, that’s that. The lawsuit that the Democratic National Committee (DNC) filed alleging a conspiracy between the Russian government, the hacker known as Guccifer 2.0, the Trump Campaign, WikiLeaks and more, to influence the 2016 election has been dismissed with prejudice, meaning it cannot be filed again.

U.S. District Judge John G. Koeltl, a Bill Clinton appointee in the Southern District of New York, had a lot to say, penning an opinion that spanned 81 pages. Here’s what you need to know about this.

1) Russia is “undoubtedly” the “primary wrongdoer,” having “illegally hacked into the DNC’s computers and thereafter disseminated the results of this theft.” Despite this, Russia cannot be sued due to the Foreign Sovereign Immunities Act (FSIA). There was not an exception that applied in this case, thus the proper remedies are “state actions” like sanctions. 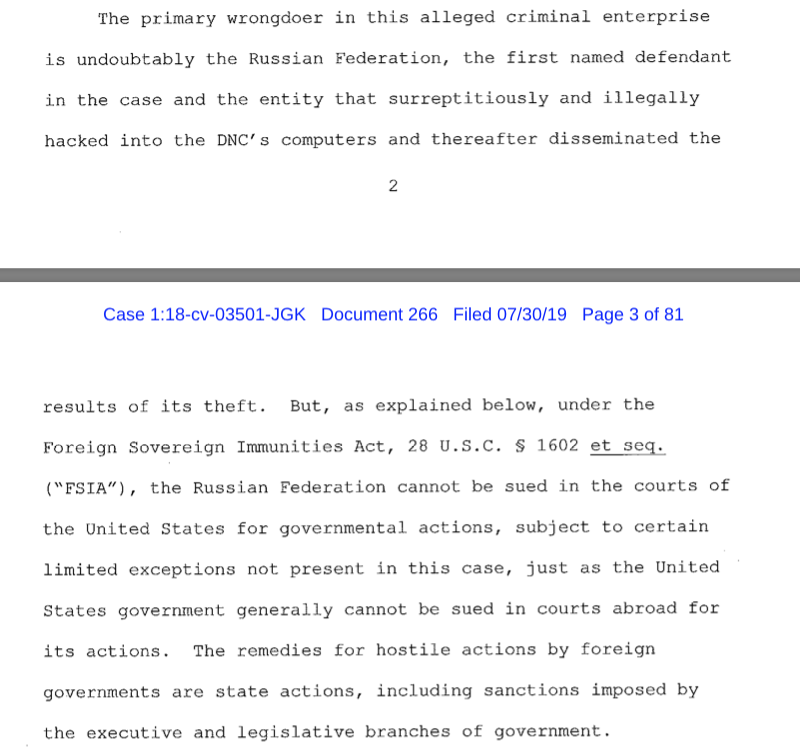 Because FSIA bars this lawsuit against Russia, Koetl ruled, this is not for the courts, but for the “political branches of the Government” to remedy. 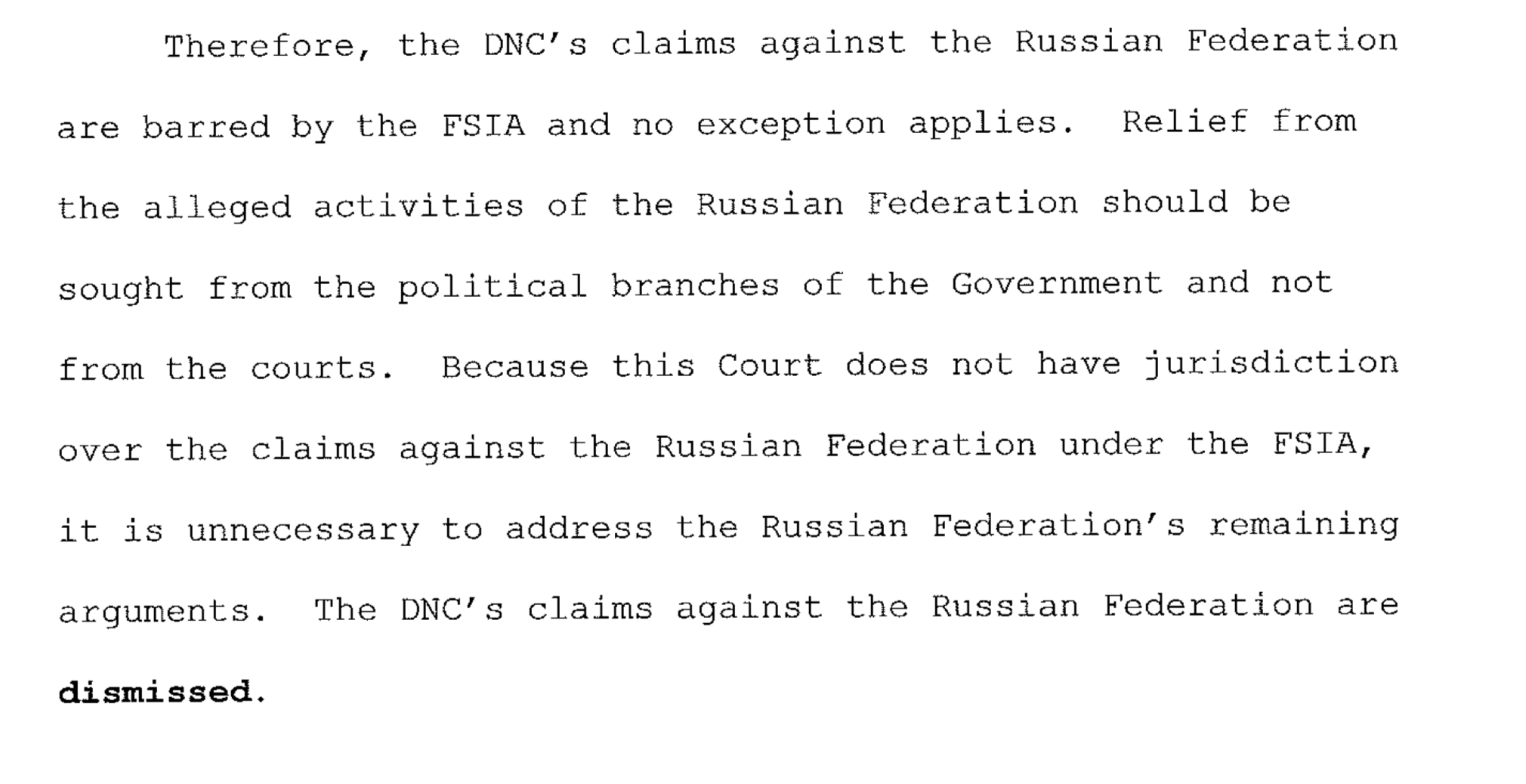 2) The DNC didn’t actually allege that anyone other than Russia “participated in the hack of the DNC’s computers or theft of the DNC’s documents,”  which is crucial because those who published the stolen documents (WikiLeaks) had a First Amendment right to do so. 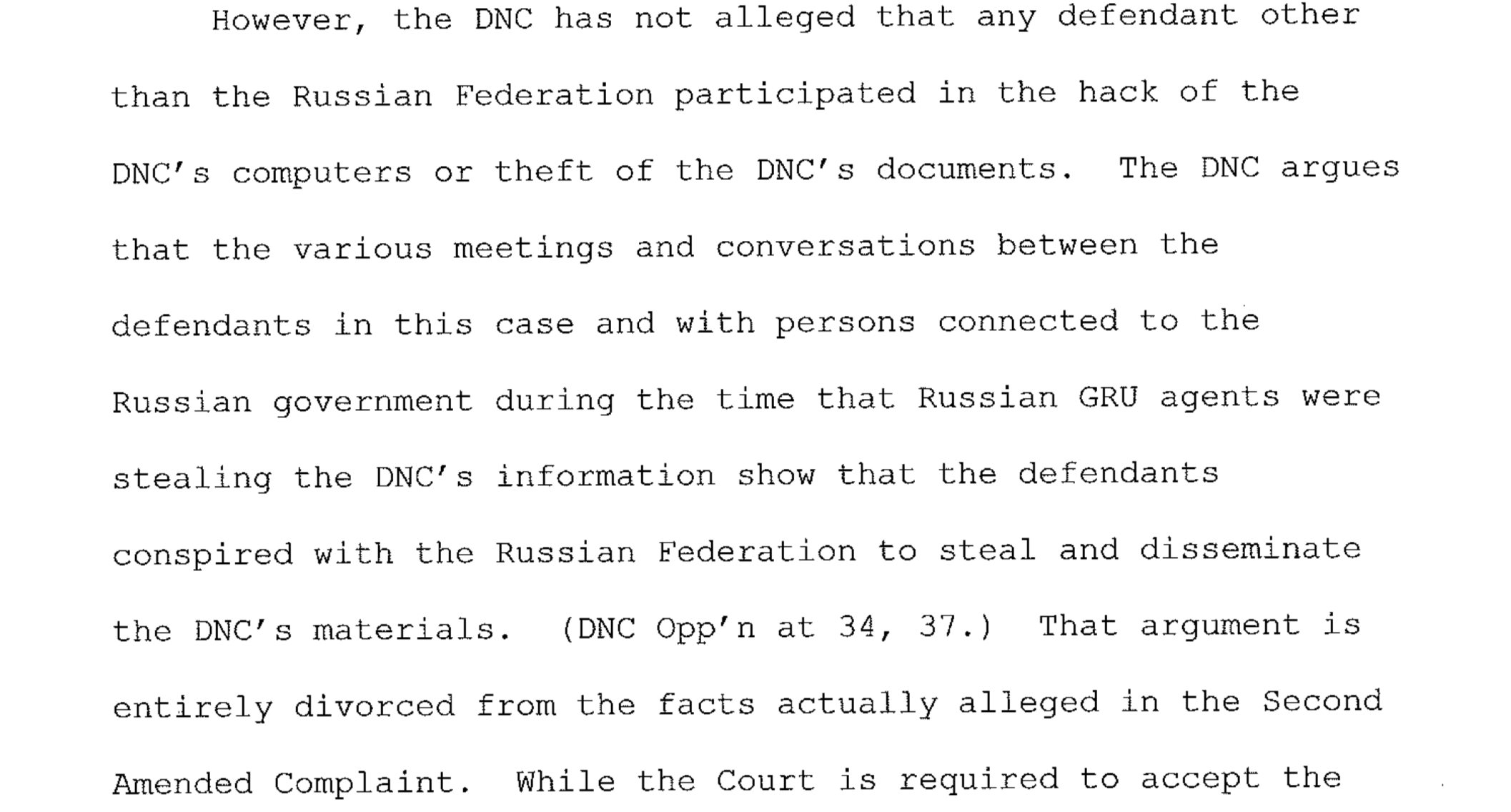 Judge Koeltl said that the DNC argument that WikiLeaks “can be held liable for the [Russian] theft as an after-the fact conspirator” was “unpersuasive” because this would “render any journalist who publishes an article based on stolen information a coconspirator in the theft.” 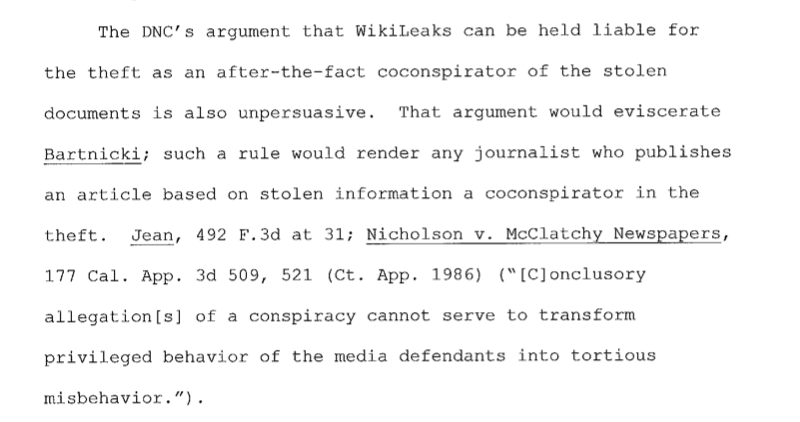 What’s more, the DNC didn’t allege in its second amended complaint (second revision of the original suit) that WikiLeaks “agreed to participate in the theft or that it had any advance knowledge that the Russian Federation was planning to hack the DNC.”

3) What about the Trump Campaign (George Papadopoulos, Donald Trump Jr., Jared Kushner, Paul Manafort, Rick Gates) and Roger Stone, Joseph Mifsud et al.? The “mere opportunity to conspire at legitimate meetings does not support an inference” that a conspiracy occurred. 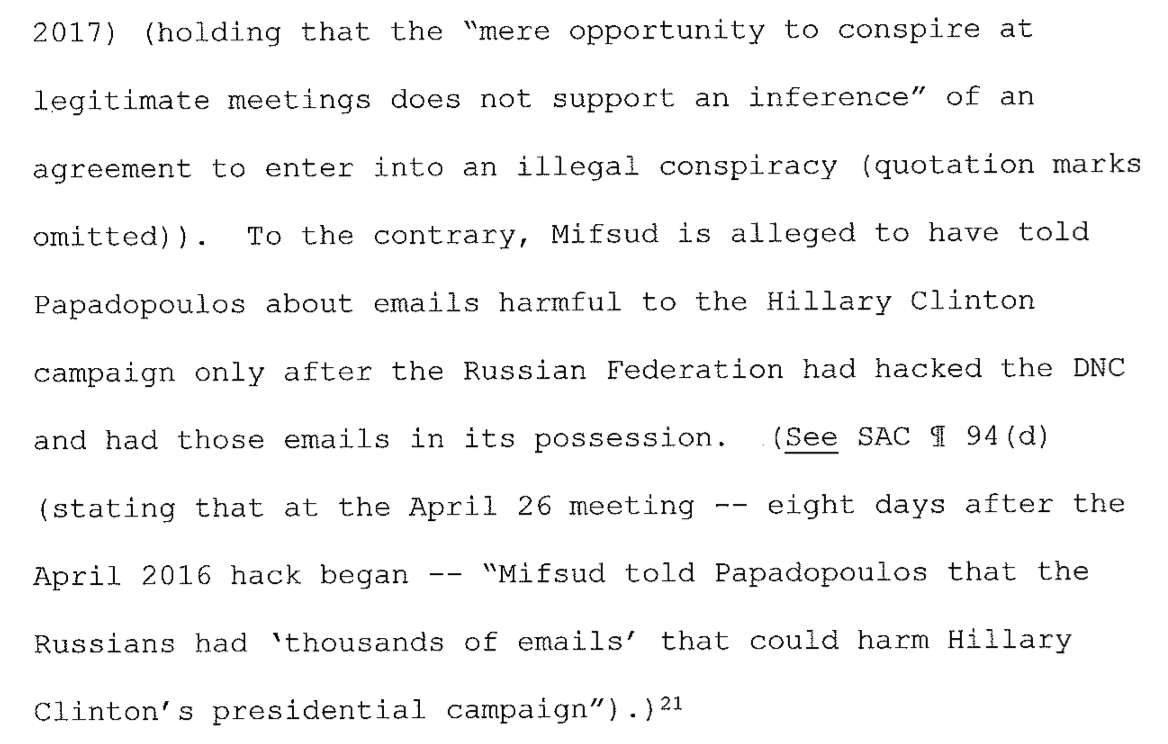 The judge reiterated that the DNC raised a “number of connections and communications between the defendants and with people loosely connected” to Russia, but said that “at no point does the DNC allege any facts in the Second Amended Complaint to show that any of the defendants — other than the Russian Federation — participated in the theft of the DNC’s information.” 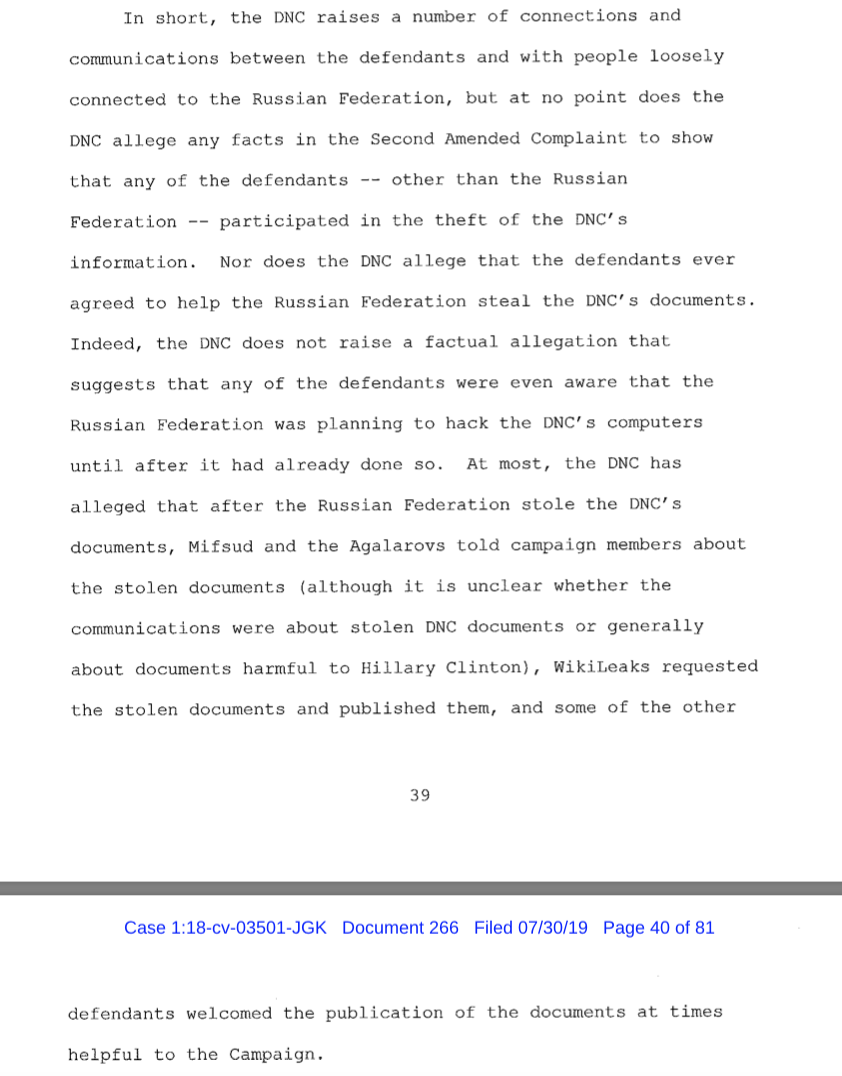 The DNC did not “allege any facts to show any of the defendants” other than Russia had a role in the theft of DNC information. 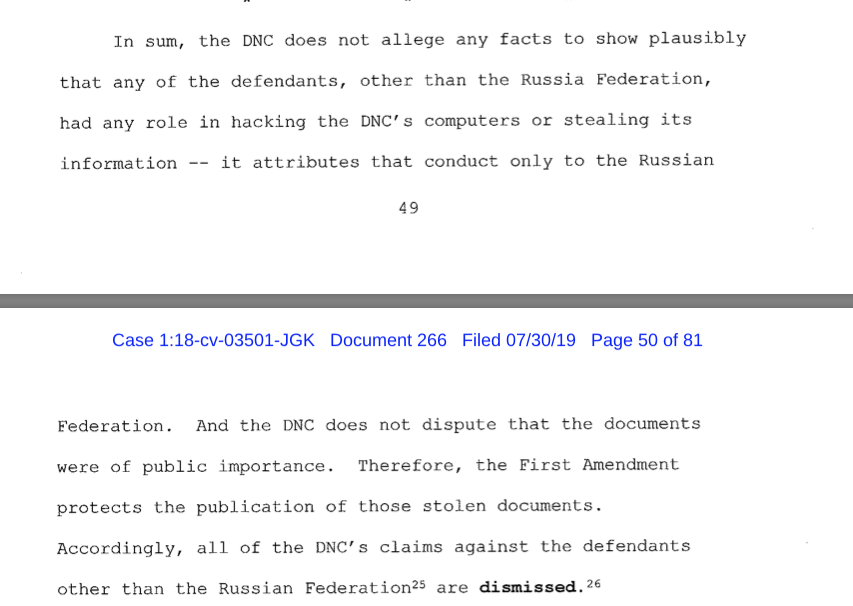 Then there was the racketeering (RICO) allegation in connection with the theft of the DNC’s information. While the DNC alleged that the Trump Campaign and an association-in-fact (AIF) enterprise unlawfully coordinated to do so, the judge said that DNC “failed to allege adequately the existence of an AIF enterprise.”

The features an AIF enterprise structure “must have” include a “purpose,” and Judge Koeltl said the DNC did not “plausibly” allege a “common purpose or sufficient relationships to assert an AIF enterprise.” 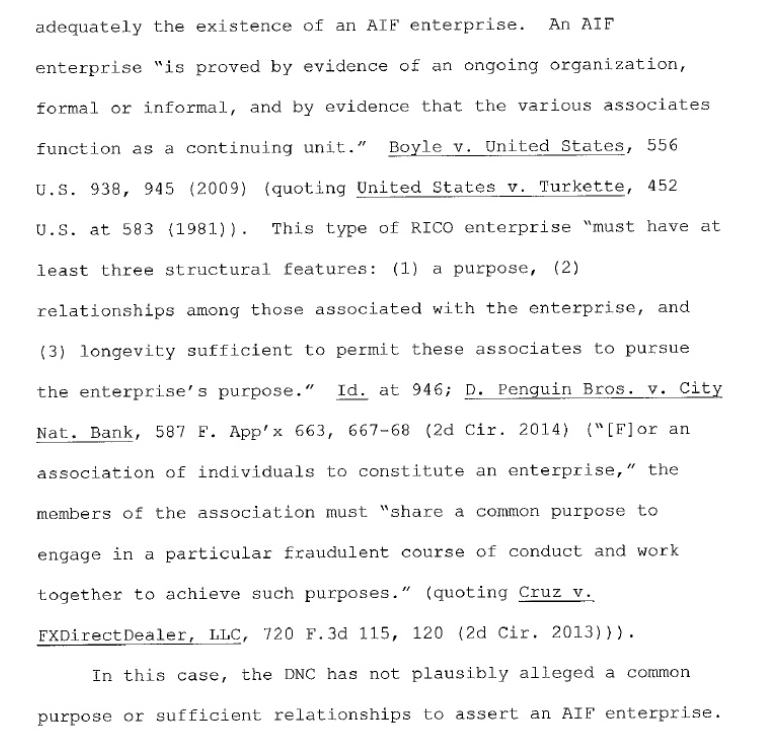 The judge said that the “asserted AIF members are alleged to have been pursuing various goals independent of one another”: Russia committed crimes to undermine the election and sabotage Hillary Clinton; WikiLeaks “had an axe to grind with Hillary Clinton” and published the information; the Trump Campaign wanted to get Trump elected.

“There is no indication that there was any structure or hierarchy to this group,” Judge Koeltl wrote. 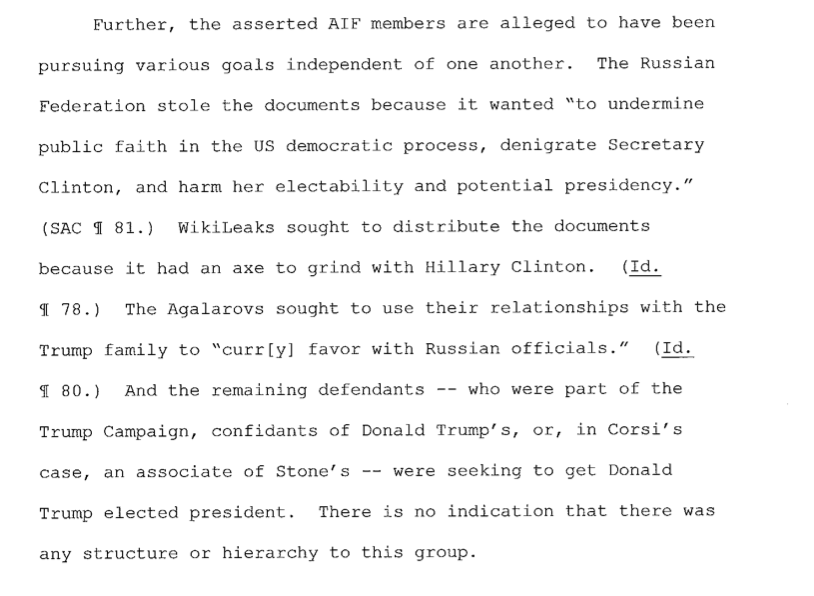 The judge, at one point, also said the DNC made allegations in “conclusory fashion that various individuals and entities have committed acts to further the scheme despite not having any apparent connection to most of the other defendants.”

Conclusory means: “Consisting of or relating to a conclusion or assertion for which no supporting evidence is offered [allegations].”

“A plaintiff may not simply ‘string[] together … various defendants and label[] them an enterprise,'” the judge continued. “That is what the DNC attempts to do here. Therefore, the DNC has failed to allege the existence of an AIF enterprise.”

4) All of that being said, the judge would not permit the DNC to be slapped with sanctions. The Trump Campaign’s motion to sanction the DNC for continuing to pursue this lawsuit–even after the release of Special Counsel Robert Mueller’s Russia Report (which did not allege a grand conspiracy)–was also dismissed. 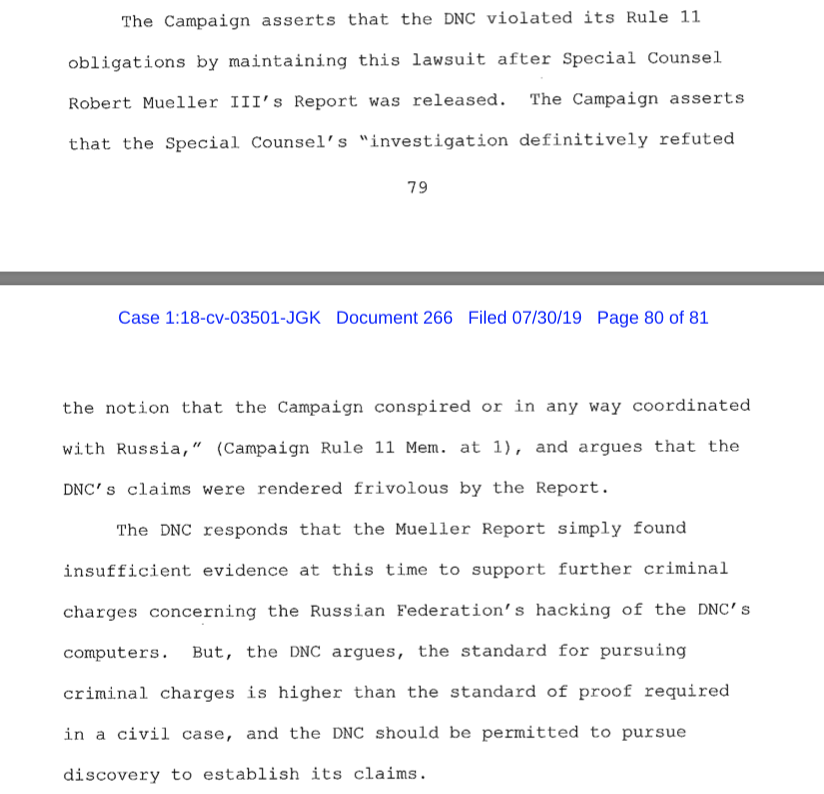 Judge Koeltl ruled that the DNC’s second amended complaint was “not ‘so objectively unreasonable as to warrant the imposition of sanctions,’ even though the Court has concluded that all of the claims must be dismissed for the reasons explained above.” 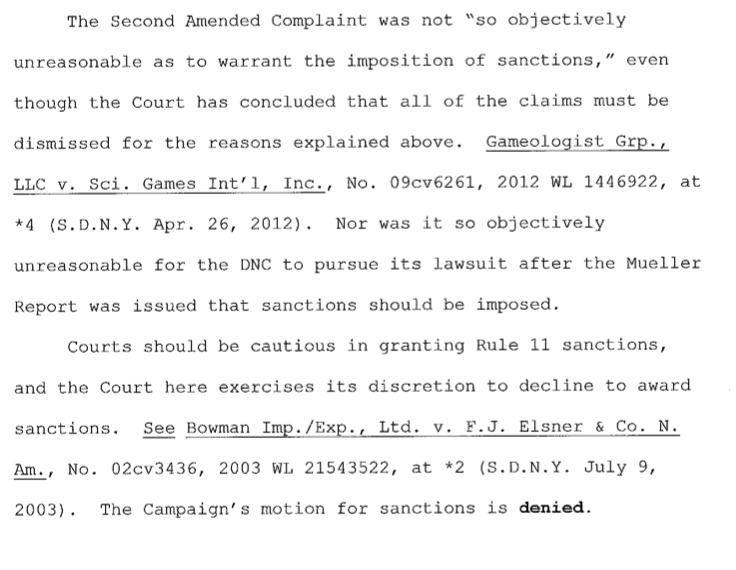 In his conclusion, the judge dismissed the DNC complaint with prejudice, denied the Trump Campaign’s motion to sanction the DNC and directed the court clerk to “close this case and to close all pending motions.”