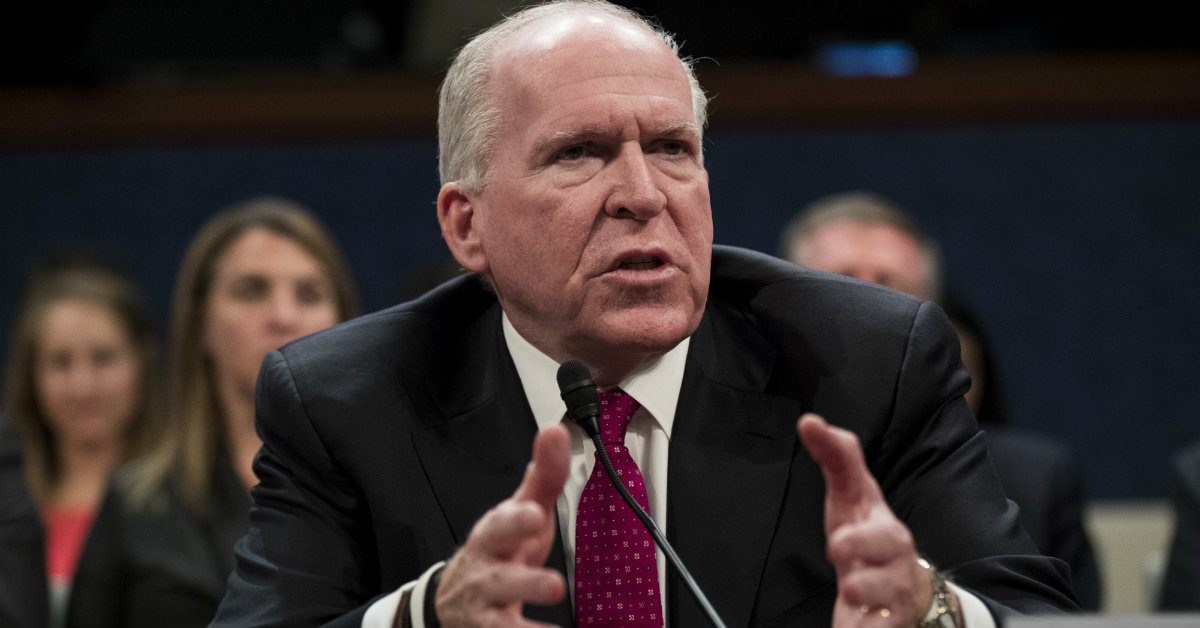 Former CIA Director John Brennan sat down for an eight-hour interview with U.S. Attorney John Durham on Friday as part of the latter’s probe into the origins of the Russia investigation. During the lengthy interview, Durham told Brennan that he was “not a subject or a target” of the investigation but a “witness” to events being reviewed by investigators, Brennan adviser Nick Shapiro wrote in a summary of the encounter on Twitter.

Brennan was informed by Mr. Durham that he is not a subject or a target of a criminal investigation and that he is only a witness to events that are under review. The interview was conducted at CIA headquarters and lasted eight hours. 2/8

“Brennan welcomed the opportunity to answer Mr. Durham’s questions related to a wide range of intelligence-related activities undertaken by CIA before the November 2016 presidential election as well as the Intelligence Community Assessment (ICA) published in early Jan 2017,” Shapiro, Brennan’s former deputy chief of staff, wrote. “Brennan provided details on the efforts made by the Intelligence Community to understand and disrupt the actions taken by Russia to interfere in the 2016 presidential election.”

Brennan provided details on the efforts made by the Intelligence Community to understand and disrupt the actions taken by Russia to interfere in the 2016 presidential election. 4/8

U.S. Attorney General Bill Barr in June 2019 hand-picked Durham to oversee an administrative review of the FBI’s “Crossfire Hurricane” investigation into Trump’s 2016 presidential campaign. By Oct. 2019, it was confirmed that the investigation would also be looking into possible criminal conduct and include actions taken under former special counsel Robert Mueller’s Russia probe.

Last year, Durham requested copies of Brennan’s emails, call logs, and several other documents from Brennan’s tenure at the CIA.

Brennan, who served under President Barack Obama, also pushed back on Durham, suggesting that his investigation was politically motivated, particularly in light of Mueller and the Senate Intelligence Committee both corroborating the CIA’s findings regarding Russia’s systematic interference in the 2016 election.

“Brennan also told Durham that the repeated efforts of Donald Trump & William Barr to politicize Mr. Durham’s work have been appalling & have tarnished the independence & integrity of the Department of Justice, making it difficult for DOJ professionals to carry out their job,” Shapiro wrote. “It is Brennan’s fervent hope that the results of the Durham review will be apolitical and not influenced by personal or partisan agendas.”

It is Brennan's fervent hope that the results of the Durham review will be apolitical and not influenced by personal or partisan agendas. 8/8

Barr, who has long expressed disdain at the notion that U.S. intelligence agencies “spied” on a presidential campaign, has been publicly pressured by President Trump to use the Durham investigation to prosecute his political enemies.

As previously reported by Law&Crime, Trump has repeatedly declared that the probe will vindicate his claims that the Obama administration illegally spied on his campaign. The president went so far as to say Barr’s legacy was entirely dependent upon whether top Obama administration officials were charged—not just lower-level people.

“Bill Barr can go down as the greatest attorney general in the history of our country, or he can go down as an average guy. It depends on what’s going to happen,” the president said, immediately after calling out Brennan, former FBI Director James Comey, and former DNI James Clapper by name. “Bill Barr and Durham have a chance to be — Bill Barr is great most of the time, but if he wants to be politically correct, he’ll be just another guy.”

The first substantive result of the year-long probe came last week, when former FBI attorney Kevin Clinesmith pleaded guilty to a felony charge for altering an email that was used in a Foreign Intelligence Surveillance Act (FISA) warrant application.