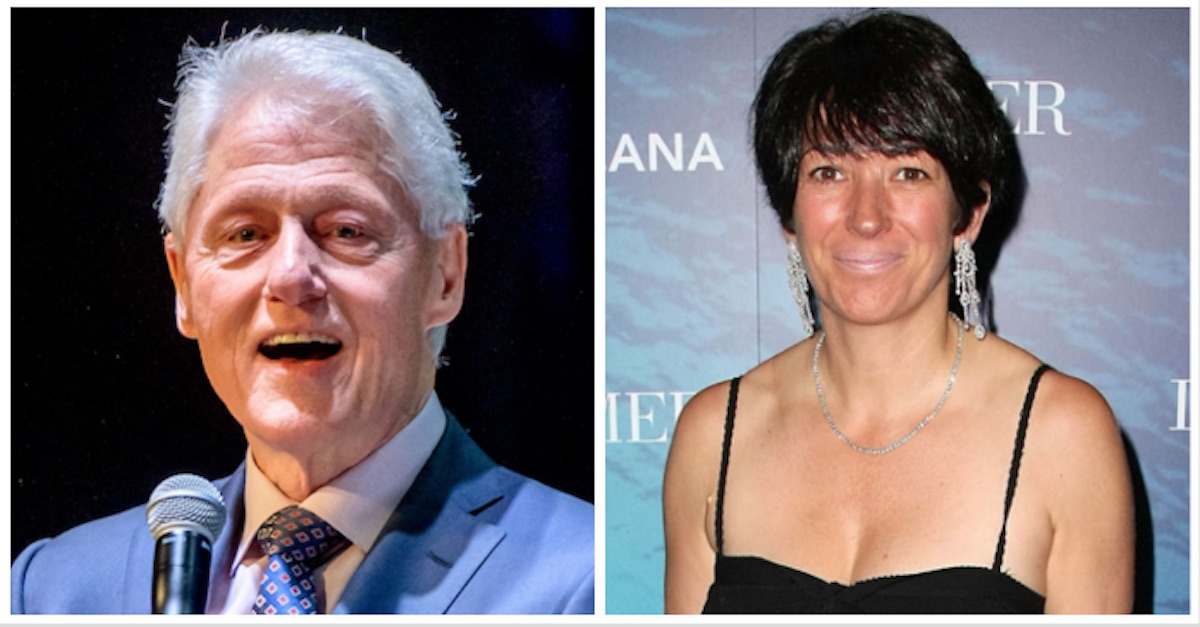 Convicted pedophile Jeffrey Epstein’s friend, former partner and alleged madam, Ghislaine Maxwell, was reportedly “very close” to Bill Clinton, who recently went on the record through a spokesman to say he “knows nothing” about Epstein’s crimes.

A Politico report from Sunday about the Maxwell-Clinton connection cited a number of anonymous individuals. One of those said to be familiar with the situation claimed that the British socialite Maxwell was not only “incredibly close” to Chelsea Clinton, but also “had her own relationship with Bill Clinton and was very close to him”:

Maxwell first grew close with the Clintons after Bill Clinton left office, vacationing on a yacht with Chelsea Clinton in 2009, attending her wedding in 2010, and participating in the Clinton Global Initiative as recently as 2013, years after her name first emerged in accounts of Epstein’s alleged sexual abuse.

Bill Clinton has admitted only to taking four trips on Epstein’s plane–dubbed the “Lolita Express”– in 2002 and 2003, saying he was surrounded by a secret service detail the entire time. He also said that his meetings with Epstein were brief and infrequent. 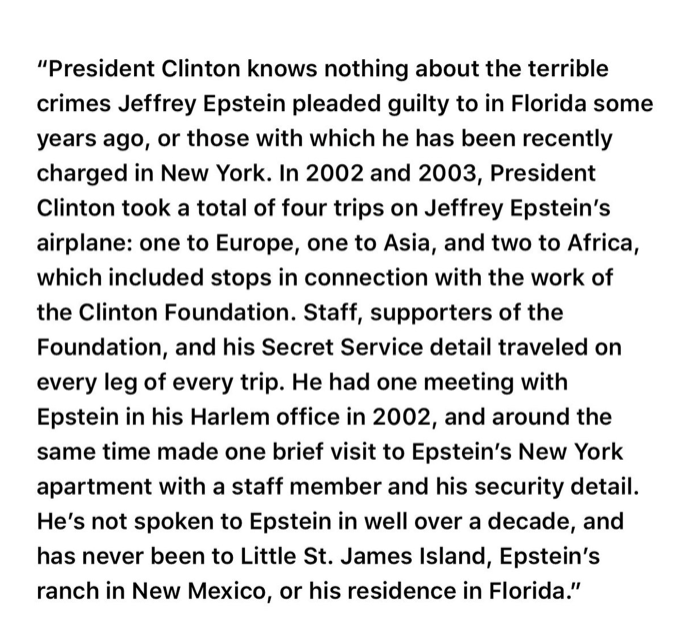 Although Clinton’s press secretary Angel Ureña said in the statement that Clinton “knows nothing about the terrible crimes Jeffrey Epstein pleaded guilty to in Florida some years ago, or with those which he has been recently charged in New York,” an investigative journalist said that Clinton was not telling the truth about Epstein.

“I know from the pilot logs and these are pilot logs that you know were written by different pilots and at different times that Clinton went, he was a guest of Epstein’s 27 times,” Conchita Sarnoff said. “[M]any of those times Clinton had his Secret Service with him and many times he did not.”

“Almost every time that Clinton’s name is on the flight logs, there are underage girls there. There are initials and there are names of many, many girls on that private plane,” she added.

Interestingly, much of the Politico story otherwise focused on Maxwell-Chelsea Clinton encounters that took place in 2009 and thereafter. 2009 was after Epstein did 13 months in county jail for soliciting prostitution from a minor, as part of a sweetheart deal that took federal charges off the table and immunized his co-conspirators from prosecution. While Epstein could have gone to prison for life for sexually abusing dozens of young girls, he was instead afforded extraordinary work release privileges that he allegedly abused.

In the ensuing years, Maxwell reportedly connected with Chelsea Clinton and Clinton’s husband Marc Mezvinsky through Ted Waitt, a billionaire to whom Maxwell was “romantically linked.”

Two people familiar with the relationship between Maxwell and the Clintons said Maxwell, Clinton and Mezvinsky flew together on a private plane to rendezvous with Waitt for a trip on Waitt’s yacht. One of those people said the trip took place in 2009.

Waitt, whose philanthropic endeavors focus on the world’s oceans, has given somewhere between $10 million and $25 million to the Clinton Foundation. Waitt’s philanthropic foundation did not respond to a request for comment.

In 2010, Maxwell went to Chelsea Clinton’s wedding. There is an image of this that has circulated online. Maxwell was reportedly Waitt’s date at the wedding.

But a Clinton spokesperson disputed that Maxwell and Chelsea Clinton were really close. Her chief of staff also released a statement saying that they did not know about the allegations against Maxwell until 2015.

“It wasn’t until 2015 that Chelsea and [her husband] Marc became aware of the horrific allegations against Ghislaine Maxwell and hope that all the victims find justice. Chelsea and Marc were friendly with her because of her relationship with a dear friend of theirs. When that relationship ended, Chelsea and Marc’s friendship with her ended as well,” Bari Lurie said.

In 2015,  Virginia Roberts (now Giuffre)  accused Maxwell of helping Epstein solicit minors for him and his guests to sexually abuse. A second lawsuit appeared last December this time from an adult woman named Sarah Ransome, who claimed Maxwell and Epstein coerced her into sex. Ransome was in her twenties at the time of the alleged assault. This suit was settled. A third lawsuit appeared this past April, this time from a woman named Maria Farmer. She came forward with a sworn affidavit that Epstein sexually assaulted her in the 1990s and that Maxwell molested her 15-year-old sister.

Additionally, court documents from the Giuffre case were ordered released by the United States Court of Appeals. That case was reportedly settled for millions of dollars. These documents may shed additional light on Maxwell’s involvement with Epstein’s alleged activities, plus allegations involving rich and powerful men.

Allegations were made against Maxwell earlier than 2015:

Juan Alessi, who said in one of the depositions that he served as the Palm Beach house manager from around 1992 through 2002, described a basket of sex toys in Ms. Maxwell’s bathroom closet. He said he would find them around when he cleaned up after visits from the young women.

Maxwell was not charged more than a decade ago, and she hasn’t been charged in relation to the child sex-trafficking charges most recently leveled against Epstein in the Southern District of New York. She has vehemently denied allegations that she was involved in a child sex trafficking ring.

Morning Joe dug up footage of Trump partying with Jeffrey Epstein at Mar-a-Lago in 1992 pic.twitter.com/3T4l2enrqc