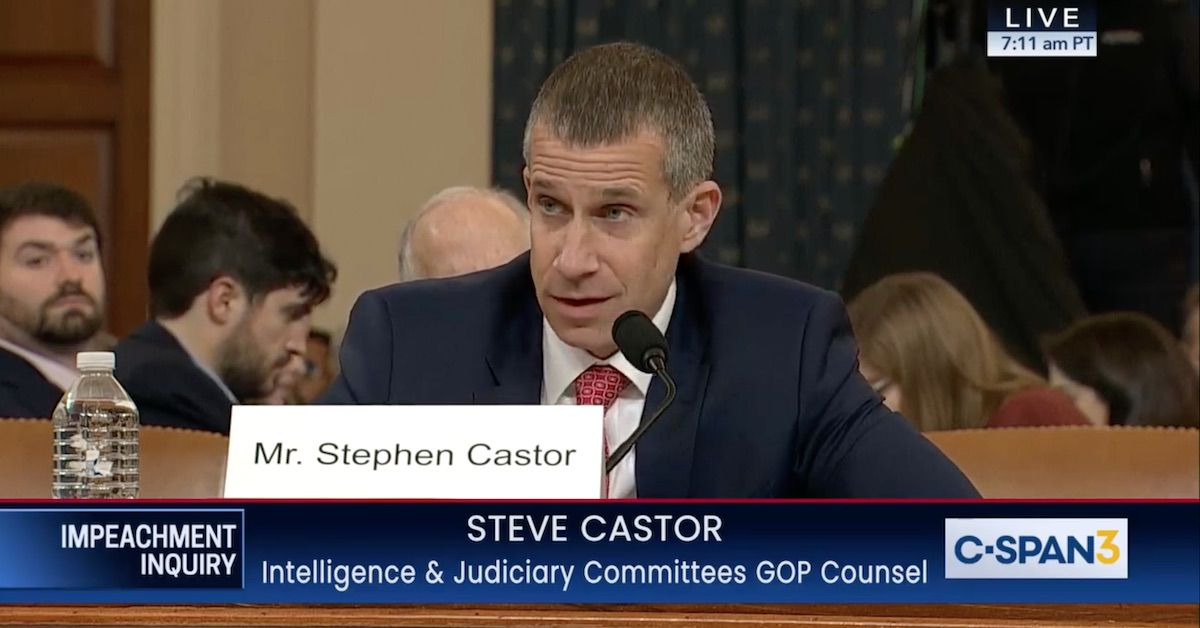 Steve Castor, who you may remember from the House Intelligence Committee phase of the impeachment inquiry, appeared before the House Judiciary Committee on Monday to present the case as to why the president should not be impeached. Castor argued during his opening statement that it would be “baloney” to impeach President Donald Trump over “eight lines” in the non-verbatim memo of Trump’s infamous July 25 phone call with Ukrainian President Volodymyr Zelensky.

It was an argument immediately called out as a combination of “straw man” and a “red herring.”

Castor: "To impeach a president who 63 million people voted for over 8 lines in a call transcript is baloney."

This is a straw man and a red herring all rolled into one. It isn't just about the transcript, much less 8 lines of it.

"To impeach a president who 63 million people voted for over eight lines in a call transcript is baloney."

Castor said that rather than violating his oath of office, President Trump took care to faithfully execute the laws. He echoed George Washington University Law Professor Jonathan Turley’s criticism of Democrats, about undertaking a so-called “rushed impeachment.” (Turley was one of four constitutional law experts who testified last week, and the only expert called by Republicans. The other three, called by Democrats, all said it was clear Trump committed impeachable offenses.)

“The artificial and arbitrary political deadline by which Democrats are determined to finish impeachment by Christmas leads to a rushed process and missed opportunities to obtain relevant information,” Castor said.

Castor went on to make some arguments that raised the eyebrows of numerous observers.

“Democrats didn’t even try to hold witness who defied subpoenas in contempt.”

So, Steve Castor just suggested holding recalcitrant Administration witnesses in contempt… This is their defense of @realDonaldTrump?

The implications of discrediting Michael Cohen, the president’s now-incarcerated former longtime attorney and fixer… while the president’s current personal attorney, Rudy Giuliani, is at the center of the impeachment inquiry.

Castor tries to dismiss Michael Cohen's testimony by calling him a "disgraced felon."

Yeah, wow. Imagine who would ever use that guy as their personal attorney and fixer.

Steve Castor's attack on Michael Cohen's credibility offers an exciting concept for the GOP defense of the president: "You can't trust any of these witnesses, they worked for Donald Trump, obviously they are criminals."

Minority counsel Steve Castor dismisses Michael Cohen as "a disgraced felon." He was Pres. Trump's attorney for more than a decade. pic.twitter.com/3sQHcVwaKG

The Mueller investigation was too long, and this one is too short.

Castor bashes Mueller investigation as too long and too expensive. Now he's saying this process has been too short and too narrow…

Castor focused on the “process” and Democrats, not the substance of the allegations against the president.

"This unfair process reflects the degree to which Democrats are obsessed with impeaching the president."

In a nutshell, the defense in the impeachment of the 45th POTUS:

Dems don't like POTUS are doing this for political reasons. Even though polling shows it's NOT good politics for them.

Castor, the GOP attorney, is ….. not even trying to dispute the facts Berke laid out.

This is what Dems are taking from Castor's opening: It's a lengthy indictment of Democrats' purported motives but makes no effort to defend Trump on the substance of the Ukraine allegations >>> https://t.co/bSHvMkYBET

Lying about a “key point”? We know the Ukrainians knew military aid was withheld before it was publicly reported for the first time.

Looks like Castor did not tell the truth on a key point. #ImpeachmentHearings https://t.co/UzJHdvUGko

Paging Mr. Castor! You're telling the American people something that is not true! Surely, you don't want to do that. Zelenskiy felt pressure early on and U.S. officials knew that. Also, we have common sense. Of course, he felt pressure, but would not say that publicly. https://t.co/vhVt60pxhj

How strange that Castor repeats the argument that the Ukrainians didn’t know the aid was withheld until late August, when we have documents and testimony dating it to July 25 if not earlier.