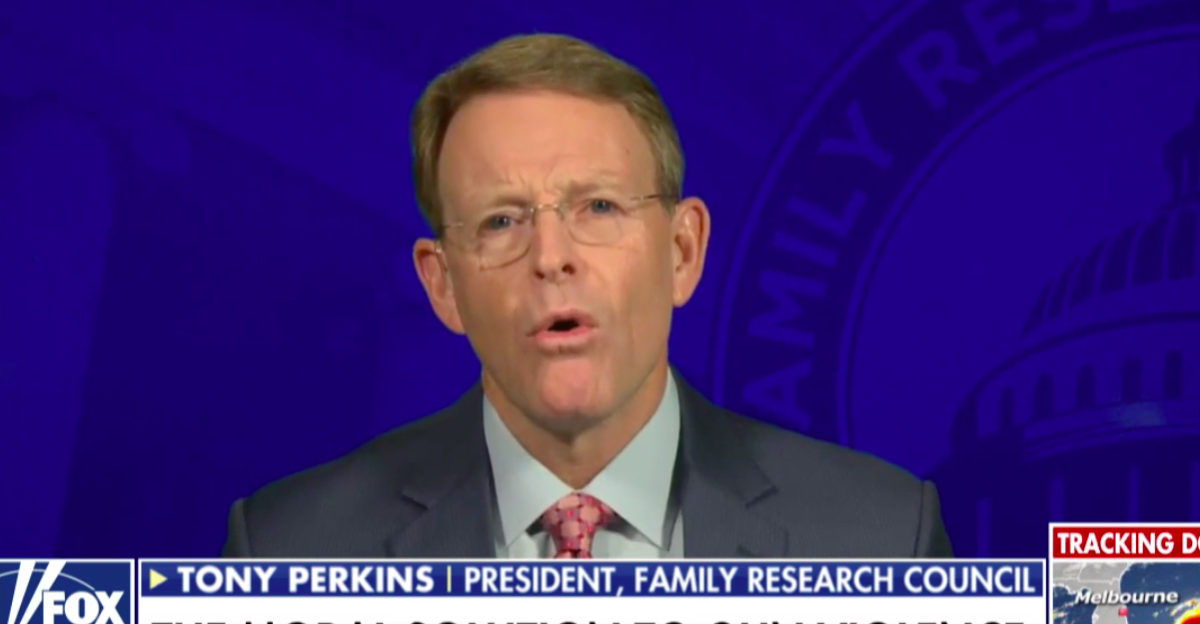 A Fox News guest on Sunday blamed the recent slew of mass shootings on the absence of religion from the America’s public discourse, specifically mentioning children being taught the theory of evolution as contributing to the epidemic of gun violence.

Tony Perkins, a former police officer and the president of the Family Research Council, a Christian conservative policy and lobbying organization, appeared on Fox & Friends to discuss the Saturday mass shooting in Odessa, Texas, where a 36-year-old man with an AR-15-style rifle went on a shooting spree that left at least seven people dead and more than 21 people injured.

Perkins began the segment by calling the shooting “tragic,” saying the genesis of problem was not one that could be ameliorated through increased gun control legislation.

“It’s tragic and at some point we have to realize we have a problem as a nation, and the problem is not the absence of laws, it’s an absence of morality – really, the result of a decades-long march through the institutions of America, driving religion and God from the public square,” Perkins said.

When asked what the nation could do to prevent future tragedies of this nature from continuing to occur, Perkins’ response initially struck a bipartisan tone, stating his willingness to discuss solutions with those who disagree with his opinions.

“As an ardent supporter of the Second Amendment, I’m willing to sit down with the left who say, ‘I don’t want to hear any more about your prayers.’ Well, I agree. Praying alone is not enough, it’s time to act. It’s not just about having a conversation about restricting those who should not have guns — criminals — but it’s also a discussion of the absence of a moral core in our culture today,” he said.

Perkins then espoused the notion that teaching evolution to children somehow engenders immoral conduct, a phenomenon he blamed squarely on the political Left.

“I mean look, we’ve taught our kids that they come about by chance through primordial slime and we’re surprised that they treat their fellow Americans like dirt,” Perkins said. “It’s time we talk about the result of the Left’s systematic march through our institutions, driving religious expression from the public square.”

“I think we have to go back to the point where we instill in these children, at least give them the opportunity to know that they’re created in the image of God, therefore they have inherent value,” Perkins continued.

Perkins was then joined on the panel by a second religious leader, Pastor Corey Brooks of the non-denominational New Beginning Church, who reiterated Perkins’ belief that the root of gun violence can be traced back to God being cast out of the public discourse.

“The fact that morality is at a very low in America right now, we have to do everything we can to make sure that we turn America back toward God. It’s unfortunate that in so many institutions God has been forced out of the equation,” he said.