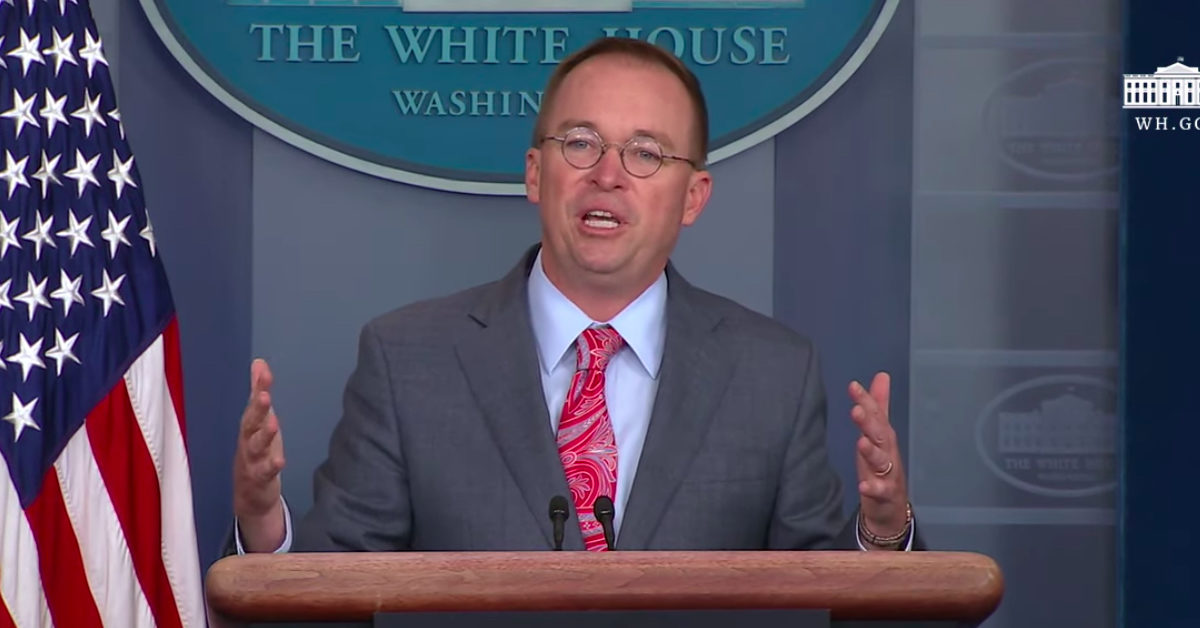 In a surprise press briefing Thursday, acting White House chief of staff Mick Mulvaney demolished the GOP’s most prominent rebuttal to the Ukraine scandal by admitting that President Donald Trump withheld congressionally-approved military aid to Ukraine because the country wasn’t investigating the debunked conspiracy theory that Ukraine, not Russia, interfered in the 2016 presidential election.

After weeks of Republicans warding off attacks by repeating the phrase “no quid pro quo,” the President’s acting chief of staff conceded exactly the opposite – an unforced error that left legal experts dumbstruck and the GOP in search of a new talking point.

While answering a question from Jonathan Karl of ABC News about why the Ukraine aid was withheld, Mulvaney said, “Did [President Trump] also mention to me in the past the corruption that related to the DNC server? Absolutely. No question about that. But that’s it, and that’s why we hung up the money.”

“So the demand for an investigation into the Democrats was part of the reason that he ordered to withhold funding from Ukraine?” Karl followed-up.

“The look back to what happened in 2016, certainly, was part of the things that he was worried about in corruption with that nation, and that is absolutely appropriate,” Mulvaney responded, seemingly unaware that he had just torched the White House’s oft-echoed defense. “We do it all the time with foreign policy.”

Mulvaney’s statements caused an uproar among legal analysts, with many agreeing that Mulvaney statement could have serious repercussions.

“This is the textbook definition of an impeachable offense, and the White House Chief of Staff has just admitted it,” he remarked.

Joyce White Vance, a former federal prosecutor and current law professor at the University of Alabama, offered a similar take on the administration’s admission.

“The highest standard for what impeachable act could mean is requiring the commission of an actual crime,” Vance wrote. “Clearly, the Constitution contemplates other misconduct, but there’s no longer a need to debate what that might be as what we have is an admission of criminal conduct.”

Attorney and fellow at the Brookings Institute Scott R. Anderson explained why Mulvaney’s explanation isn’t likely to be helpful.

“The problem with the ‘we do it all the time’ logic is that all the wheeling and dealing of diplomacy is normally meant to advance U.S. national interests, not the President’s personal political interests,” he wrote. “And that’s what makes this impeachable conduct.”

Following the briefing, a Senior DOJ official distanced the department from Mulvaney’s claims.

“If the White House was withholding aid in regards to the cooperation of any investigation at the Department of Justice, that is news to us,” that official reportedly said.

The president’s personal attorney Jay Sekulow also distanced the legal team from Mulvaney’s remarks, telling CNN, “The legal team was not involved in the Acting Chief of Staff’s press briefing.”

The DOJ notably declined to pursue a criminal referral about a potential campaign finance violation, which followed the Ukraine whistleblower complaint.