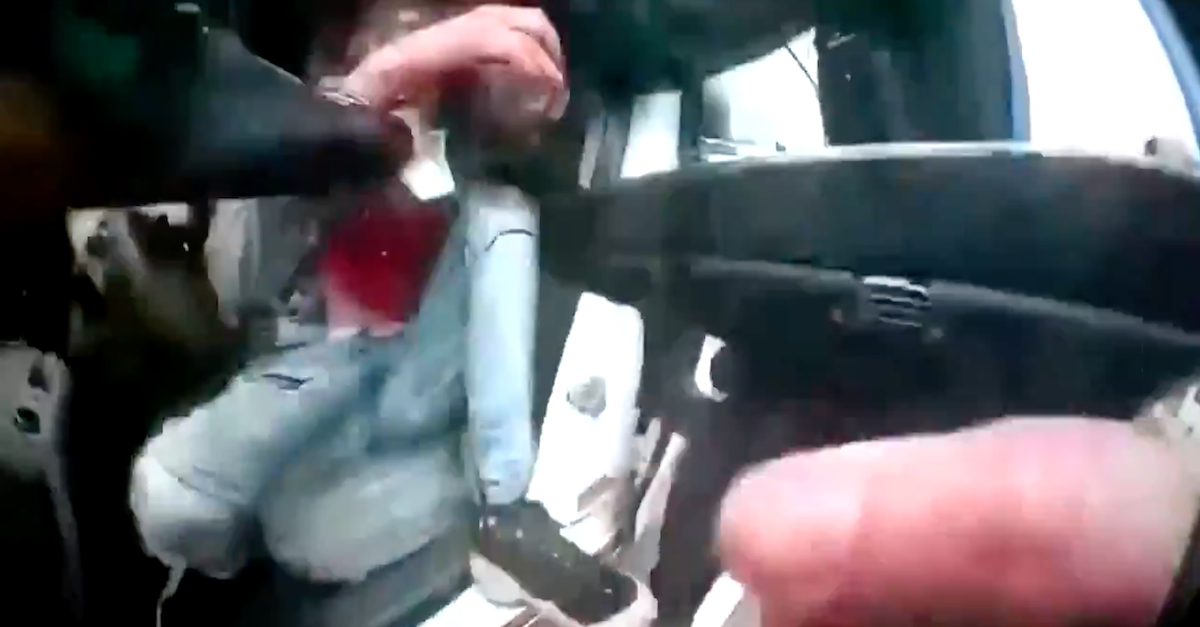 Former Brooklyn Center, Minn. Police Officer Kim Potter is in the process of being charged Wednesday with second-degree manslaughter in the shooting death of Daunte Wright, 20. That’s according to law enforcement sources first cited by Minneapolis ABC affiliate KSTP-TV and later reporting by NBC News which confirmed the charge with Washington County, Minn. Attorney Pete Orput.

Minnesota Public Radio tweeted its own confirmation via Orput which said the prosecutor “has forwarded” the charges “to be filed” — suggesting they were imminent but not yet on the actual court docket.

NOW: Washington County Attorney Pete Orput just told me he has forwarded 2nd degree manslaughter charges to be filed against the officer that shot and killed Daunte Wright on Sunday. They will be formally filed in Hennepin County shortly. @mprnews

The charge does not officially appear on an electronic court docket reviewed by Law&Crime as of the time of this writing.

The Washington County Attorney’s Office reportedly handled the charging decision to avoid any possible conflicts of interest.  The shooting occurred in nearby Hennepin County.

Potter and the former Brooklyn Center Chief of Police resigned over the incident.

Since-resigned Brooklyn Center Police Chief Tim Gannon said he believed Potter made a mistake when she fired her service weapon, rather than her taser, in the heat of a scuffle which lasted but a few seconds. Potter’s body camera footage shows Potter threatening to pull the trigger for a few split seconds before the gunshot rang out.

The only relevant section of Minnesota’s second-degree manslaughter statute reads as follows:

A person who causes the death of another by any of the following means is guilty of manslaughter in the second degree and may be sentenced to imprisonment for not more than ten years or to payment of a fine of not more than $20,000, or both:

(1) by the person’s culpable negligence whereby the person creates an unreasonable risk, and consciously takes chances of causing death or great bodily harm to another.

The Minnesota Supreme Court has explained “culpable negligence” as similar to “recklessness” or “intentional conduct which the actor may not intend to be harmful but which an ordinary and reasonably prudent man would recognize as involving a strong probability of injury to others.”

In another case, the state’s highest court said the statute required prosecutors to prove “an element of awareness of the risk by the defendant.”

High-profile civil rights attorney Ben Crump reacted to the charge by rubbishing the suggestion that Potter made a mistake:

While we appreciate that the district attorney is pursuing justice for Daunte, no conviction can give the Wright family their loved one back. This was no accident. This was an intentional, deliberate, and unlawful use of force. Driving while Black continues to result in a death sentence. A 26-year veteran of the force knows the difference between a taser and a firearm. Kim Potter executed Daunte for what amounts to no more than a minor traffic infraction and a misdemeanor warrant. Daunte’s life, like George Floyd’s life, like Eric Garner’s, like Breonna Taylor’s, like David Smith’s meant something. But Kim Potter saw him as expendable. It’s past time for meaningful change in our country. We will keep fighting for justice for Daunte, for his family, and for all marginalized people of color. And we will not stop until there is meaningful policing and justice reform and until we reach our goal of true equality.

Crump is representing the family of Daunte Wright.

[Editor’s note: this breaking news report has been updated.]