Capitol Rioter Arrested After Identifying Himself to U.S. Marshal During Unrelated Search for Missing Child 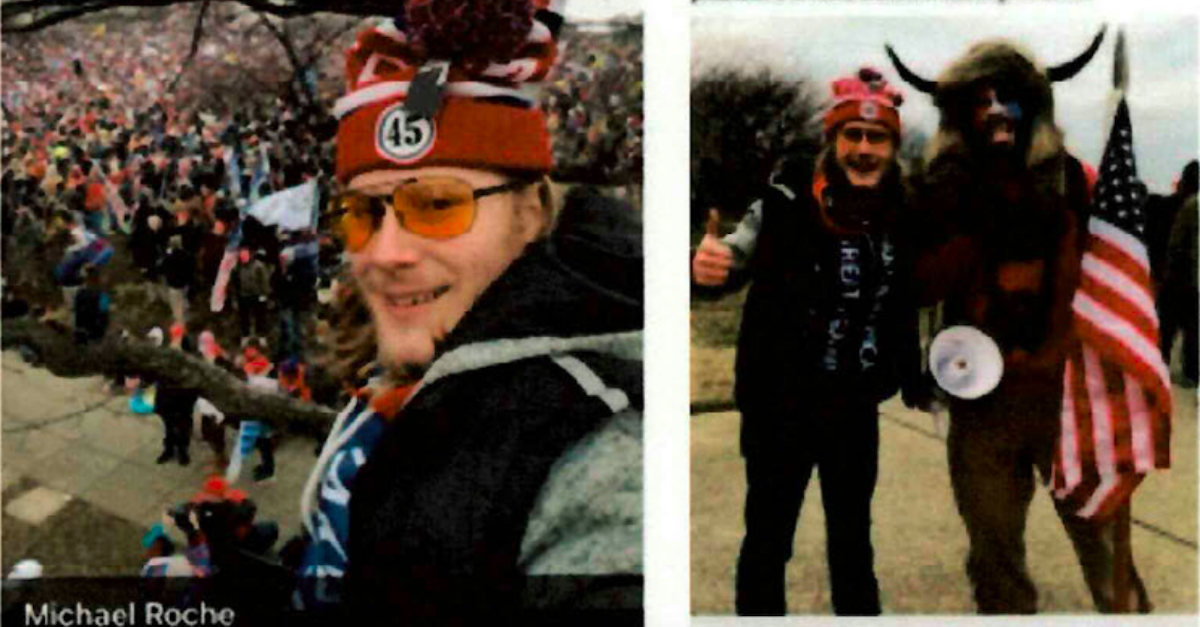 A 26-year-old Tennessee man was arrested Tuesday after he awkwardly identified himself as a participant in the Jan. 6 riots at the U.S. Capitol to law enforcement agents who had visited his home in search of a missing child in an unrelated case.

According to the criminal complaint, filed last week in the U.S. District Court for the District of Columbia, deputies with the U.S. Marshal Service (USMS) and members of the Tennessee Bureau of Investigation (TBI) were “attempting to locate a missing child” when they knocked on an apartment door in Murfreesboro, Tennessee where they believed the child’s family lived.

“A man who identified himself as Michael Roche and a woman (Individual-2) were inside the Murfreesboro Apartment,” the complaint stated. “Individual-2 acknowledged that Roche had been all over the news, and that they were expecting law enforcement to come for him. The USMS deputies placed Roche in handcuffs for their safety and sat him down. Roche stated that he believed he had outstanding arrest warrants and that the USMS were there to arrest him for being in Washington, D.C. on January 6, 2021.”

Soon thereafter, USMS confirmed that there was no outstanding arrest warrant for Roche and left the apartment “without incident.” Later that day the U.S. Marshals contacted the FBI who provided the Marshal with photographs and a video of Roche from the Capitol.

“[U.S. Marshal William] Etheridge confirmed that the Roche who appeared in the photos and video was the same individual that Etheridge engaged with at the Murfreesboro Apartment.”

In a video posted to Facebook on Jan. 6, Roche introduced himself by name and confirmed that he was inside the Capitol after storming it.

“We did get a chance to storm the Capitol. And we made it into the chamber,” he says, according to the complaint. “We managed to convince the cops to let us through. They listened to reason. And when we got into the chamber…we all started praying and shouting in the name of Jesus Christ, and inviting Christ back into our state capitol.”

Roche also posed for a photograph with perhaps the most widely recognized Capitol rioter Jacob Chansley, also known as “the QAnon Shaman.” Roche posted the “pic” on Facebook of himself with a “wonderful man.” He claimed the media tried to smear Chansley as “antifa.”

“Took a pic of this wonderful man from [Arizona] before the media tried to smear him as antifa,” Roche wrote in the photo’s caption. “My brother was shoulder to shoulder prayin in Jesus name in the main capital chamber holding up the Bible. I was too [sic] see those photos. Do NOT believe what you hear.”

Roche was also filmed inside the Senate chamber standing next to Chansley behind the Vice President’s desk where the two shouted and prayed.

Roche is facing charges of Knowingly Entering or Remaining in any Restricted Building or Grounds Without Lawful Authority, Disorderly and Disruptive Conduct in a Restricted Building or Grounds, Entering and Remaining on the Floor of Congress, Disorderly Conduct in a Capitol Building, and Parading, Demonstrating, or Picketing in a Capitol Building.

He had his initial appearance in Tennessee federal court on Tuesday and was released on conditions.