Former Federal Prosecutor Tells Laura Ingraham: ‘Get it Right’ or ‘Keep My Name Out Your Mouth’ 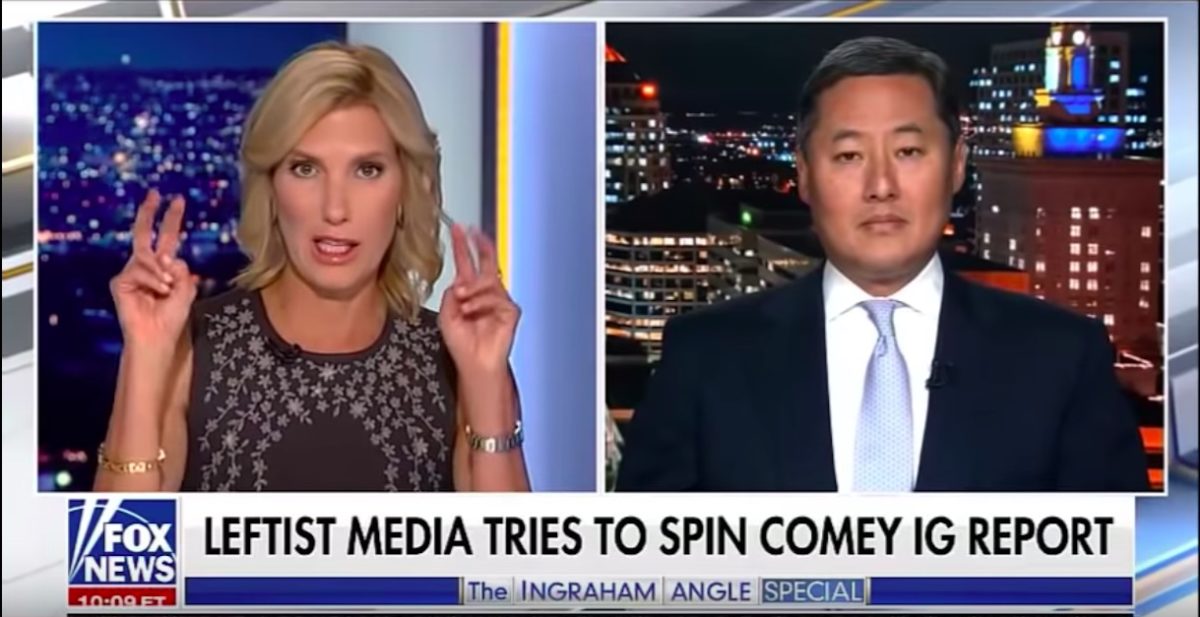 Fox News’ Laura Ingraham on Friday took several jabs at former federal prosecutor Elie Honig, whom she labeled as a “media hack,” for his analysis of the inspector general’s report on James Comey’s handling of government documents. Honig responded to Ingraham’s segment by pointing out that she only played a small segment from his CNN appearance, which she used completely out of context from the totality of Honig’s analysis, and even quoted Grammy award-winning rap group Three-6-Mafia.

Ingraham opened the segment entitled, “Leftist Media Tries to Spin Comey IG Report,” with her guest John Yoo, by sardonically referring to Honig as a “legal analyst” while pantomiming air quotes. She then played the back end of his interview with Don Lemon from Thursday night where Honig said that despite Comey’s actions, it does not change the content in his memos or the fact that Trump likely committed obstruction of justice, a take she called “cuckoo for Cocoa Puffs.”

Honig did not pull any punches in his response Saturday morning.

“You can use sarcastic finger quotes when referring to me as a “Legal Analyst” but I prosecuted cases for 14 years and put thousands of criminals in jail, while your guest never tried a single criminal case in his life and wrote the torture memos,” Honig said, referring to Yoo, a former deputy assistant attorney general under President George W. Bush.

Honig then went on to point out that not only was he critical of Comey during his CNN appearance, but he’s also been a vocal critic of Comey on several other past occasions.

“In fact, I’ve been vocally critical of Comey, in writing…and on air. In writing, I call the OIG report entirely credible, call it a ‘firm rebuke’ of Comey, even ridicule Comey for his ‘Higher Loyalty’ rhetoric,” Honig wrote, adding, “I’ve also been critical of Comey on air, calling him out for breaking FBI rules.”

Honig concluded by reiterating that Ingraham failed to portray his comments in proper context, adding a Three-6-Mafia lyric to hammer home the point.

“Ultimately – as I’ve said on air – Comey did wrong in handling his memos BUT it’s a hill of beans compared to Trump’s crimes in office, as described in those memos. Your guest, again, says nothing whatsoever to defend Trump – he just (actually) agrees with me on Comey,” Honig said.

“So [Laura Ingraham and Fox News], play my clips anytime you want.  But either get it right or, as Three 6 Mafia once said, keep my name out your mouth.”