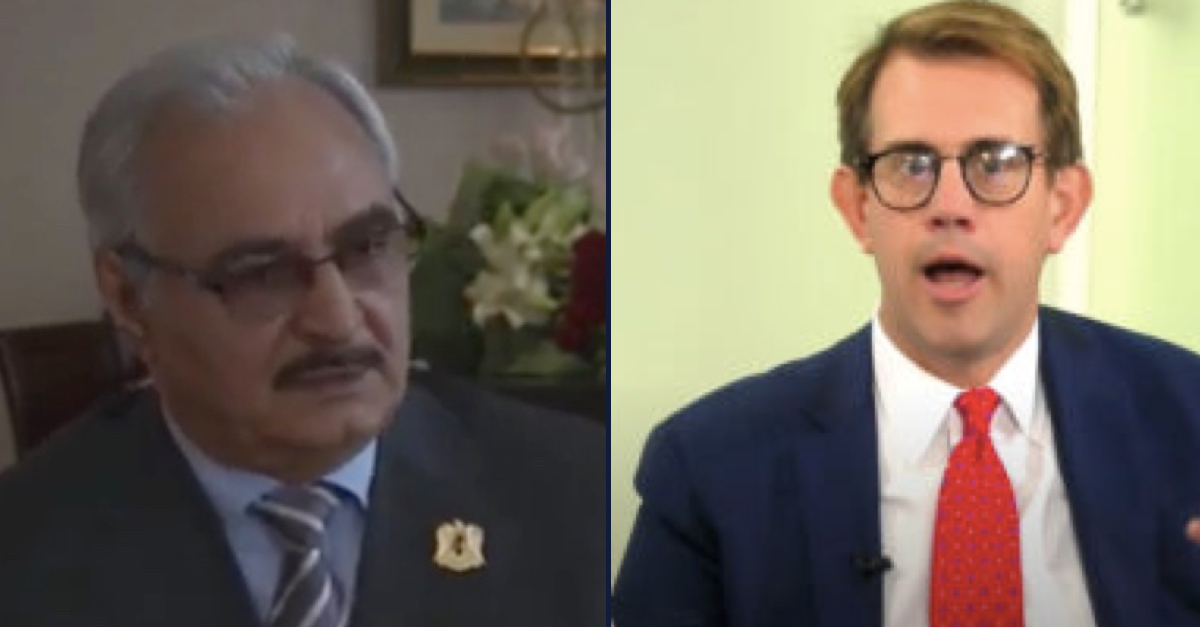 The deposition of a Libyan military commander accused of torture and other crimes against humanity may go forward in the lawsuit against him brought by Libyan nationals, a federal court has ruled.

Khalifa Hifter, the commander of the Libyan National Army, has been sued by four Libyan nationals who say that Hifter is responsible for the torture and deaths of many of their family members.

Hifter is a dual U.S-Libyan citizen who has commanded the Libyan National Army (LNA) since 2014, when he declared a coup against the Libyan government.

“Since that time, he has waged a campaign of illegal siege warfare in Libya in an effort to completely overthrow the recognized government of the State of Libya, the Government of National Accord (‘GNA’),” the complaint says.

The plaintiffs sued Hifter under the Alien Tort Statute, which allows non-U.S. citizens to sue in U.S. courts for violations of “the law of nations or a treaty of the United States.” That statute, the complaint says, provides a civil cause of action for “victims of torture and the heirs of victims of extrajudicial killings when acting under the actual or apparent authority, or color of law, of any foreign nation.”

Hifter has “extensive property, business, and personal contacts in the Eastern District of Virginia,” the complaint says. Those interests allegedly include a condo in Falls Church, a single-family home in Vienna, and an 85-acre estate in Keysville.

The complaint also states that Hifter “appears to have invested at least $8.5 million in property” in the region since 2014, and says Hifter and his son have contracted with a Virginia-based political consulting company “to provide political and strategic consulting services for the Hifter family.”

The plaintiffs are Ali Abdalla Hamza, a dual Canadian/Libyan citizen, and Nehma Abdalla Al-Mahdi Hamza, Abdelhalim Abdalla Mahdi Hamza, and Salimah Jibreel, all Libyan citizens and resident whose family members were injured or killed by the forces under Hifter’s command.

According to the complaint, the family members of the Hamza plaintiffs were “victims of LNA war crimes, crimes against humanity, and terrorism under Defendant Hifter’s command.” A military campaign in the Hamza’s neighborhood forced the family to flee their home in February 2016. Over the course of the following months, as Hifter’s alleged bombardment of civilian targets continued, the LNA refused to allow refugees, including the Hamza plaintiffs’ mother and their siblings, to evacuate, and in some cases targeted them directly.

After months under military siege, which allegedly included being targeted by snipers and being forced to eat grass and tree bark, the Hamza plaintiffs’ family members were killed when the LNA carried out a strike on the block where they were sheltering.

Jibreel’s daughters, ages 3 and 8, and an 11-year-old son were killed in January 2017 when a shell hit their house. Her sole surviving daughter, 10, was injured, along with her husband, who has since been detained by LNA forces “without charges” and “is still being held in incommunicado detention,” according to the complaint.

The plaintiffs sued in September of 2020. After allowing part of the case to go forward following a motion to dismiss in March 2021, U.S. District Judge Leonie Brinkema stayed the case in November after Hifter, through attorney Jesse Binnall, successfully argued that the case should be paused until elections in Libya were over (the elections had been expected to take place within the next month), and until “the political situation in Libya is more stable.”

After losing a motion for reconsideration in December, the plaintiffs again asked Brinkema to resume the case in February, and filed a “factual update” in support of that motion.

“UN officials had optimistically hoped the elections would happen by June 2022,” the February motion said. “But it is now clear that the Libyan elections will not happen during 2022, and there is no indication as to when they might ever take place. On February 7, 2022, Libya’s Parliament announced there will not be any elections in 2022. In fact, National elections are likely to not take place for well more than a year from now. Indeed, the selection of a new Prime Minister on February 10, 2022, over the objections of the current Prime Minister, is said to have ‘hurtled [Libya] deeper into political chaos’. There is absolutely no end in sight as ‘the country is at risk of plunging back into war and dueling governments.'”

That petition was apparently enough for Brinkema to remove the stay and allow the case to proceed.

“For reasons stated in open court, Plaintiff’s Second Motion for Reconsideration … is granted and this civil action is reinstated on the active docket of this court,” Friday’s order said.

Brinkema, a Bill Clinton appointee, also ordered Hifter to pay more than $4,000 in costs, the “undisputed amount of out of pocket expenses that plaintiffs incurred to organize the two depositions that defendant failed to attend,” within 14 days.

“If defendant fails to pay those costs on time, the Court will find the defendant in default,” the order said.

Binnall, Hifter’s lawyer, is perhaps better known as the attorney for Donald Trump who has tried—and tried, and tried, largely without success—to block the release of documents to the House committee investigating the Jan. 6 attack on the U.S. Capitol, overturn the 2020 presidential election results in Georgia, and toss lawsuits seeking to hold Trump liable for the Capitol siege.

“This lawsuit is all about justice for victims of war crimes, pursuant to established U.S. and international law,” attorney Mark Zaid told Law&Crime. “The internal politics of Libya are not our concern but the conduct of a U.S. citizen who has allegedly perpetrated these atrocities most certainly demands legal accountability and we intend to continue to pursue him.”

Binnall did not immediately respond to Law&Crime’s request for comment.

You can read Brinkema’s order, below.

Editor’s note: this story has been updated to include a comment from attorney Mark Zaid.