A federal judge in Washington, D.C. on Wednesday ordered the State Department to produce records pertaining to the Trump administration’s controversial and irregular Ukraine communications within the next 30 days. Rudy Giuliani’s texts and emails appear to be front and center.

U.S. District Judge Christopher Cooper sided with government ethics watchdog American Oversight, which sued the State Department to comply with its Freedom of Information Act (FOIA) request for any records relating to efforts by President Donald Trump and his Giuliani to pressure Ukraine to launch an investigation into former Vice President Joe Biden and his son Hunter Biden. Records relating to the administration’s decision to recall former Ukrainian ambassador Marie Yovanovitch were also included in the request.

As CNN noted, records relating to Giuliani’s communications — ones with Secretary of State Mike Pompeo among them — could also be fair game; Giuliani is not an administration official and there may not be an applicable exemption to the disclosure of such communications.

Pompeo recently accused House Democrats of attempting to “intimidate, bully, and treat improperly” career employees at the State Department. He also failed to produce documents Democrats demanded pursuant to their impeachment inquiry. Judge Cooper’s order comes down one day after top U.S. diplomat to Ukraine Bill Taylor testified on Capitol Hill. Taylor mentioned Pompeo by name more than a few times. Trump has predictably gone after Taylor, calling him a “Never Trumper.” But Pompeo recruited Taylor for the job, and Taylor said he accepted the role believing that he could be effective. Taylor’s testimony, page 3: 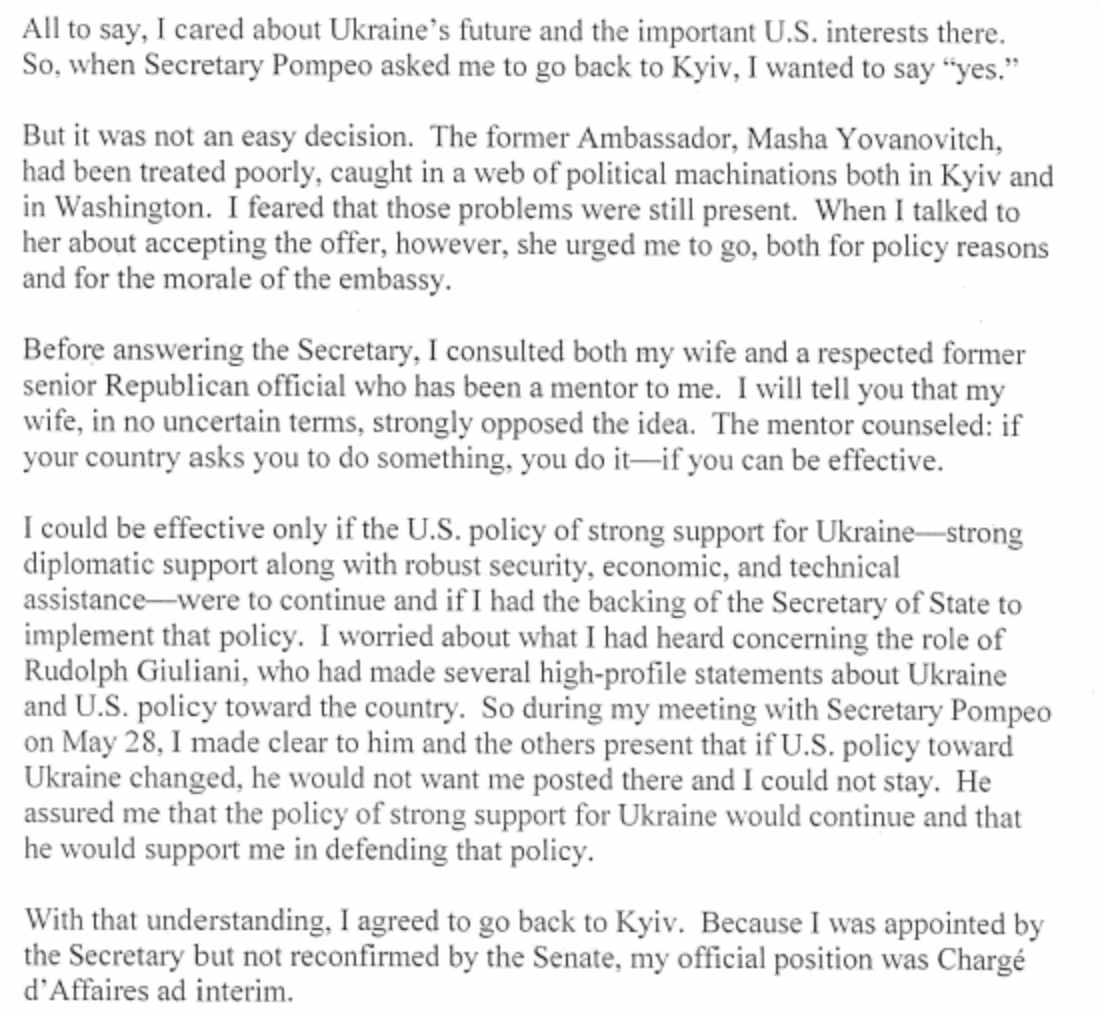 Citing the urgency of the matter, American Oversight filed a motion earlier this month for a preliminary injunction to compel the department’s immediate cooperation in releasing the documents.

During Wednesday’s hearing on the matter, Daniel McGrath, one of the attorneys representing American Oversight’s urged the court to order the immediate release of the documents, contending that the records were “a matter of immense public importance,” according to the New York Times.

Cooper conceded that while he is “generally skeptical” of granting preliminary injunctions, the documents at issue were clearly of “critical importance,” according to a National Law Journal report. Cooper instructed the State Department and American Oversight to work together in identifying which relevant documents do not contain sensitive information and can be released to the public.

Although the order did not specify the number of documents that will ultimately be released, McGrath said the group would be willing to narrow the scope of its request ensure responsive documents can be delivered within the 30-day time frame.

“[Giuliani’s] emails, text messages — which he showed on TV — are going to be subject to public disclosure with limited redactions,” Evers said. “It’s possible that this administration will jump through some legal hoops to try to withhold them, but we have the court today urging the parties to focus on those communications as top priority.”