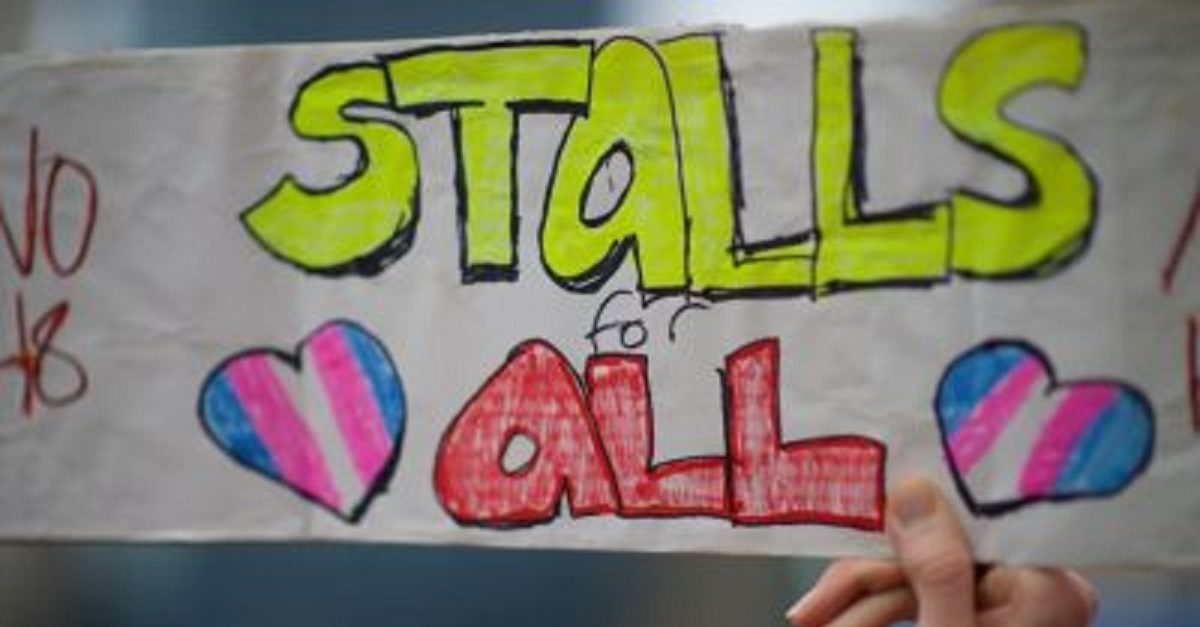 A federal judge in Tennessee on Friday blocked a first-of-its-kind law that would have required any business or government building open to the general public to post a sign signifying whether they allow transgender people to use any bathrooms, locker rooms, shower facilities, or other dressing areas.

In a 31-page ruling Judge Aleta A. Trauger, an appointee of Bill Clinton, issued a temporary injunction — reasoning that the law likely violates the First Amendment by compelling speech from private entities.

“Particularly repugnant to the First Amendment is when the government forces a private party to voice the government’s compelled message, not merely in private or in direct dealings with government itself, but in public, as an involuntary instrument for fostering public adherence to an ideological point of view,” Trauger wrote. “On its face, the Act unambiguously mandates that the plaintiffs and other regulated parties speak a particular message, in public, that they have shown, with evidence, that they earnestly consider to be anathema to their beliefs and values. It even tells them what colors to use: red and yellow, like a hazard sign. That the First Amendment would look askance at such a practice, therefore, should surprise no one.”

The signing of HB1182 made Tennessee the first state in the U.S. to mandate public notices for facilities that are transgender inclusive, and the legislation is being challenged in court as unconstitutional under the First Amendment. The injunction is just an early piece of the legal challenge.

According to the measure, the sign is required to meet several specifications concerning its location and appearance, and the text of the sign must read: “This facility maintains a policy of allowing the use of restrooms by either biological sex, regardless of the designation on the restroom.”

Additionally, the top one-third of the sign has to be red; the word “NOTICE” must appear in yellow text.

Tennessee just signed into law that businesses have to post THIS sign if they let transgender people use the restroom: pic.twitter.com/YaQ0fN6sD9

The American Civil Liberties Union (ACLU) challenged the act in June, filing a lawsuit on behalf of Nashville restaurant owner Kye Sayers and Sanctuary Performing Arts Center owner Bob Bernstein, both of whom wanted to continue with an informal policy of allowing customers to decide the restroom of their choice. The suit argued that the sign requirement served no state purpose and merely compelled private entities to promote “a controversial and ideological viewpoint.”

Judge Trauger agreed that the state failed to show any justification for the law other than a baseless assertion that it would reduce the “risks of sexual assault and rape.”

“Even if one were to assume, more modestly, that there is a compelling interest in allowing patrons of a business to know its bathroom policies—which the court finds doubtful— then that purpose could still be served by simply requiring businesses to disclose that information when asked or to keep it filed away somewhere accessible,” she wrote. “There would certainly be no need to dictate the precise language required for the notice, the precise size and location of the disclosure, or that the sign have a red-and-yellow, warning-sign color scheme, as if to say, “Look Out: Dangerous Gender Expressions Ahead.”

Hedy Weinberg, the executive director of the ACLU’s Tennessee chapter, praised the ruling in a statement.

“This law is bad for businesses in Tennessee, and most importantly, harmful to transgender people,” Weinberg said. “We are glad the court saw that this law is likely unconstitutional and hope that the state gives up the wasteful effort to defend discrimination and a violation of the First Amendment.”

Read the full ruling from the judge below.