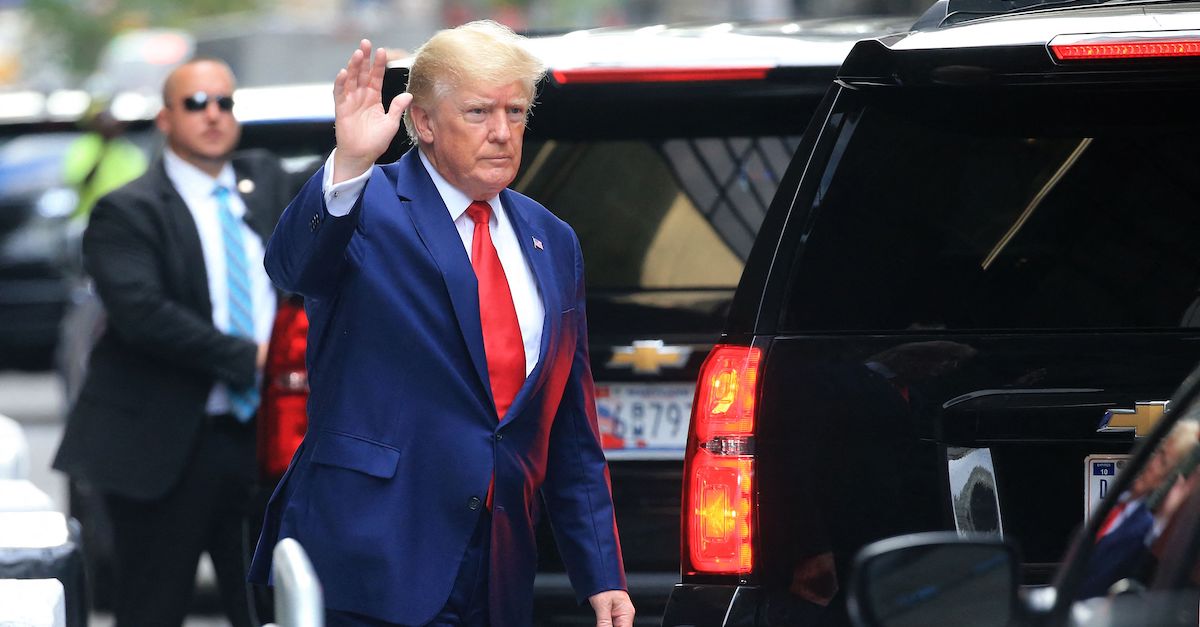 Former US President Donald Trump waves while walking to a vehicle outside of Trump Tower in New York City on Aug. 10, 2022.

Donald Trump’s announcement on Wednesday that he invoked his Fifth Amendment right against self-incrimination during his deposition in the New York attorney general’s investigation into his business marked a dramatic reversal for the former president, at least rhetorically.

Trump once said on the campaign trail that availing oneself of that treasured constitutional right is something only organized crime figures would do.

“The mob takes the Fifth,” Trump said in 2016. “If you’re innocent, why are you taking the Fifth Amendment?”

Referring to that widely quoted query, Trump wrote: “Now I know the answer to that question. When your family, your company, and all the people in your orbit have become the targets of an unfounded, politically motivated Witch Hunt supported by lawyers, prosecutors, and the Fake News Media, you have no choice.”

“On the Front Page of Every Newspaper in the World”

The Fifth Amendment of the U.S. Constitution allows the guilty and the innocent to avoid testifying against themselves, without any criminal penalty. A jury may not consider it during a prosecution, but the decision to invoke that right could backfire in civil proceedings.

That in fact was the central argument deployed by Trump’s legal team in fighting off a subpoena from New York Attorney General Letitia James (D), who has been investigating for years whether the Trump Organization fraudulently inflated or deflated assets for tax purposed. Her probe is civil in nature, but she has been sharing information with Manhattan District Attorney Alvin Bragg (D), who has been investigating the former president criminally.

The parallel proceedings, Trump’s legal team argued, put him in a Catch-22 where asserting his rights can put him in civil jeopardy.

Trump’s lawyer Alan Futerfas also noted to the judge that the former president taking the Fifth would be “on the front page of every newspaper in the world,” a prediction that immediately came to pass on the website of the New York Times, his one-time hometown paper.

Manhattan Supreme Court Justice Arthur Engoron rejected that argument, finding that Trump couldn’t use the Fifth Amendment as “both a sword and a shield.” Two levels of appellate courts, up to New York’s highest Court of Appeals, agreed.

“They were rejected on appeal because that is the way the American jurisprudential system works,” former federal prosecutor Mitchell Epner told Law&Crime in a phone interview. “It works that way every day for countless litigants who are not named Donald Trump.”

“It’s a smart move for him,” said Rodgers, who is now a CNN legal analyst.

“The negative inference that can be drawn at a civil trial down the road isn’t great for him — that’s the consequence of refusing to testify today, that the jury will be instructed that they can infer that his testimony would have harmed his case — but it’s small potatoes compared to the substantial risk that he would (1) disclose damaging information that could be used against him civilly and/or criminally, (2) lie to avoid disclosing harmful information and thereby open himself up to perjury charges, or both,” she told Law&Crime.

“He’s Mute for the Rest of the Case”

Trump’s concerns of civil liabilities grow less theoretical by the day. James’s investigation has gathered information for more than two years. Her office has said that the former president inflated the size of his Trump Tower triplex by nearly three times, and the Trump Organization valued rent stabilized units 66 times higher than an outside appraiser did. She has sought twice before to pursue the so-called “corporate death penalty,” successfully so with the now-shuttered Trump Foundation. A Manhattan judge rejected the AG’s bid to shut down the National Rifle Association for alleged violations of New York charity law.

As the Trump Organization isn’t a charity, any case against it would operate under a different legal landscape than those cases.

For now, the attorney general’s office is playing its cards close to the vest.

“Attorney General Letitia James took part in the deposition during which Mr. Trump invoked his Fifth Amendment right against self-incrimination,” a spokesperson said in a statement. “Attorney General James will pursue the facts and the law wherever they may lead. Our investigation continues.”

By all appearances, that investigation seems to be winding down. The judge presiding over the probe held Trump in contempt to the tune of $10,000 per day in April for non-compliance with a subpoena, but he capped that penalty at $110,000 in June after Trump and his lawyers swore in detailed affidavits that they had no more evidence to provide.

If Jones’s lengthy investigation is followed by a long-anticipated lawsuit, Trump’s decision to plead the Fifth can be used against him.

“The fact that Donald Trump has asserted the Fifth Amendment means that he can’t put in an affidavit or anything that would try to deny the specific assertions,” noted Epner, who is now a partner at the firm Rottenberg Lipman Rich PC. “He’s mute for the rest of this case.”

A jury in a criminal case cannot draw any adverse inference from Trump having taken the Fifth, but a civil jury can.

“Second, if it goes to a jury, the jury will be instructed that they can presume if they wished, that the reason that Donald Trump did not answer the questions is that the answer to every question that would be asked to him would have been unfavorable to him,” Epner noted. “And on that basis, alone, they could find against him.”