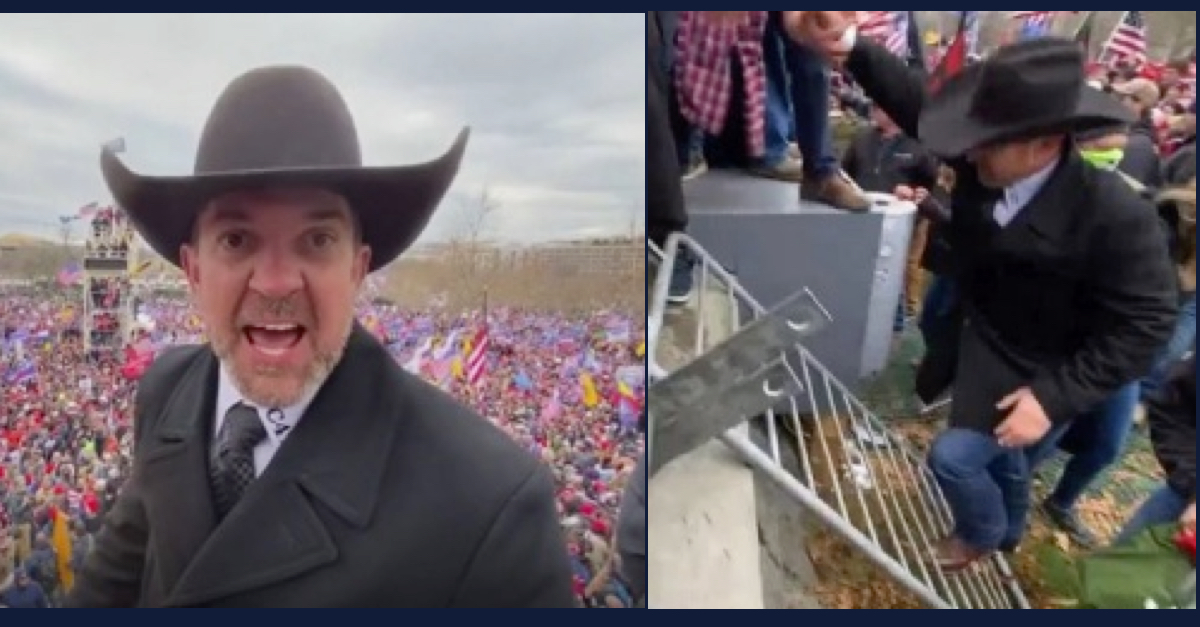 Leading First Amendment experts have weighed in on a lawsuit against a New Mexico man convicted in the Jan. 6 attack on the U.S. Capitol, saying that he cannot use the First Amendment as a defense to the constitutional prohibition against insurrectionists holding public office.

Griffin was convicted of a misdemeanor trespassing charge in March following a bench trial before U.S. District Judge Trevor McFadden, a Donald Trump appointee, of entering a restricted area on Capitol grounds, a misdemeanor. Griffin was at the Capitol that day seen standing over a crowd of Trump supporters in an apparent effort to lead the group in prayer. He was also seen using a metal barricade as a ladder to reach Capitol grounds.

According to prosecutors, Griffin had pledged to return to the Capitol specifically “plant our flag” on the desks of House Speaker Nancy Pelosi (D-Calif.) and Senate Majority Leader Chuck Schumer (D-N.Y.). He also allegedly threatened that “there’s gonna be blood running out of that building.”

The government watchdog group Citizens for Responsibility and Ethics in Washington (CREW) filed a lawsuit in March against Griffin in on behalf of three New Mexico residents looking to remove Griffin from his County Commissioner position and blocking him from running for office again. In their lawsuit, plaintiffs Marco White, Mark Mitchell, and Leslie Lakind argue that the 14th Amendment’s Disqualification Clause prohibits Griffin from holding public office.

Last week, a group of First Amendment lawyers and scholars, along with representatives from religious advocacy groups, filed an amicus brief in the case, anticipating that Griffin will claim that his First Amendment rights protect him against the disqualification clause — and saying that his defense is, essentially, legal hogwash.

In their brief, they get right to the point.

“Griffin is mistaken,” the brief says regarding the Capitol rioter’s anticipated First Amendment defense. “[T]he people of the United States may, without infringing upon any First Amendment rights, amend the Constitution to ban oath-breaking insurrectionists from seeking or holding office; and a court may — indeed, must — enforce that constitutional mandate against those, like Griffin, who flout that ban.”

The brief notes that Griffin’s case “does not involve a mere statute or regulation,” but rather “a constitutional command that officials who swore to support the Constitution, yet engaged in insurrection or rebellion against the United States, do not get a second chance to violate their oath unless and until they are rehabilitated by an act of Congress [emphasis in original].”

Griffin’s anticipated argument — that the Disqualification Clause of the 14th Amendment is itself unconstitutional — doesn’t hold water, the brief says, arguing that its never envisioned it in conflict with the First Amendment, as Griffin would suggest.

“Griffin ignores the fact that the drafters of the Clause possessed full knowledge of the First Amendment, yet provided no First Amendment defense to disqualification,” the brief says. “Moreover, his ‘unconstitutional constitutional amendment’ theory has never succeeded in American courts and was specifically rejected by the Clause’s drafters. That theory has gained a foothold in some foreign jurisdictions where the legislature possesses plenary power to undermine or even replace the national constitution through repeated amendment. But in the United States, the arduous Article V amendment process historically has provided sufficient protection against constitutional death-by-a-thousand-amendments.”

Calling Griffin’s argument an “inherently implausible theory,” the amicus argue that the Disqualification Clause “poses no threat to speech or expression protected by the First Amendment.” Instead, it applies only to a “unique category of persons who assumed their positions voluntarily — namely, current and former officeholders who violated their oath — and it directly affects only their limited and qualified right to hold office.”

Griffin did, in fact, raise First Amendment issues in a request for an injunction he filed in May in federal court in New Mexico. That lawsuit sought to block White, Mitchell, and Lakind from pursuing their state claim against him.

“As a County Commissioner, Griffin is subject to NMSA 1978, § 44-3-1 et seq., and, in fact, Defendants have challenged his ability to hold that office under the statute,” Griffin’s motion said. “If successful, Griffin would be removed from office and barred from running for state or federal office in the future. That is quintessential First Amendment activity.”

Read the amicus brief, below.