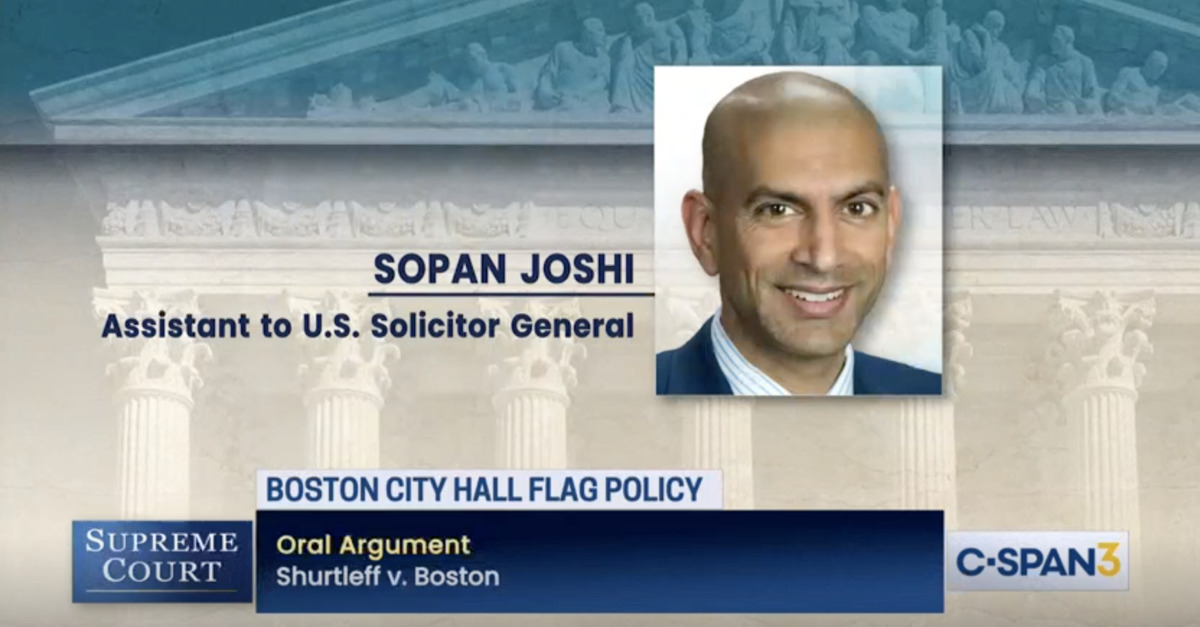 As former president Donald Trump‘s legal battle with prosecutors over documents seized during an FBI raid on his Mar-a-Lago estate intensifies, the U.S. Department of Justice is lawyering up with an eyebrow-raising new hire in the form of a former law clerk for late Supreme Court Justice Antonin Scalia.

Sopan Joshi, on loan from the U.S. Solicitor General’s office, has argued seven cases before the U.S. Supreme Court. The DOJ added him to its roster of attorneys as the U.S Court of Appeals for the 11th Circuit will hear arguments over the fate of the special master assigned to review the cache of documents on Trump’s behalf.

The 45th president succeeded over the DOJ’s loud protests in September – weeks after the August search-and-seizure warrant was effectuated; well after federal agents and attorneys had reviewed many of the documents – when Trump-appointed U.S. District Judge Aileen Cannon tapped Senior U.S. District Judge Raymond Dearie, a devoted criminal justice reform advocate now that his judicial career is essentially over, to determine whether or not the documents at the heart of the matter are genuinely classified and if any of those documents touch upon attorney-client privilege issues.

After losing at the district court level, the DOJ appealed to the conservative 11th Circuit, asking for the appeals court to overturn Dearie’s authority – seeking limited relief to a small universe of documents while also asking for the special master to be sacked altogether. Trump, through his attorneys, has asked the appellate court to allow Dearie to finish his court-appointed work.

The role Joshi will play is unclear but his addition to the government’s team was praised by legal observers.

“The addition to the team of an experienced #SCOTUS advocate like Sopan Joshi is another sign of how seriously the DOJ is taking the Mar-a-Lago matter,” attorney and journalist David Lat tweeted.

Joshi graduated from Northwestern University’s Pritzker School of Law in 2013 and then went on to clerk for legendary Judge Richard Posner on the Seventh Circuit Court of Appeals. In 2014, he was hired by Scalia for the 2015 Supreme Court term.

“I’m looking forward to clerking for Justice Scalia, and I’m honored and humbled to have been given this opportunity,” Joshi had said in an announcement at the time. “Clerking is great experience for any lawyer. For one thing, it’s intellectually stimulating. More practically, it gives you an in-depth insight into how judges decide cases, which can be invaluable knowledge to have when advising clients or writing briefs in future litigation work.”

Scalia died in early 2016 and Joshi went on to briefly clerk for Justice Samuel Alito before leaving the federal judiciary. After that, he worked for elite law firm Kirkland & Eliis LLP for two years before returning to government service in September 2018 when he was hired by the Trump administration as an assistant to the Solicitor General.

A Twitter account purporting to belong to Joshi suggests the attorney is fan of British novelist George Orwell:

During his tenure with the Solicitor General’s office, Joshi has argued in numerous high-profile cases, including a complex First Amendment case about Boston’s city government refusing to fly a Christian flag. In that case, the government, and Joshi, took the City of Boston’s side – and ultimately lost in a unanimous ruling.

Joshi took neither side in a case about whether investment bank Goldman Sachs is on the hook for lying about subprime mortgages. He explained during oral argument that the government was just interested in clarifying the state of the law.

In one decided loss for the Trump administration, Joshi argued that the government could not be sued for guidance directing the Commerce Department to exclude undocumented immigrants from the apportionment base following the 2020 Census.