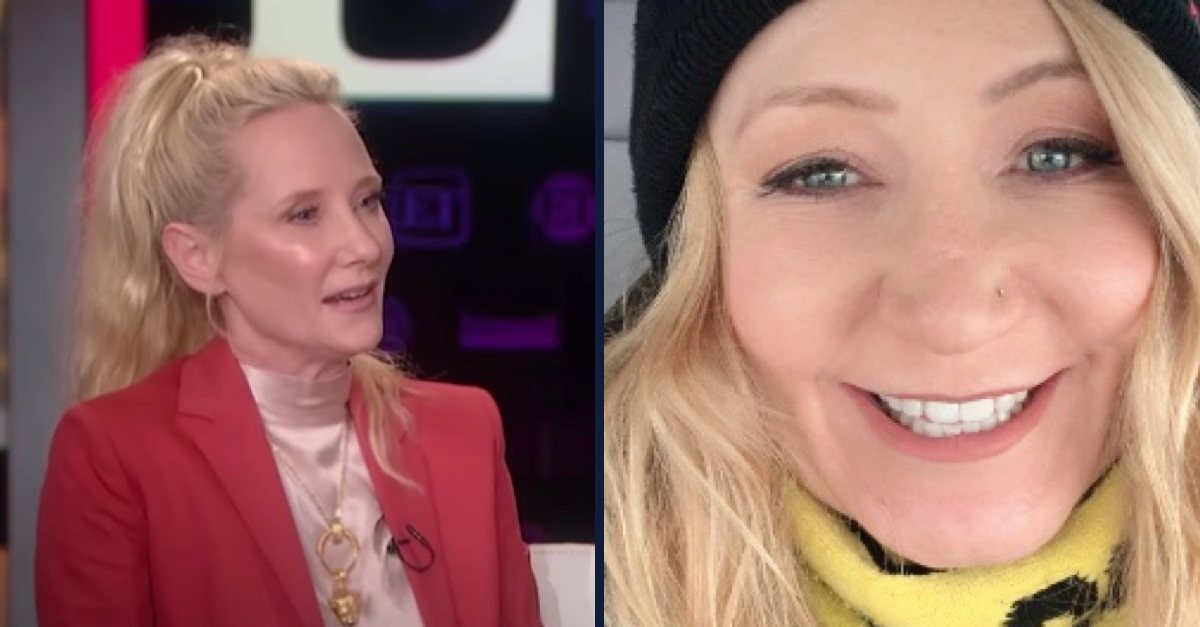 A Los Angeles resident is suing the estate of Anne Heche, saying that the actress “ravaged” her life by driving negligently and ultimately crashing her car into the woman’s house, causing its collapse.

In August, Heche was behind the wheel as her car sped through the west Los Angeles neighborhood of Mar Vista, ultimately crashing into the house where Lynne Mishele lived. Both the car and the home caught fire; Heche died days later from her injuries.

Mishele was home when Heche’s car crashed through the walls. Now, in a complaint filed on Nov. 9 in Los Angeles Superior Court, Mishele is seeking both compensatory and punitive damages from Heche’s estate, alleging negligence, negligent infliction of emotional distress, and trespassing.

While the filing is not without sympathy, calling the crash a “horrific and tragic incident that stunned all of Hollywood, if not the country and the world,” it quickly focuses on how it “personally ravaged” Mishele’s life and focuses on Mishele’s experience that day while also highlighting Heche’s culpability.

The filing from attorney Shawn Holley describes Mishele as a “small business owner by trade and an animal lover by heart” who was inside her home in Mar Vista, quiet neighborhood just east of the beachfront locales of Santa Monica and Venice, when “a sudden and terrifying blast shook her to her core.”

“It was as though a record-breaking earthquake had hit, and Plaintiff was right in the middle and on the fault line,” the complaint continued, adding that Mishele had found herself “dumbstruck and immobile” and was only saved from the collapsing house “due to the actions of quick-responding neighbors[.]”

Heche’s car, a blue Mini Cooper, had “careened off of the road and barreled through the front of [Mishele’s] house and deep into its interior,” the complaint said. “The front end of the car, incredibly, came to a halt just feet away from Plaintiff and her pets: two dogs named Bree and Rueben and a tortoise named Marley.”

The complaint then paints a damning picture of Heche’s actions leading up to the horrific crash:

As worldwide news outlets would soon report, the car was owned and being driven by celebrity actress Anne Heche. Just earlier, Heche had been witnessed driving recklessly and erratically in the moments leading up to her smashing into Plaintiff’s house, even slamming into a nearby apartment complex garage. Bystanders captured on video pleaded with Heche to stop driving before she injured others or herself. Although Heche sped away from that scene, she would not survive the crash into Plaintiff’s house. A blood analysis performed after the incident confirmed the presence of both cocaine and narcotics, including fentanyl, in Heche’s system. Heche was declared legally dead days later.

Holley says that the focus on Heche detracted from her client’s own near-brush with death.

“While the media focused its reporting on Heche’s condition, the August 5, 2022 incident left Plaintiff completely traumatized, unusually startled by hearing loud noises, plagued by nightmares and flashbacks of the incident, terrified of walking outside, and, atop that, without a place to live,” the complaint says. “As a direct consequence of Heche’s outrageous conduct and unlawful acts, Plaintiff and her beloved pets almost lost their lives, not to mention that Plaintiff also had an entire life’s worth of her personal possessions destroyed in the fire. These included irreplaceable tokens and mementos from her deceased parents, who passed away 44 days apart in 2020.”

“Plaintiff has been injured economically, psychologically, physically and emotionally, and has suffered and will continue to suffer substantial damage well into the future,” the complaint adds.

Holley describes Heche as having caused “severe structural compromise” to Mishele’s home, causing it to “immediately erupt[] into a towering inferno” that took 59 firefighters more than an hour to extinguish. The complaint alleges that Heche failed to exercise “due care” in driving her car, thereby breaching a standard duty of care to take steps to avoid causing foreseeable injury.

Mishele also accuses Heche of Negligent Infliction of Emotional Distress, a claim available to people who were in a “zone of danger” created by someone acting negligently, even if they were not physically injured themselves.

“Plaintiff was in the zone of danger of Heche’s vehicle as it flew into her 738-square foot home,” the complaint says. “Plaintiff could have been seriously injured by the vehicle and reasonably feared for her own safety.”

Mishele’s complaint was filed as part of an ongoing battle for control over the late actress’ estate. As Entertainment Tonight reported, the current executor of Heche’s estate is 20-year-old Homer Laffoon, Heche’s son with former husband Coley Laffoon. Homer Laffoon is being sued by James Tupper, the father of Heche’s son Atlas Tupper, 13. James Tupper has accused Homer Laffoon of mistreating his half-brother, acting “in a hostile manner” toward him, and refusing to communicate with him since Heche’s death.

You can read Mishele’s complaint here.

[Image of Heche via Entertainment Tonight/YouTube screengrab. Image of Mishele via GoFundMe.]