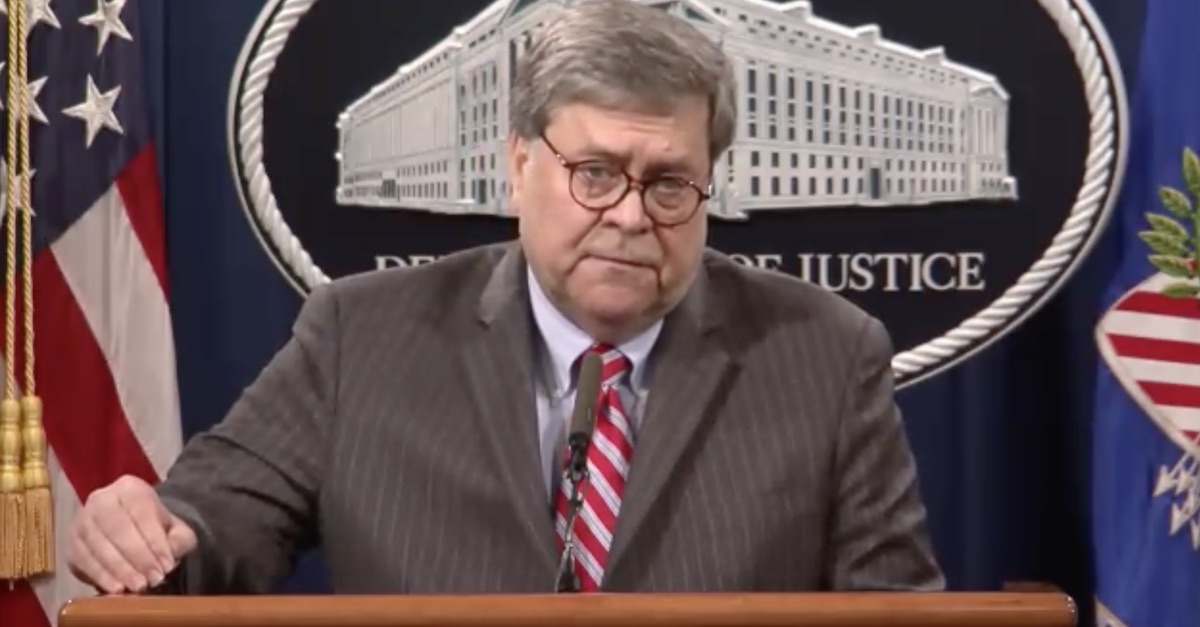 The Department of Justice came out in defense of an Alabama law which requires all individual absentee ballots to include either an affidavit from a notary public or two adult witness signatures, saying it does not violate the Voting Rights Act (VRA).

The initial lawsuit, filed earlier this month by several voting advocacy groups in the U.S. District Court for the Northern District of Alabama, claimed that the witness requirement violated the First and Fourteenth Amendment by forcing voters to “choose between protecting their health or forfeiting their fundamental right” to vote. Plaintiffs also argued that the witness requirement violated Section 201 of the VRA, which prohibits enacting any “test or device” that requires voters to “prove his qualifications by the voucher” of another person.

The DOJ on Monday filed a Statement of Interest in the case contending that the Alabama law is does not violate the VRA’s bar against a voter being forced to “prove his qualifications by the voucher of registered voters or members of any other class.”

“[The Alabama law] merely mandates that two persons over age 18 confirm that they observed the voter’s signing of the affidavit on the ballot envelope,” and “does not attest to the validity of the statements made in the document itself,” the DOJ stated.

“In these respects, the witness requirement fundamentally differs from a voucher requirement, which mandates that a voter must proffer an individual who can independently establish the voter’s identity or qualifications. See, e.g., Ward, 349 F.2d at 799 (noting that registrar told black voters ‘that they would need two electors to identify them” and would not accept “any other form of identification’). Because the witness requirement is not a test or device whereby the absentee voter must “prove his qualifications” to register or vote via another’s voucher, it is not prohibited by Section 201.”

The DOJ said it had a “substantial interest in ensuring the proper interpretation and uniform enforcement of Section 201,” and did not weigh in on whether the Alabama law violates the First or Fourteenth Amendments of the U.S. Constitution.

The department’s submission came just one day after a federal court in South Carolina blocked the state’s witness requirement law from taking effect, reasoning that “the burdens placed upon [voters] by the Witness Requirement far outweigh the imprecise, and (as admitted by [state electoral officials] Defendants) ineffective, state interests of combating voter fraud and protecting voting integrity.”

In a statement accompanying the submission, the DOJ said the VRA was not meant to prohibit all election-related regulations.

“The Voting Rights Act outlaws certain practices that deprive Americans of the right to vote because of race and other protected traits. The Voting Rights Act does not outlaw all voting-related requirements enacted by the States,” said Assistant Attorney General for the DOJ’s Civil Rights Division Eric Dreiband. “Congress has entrusted the U.S. Department of Justice with enforcement of the Voting Rights Act and the other federal voting rights laws. These laws protect the right of Americans to vote for their preferred candidates. We will continue to enforce them fairly, including by explaining to courts the legal framework that governs challenges to the voting laws enacted by the States.”

Vanita Gupta, one of Dreiband’s predecessors who led the DOJ’s Civil Rights Division under President Barack Obama, didn’t seem to think the DOJ was motivated solely by protecting enforcement of the VRA.

[image via Department of Justice screengrab]