A defense attorney detailed in a Monday evening letter the extent of the legal peril that former Stormy Daniels attorney Michael Avenatti faces. The letter was only three pages long, but it said a lot.

Avenatti was taken into custody last week in California for allegedly violating his bail conditions. That happened at a disciplinary hearing before the California State Bar Court. This is the necessary context for understanding why attorney Scott A. Srebnick wrote a letter to Judge Paul Gardephe “concerning Mr. Avenatti’s prison conditions” in New York:

We write to inform the Court of Mr. Avenatti’s conditions as a pretrial detainee and to request that the Court inquire into his custody status and direct the Bureau of Prisons to consider his immediate removal to general population. Under Mr. Avenatti’s current conditions of confinement, we cannot effectively prepare for trial and Mr. Avenatti cannot meaningfully assist in his defense.

As the Court is aware, Mr. Avenatti was remanded into custody last week, at the request of the United States Attorney for the Central District of California, on the theory that Mr. Avenatti violated his bail conditions in the CDCA because of financial transactions that prompted the prosecutors there to claim that he was an ‘economic danger.’ There was no allegation that Mr. Avenatti was a risk of flight or that he posed a physical danger to anyone or to himself.

Avenatti faces a slew of federal charges coast to coast. He has denied all wrongdoing and says he expects to be fully exonerated.

Here’s what else we learned from the letter.

Srebnick asked the judge that Avenatti be moved to general population, “where he has the same ability to confer with counsel as other pretrial detainees.”

“While we understand that there may be hypersensitivity about Mr. Avenatti given the profile of the case, and recent issues at the institution, the situation is truly hampering our ability to prepare for trial,” Srebnick said, seemingly alluding to the Epstein death when mentioning “recent issues.”

They’re asking that Avenatti have access to a computer so he can review discovery, be allowed to meet with his lawyers, and have social call privileges other pretrial detainees get.

The judge has ordered the government to explain by 2 p.m. on Tuesday why the “current conditions of confinement are in place.” 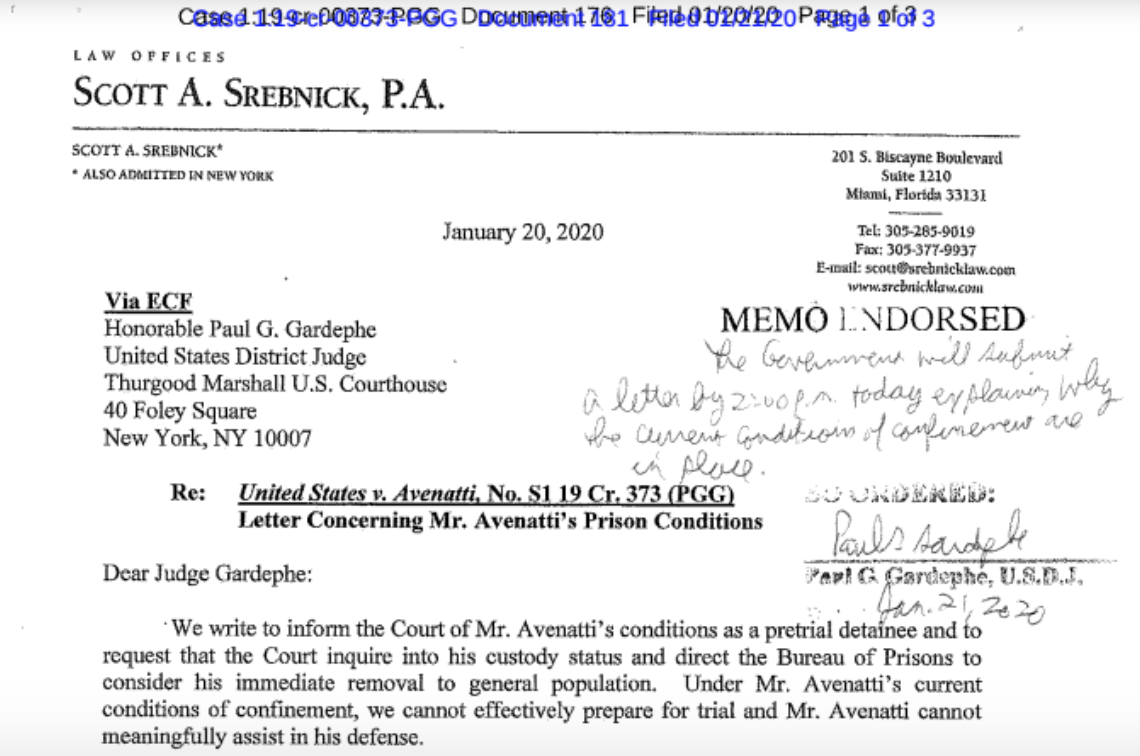 You can read the rest of the letter below.

Avenatti Letter by Law&Crime on Scribd