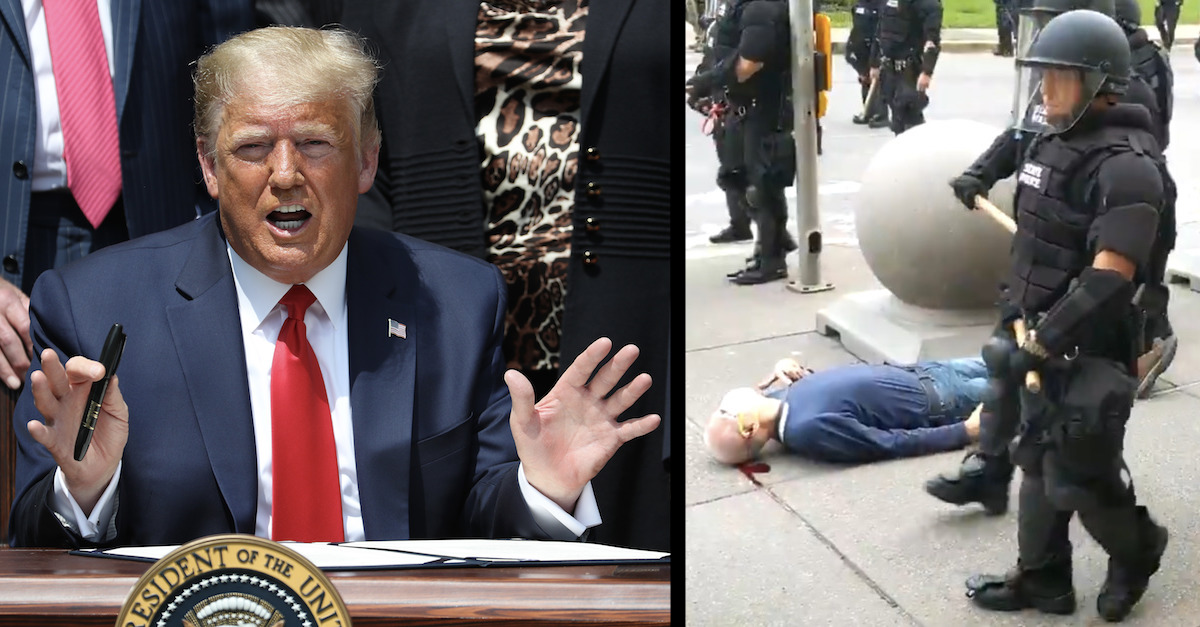 President Donald Trump tweeted on Tuesday about the 75-year-old protester in Buffalo, New York, who was seen on video being allegedly assaulted by two police officers whom he approached during a George Floyd protest. The protester, Martin Gugino, was seen on viral video bleeding from the head; prosecutors later charged two officers with shoving him. Despite this, the president said Gugino could be an “ANTIFA provocateur.” Gugino’s attorney told Law&Crime in a statement that this claim was “dark, dangerous, and untrue.”

“Buffalo protester shoved by Police could be an ANTIFA provocateur,” Trump tweeted. “75 year old Martin Gugino was pushed away after appearing to scan police communications in order to black out the equipment.”

“I watched, he fell harder than was pushed,” Trump continued. “Was aiming scanner. Could be a set up?”

Buffalo protester shoved by Police could be an ANTIFA provocateur. 75 year old Martin Gugino was pushed away after appearing to scan police communications in order to black out the equipment. @OANN I watched, he fell harder than was pushed. Was aiming scanner. Could be a set up?

Thank you for following up regarding the President’s Tweet about my client, Martin Gugino.  Martin is out of ICU but still hospitalized and truly needs to rest. Martin has always been a PEACEFUL protestor because he cares about today’s society.  He is also a typical Western New Yorker who loves his family.  No one from law enforcement has even suggested anything otherwise so we are at a loss to understand why the President of the United States would make such dark, dangerous, and untrue accusations against him.

NOW can we finally talk frankly as an nation about how diseased a mind the president of the United States has? https://t.co/8s1Qbc2MQm

Still rubbing eyes at this tweet. The guy was bleeding from is ears and was hospitalized. That was…faked? https://t.co/65J2KWbwKS

Others have peeled back the layers of where the theory — which Gugino’s lawyer says is untrue — originated.

Apparent information flow:
– Some people on the Internet →
– The website Conservative Treehouse →
– A Russian state media veteran now working for One America News Network →
– The president of the United States

The original article cited by OAN on the “Conservative Treehouse” website was written by an anonymous person who publishes under a pseudonym. The site is registered through a company that hides the identity and location of the owner of the website. https://t.co/eKL4kDr2d6

If you’re wondering why the reporter has a thick Russian accent it’s because he’s literally a Russian state media reporter who moonlights for OANN https://t.co/0tEYd3dXXT https://t.co/wIvmP0MYd8

The officers charged in connection with the incident, Aaron Torgalski and Robert McCabe, have pleaded not guilty.

[Image of Trump via Chip Somodevilla/Getty Images; image of protest via screen capture/WBFO.]