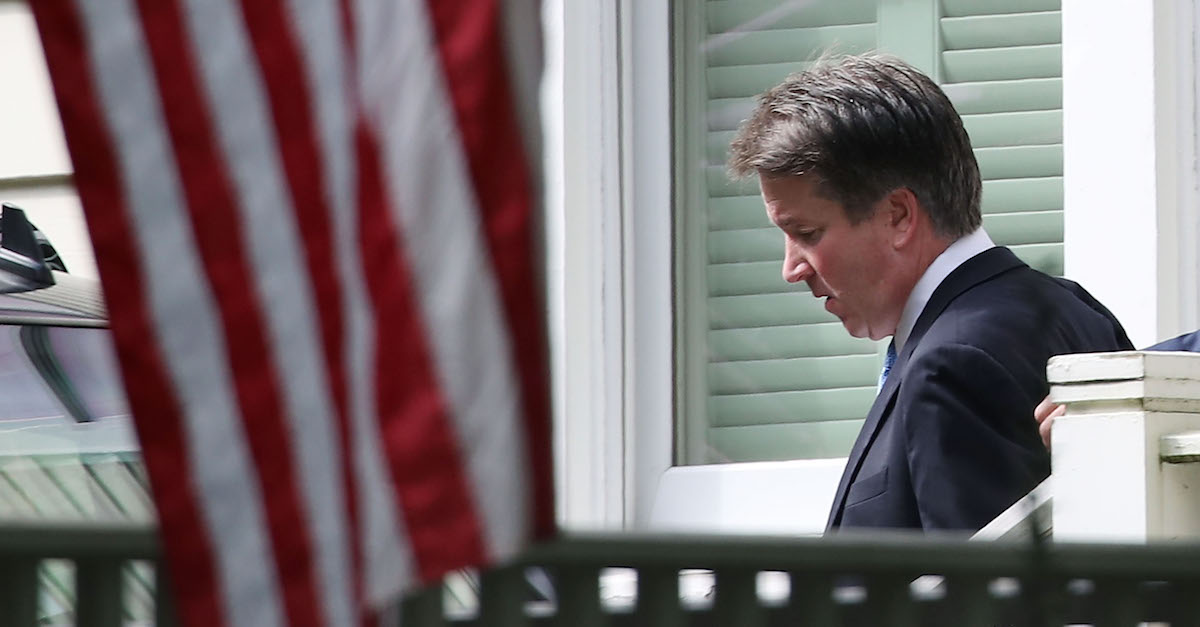 Dr. Christine Blasey Ford‘s lawyers Debra Katz and Lisa Banks released a statement Wednesday afternoon saying that they would “under no circumstances” honor a request by the Senate Judiciary Committee to review their client’s medical records. At the same time, they released the results of the polygraph test she took.

Dr. Ford, in case you somehow missed it, accused President Donald Trump‘s Supreme Court nominee Brett Kavanaugh of attempting to sexually assault back when they were in high school. In advance of Dr. Ford’s expected appearance Thursday on Capitol Hill, her legal team said the following:

“We will not produce copies of Dr. Christine Blasey Ford’s medical records. These records contain private, highly sensitive information that is not necessary for the Committee to assess the credibility of her testimony,” the lawyers began. “Our client has already been forced to compromise her privacy and safety in order to provide the Committee with important information about the nominee’s past conduct, and she will be available to answer any questions the Committee may have when she testifies tomorrow.”

“Any request that she pose her private medical records for public inspection represents an unacceptable invasion of privacy to which no reasonable person would consent,” they continued. “Under no circumstances will we grant any such request.”

She responded “no” to both questions.

The problem is, as Law&Crime has already reported, the results of the polygraph are the most meaningless proof of her truthfulness.

The U.S. Supreme Court has had something to say about the validity of polygraphs in the past. As Law&Crime’s Aaron Keller noted before in a different context, so-called “lie detector test results are largely considered inadmissible in court because the tests are not reliable. People can cheat them and, sometimes, the tests pick up false readings.”

[T]here is simply no consensus that polygraph evidence is reliable. To this day, the scientific community remains extremely polarized about the reliability of polygraph techniques.

National security lawyer Mark Zaid said at the time that whether Ford passed or failed the test is irrelevant because it “signifies nothing.”

He repeated this again Wednesday afternoon.

“I offer no opinion on Dr. Ford’s credibility or accuracy of her allegations but ‘favorable’ polygraph report means nothing,” he said. “No more so than ‘negative report. Hollywood myth that device detects truth. Horrible precedent for alleged victims to now face.”

I offer no opinion on Dr. Ford's credibility or accuracy of her allegations but "favorable" #polygraph report means nothing. No more so than "negative" report. Hollywood myth that device detects truth. Horrible precedent for alleged victims to now face.https://t.co/OMyGVbRMWY https://t.co/tXXVXqRkl6

Doesn't mean she's not telling the truth though.

Popular Science magazine chimed in on the subject as well.

Polygraph tests don't work as lie detectors and they never have https://t.co/TmOgXXkO62 pic.twitter.com/aD6Kdk2chF

At the top of the article Popular Science linked to is the declaration, “It’s time to stop pinning our hopes on pseudoscience.”

Thomas Mauriello, identified in the Fox News story as a University of Maryland criminology lecturer with a history of working as a senior polygraph examiner at the Department of Defense, said that the “result of a polygraph simply is whether you did or did not respond to a particular question. A response is not a lie, because the polygraph is not a lie detector as most think.”

“A response is the activation of your sympathetic nervous system when answering a question asked during the examination,” Mauriello said.

Mauriello also said it means “absolutely nothing” that Ford passed the test.

Zaid told Law&Crime before that calling the test a “lie detector test” is inaccurate and said the “existence of a ‘passed’ polygraph does nothing, scientifically or legally, to demonstrate an individual’s truthfulness.”

“Nor does the existence of a ‘failed’ polygraph evidence any lack of truthfulness,” Zaid added.

“The device is not a lie detector as it merely registers physiological responses,” he said. “What those physiological responses mean are then interpreted, or more precisely utilized by a skilled interrogator to extract an admission from an individual who likely believes Hollywood’s version that a polygraph, or Wonder Woman’s magic lasso, actually works in the manner it is portrayed.”

The American Psychological Association (APA) has also commented at length on the unreliability of polygraphs.

“The accuracy (i.e., validity) of polygraph testing has long been controversial. An underlying problem is theoretical: There is no evidence that any pattern of physiological reactions is unique to deception,” the APA says. “An honest person may be nervous when answering truthfully and a dishonest person may be non-anxious. Also, there are few good studies that validate the ability of polygraph procedures to detect deception.”

Ford went public with her allegation in an interview with the Washington Post, claiming that Kavanaugh attempted to sexually assault her at a high school party in the 80s and that she did not speak of this until 2012, during couples therapy. Ford said she decided it was her “civic responsibility” to come forward, and now a new hearing will take place. She also said Mark Judge, a classmate of Kavanaugh’s, witnessed it. Judge has denied that. Ford submitted sworn statements on Wednesday from four witnesses to support her claim.

As we’ve stated before, there are reasons to believe Ford’s account and reasons not to believe her. The polygraph has no bearing on either of those things.