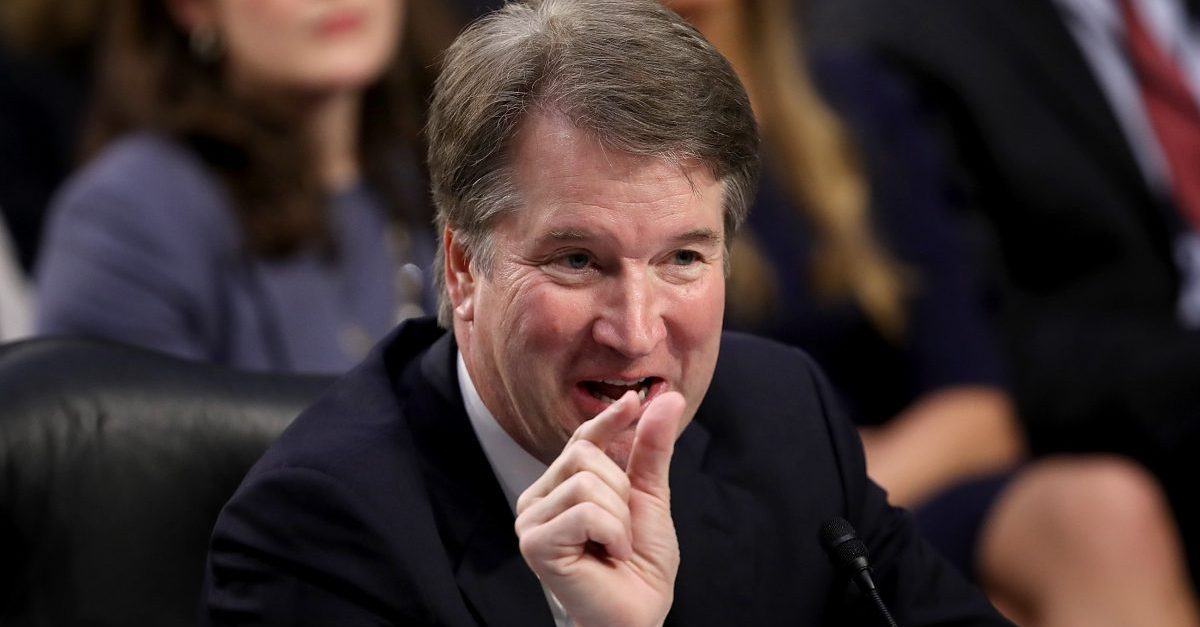 Mark Judge, the man professor Christine Blasey Ford says was in the room when Supreme Court nominee Brett Kavanaugh attempted to sexually assault her in high school, released a statement through his lawyer Tuesday afternoon, saying that he would not testify before the Senate Judiciary Committee. The problem is, he doesn’t really have a choice.

Judge sent a letter through his attorney Barbara Van Gelder to the Senate Judiciary Chairman Chuck Grassley (R-Iowa) and Sen. Dianne Feinstein (D-Calif.). Judge said that the only reason he is involved in this matter is that “Dr. Christine Blasey Ford remembers me as the other person in the room during the alleged assault.”

Whether or not Judge “wishes” to speak is separate from whether he will be forced to by Congress, says former federal prosecutor and CNN analyst Renato Mariotti.

Most people don't want to testify publicly. But unless Judge takes the Fifth, Congress can compel him to testify via subpoena. https://t.co/upmuGLs0m1

Even if he takes the Fifth, he could potentially receive immunity that would set aside his ability to take the Fifth.

“Most people don’t want to testify publicly. But unless Judge takes the Fifth, Congress can compel him to testify via subpoena,” he said, adding that if Judge did exercise his Fifth Amendment right he could “potentially receive immunity that would set aside his ability to take the Fifth.”

All of this is to say that if Judge, the named lone witness to an alleged assault from decades ago, thinks he can just say he doesn’t want to testify and Congress will be satisfied he may need to think again.

Kavanaugh and Ford are expected to appear at a Senate Judiciary Committee hearing on Monday to testify. The fact that the one person who Ford says witnessed the attempted assault said he had no plans of attending the Capitol Hill hearing is newsworthy.

As Law&Crime noted before, NBC News legal analyst and former federal prosecutor Daniel S. Goldman went so far as to say that without Judge’s testimony the hearing would be a “sham.”

After the Judge statement, many called for Judge to be subpoenaed or pointed out that he could be.

It appears that Mark Judge says he won’t voluntarily testify under oath. If that’s true, the Senate Judiciary Committee must subpoena him. He has no criminal exposure (unless he has lied to the FBI), so he can’t take the 5th.

NOTE: The Senate has the power to subpoena Mark Judge, rending his unwillingness to testify MOOT.

What is Mark Judge hiding? And if the GOP doesn't subpoena Mark Judge, what are they hiding? https://t.co/BoCnNHdHRd

Kavanaugh has denied the allegations against him, while Ford has stated through her attorney Debra Katz that she is willing to testify publicly before the Senate Judiciary Committee regarding her allegations. Now Judge says he doesn’t remember it and won’t testify.

The Senate will more than likely feel differently about that.

Over the weekend, Ford went public with her allegation in an interview with the Washington Post, claiming that Kavanaugh attempted to sexually assault her at a party in the 80s and that she did not speak of this until 2012, during couples therapy. Ford said she decided it was her “civic responsibility” to come forward, and now a new hearing will take place. She also said Mark Judge witnessed it.

Ford’s husband Russell said that he recalled her mention of Kavanaugh by name.

Kavanaugh has denied the allegations.

“I have never done anything like what the accuser describes — to her or to anyone,” Kavanaugh said on Monday. “Because this never happened, I had no idea who was making this accusation until she identified herself yesterday. I am willing to talk to the Senate Judiciary Committee in any way the committee deems appropriate to refute this false allegation, from 36 years ago, and defend my integrity.”