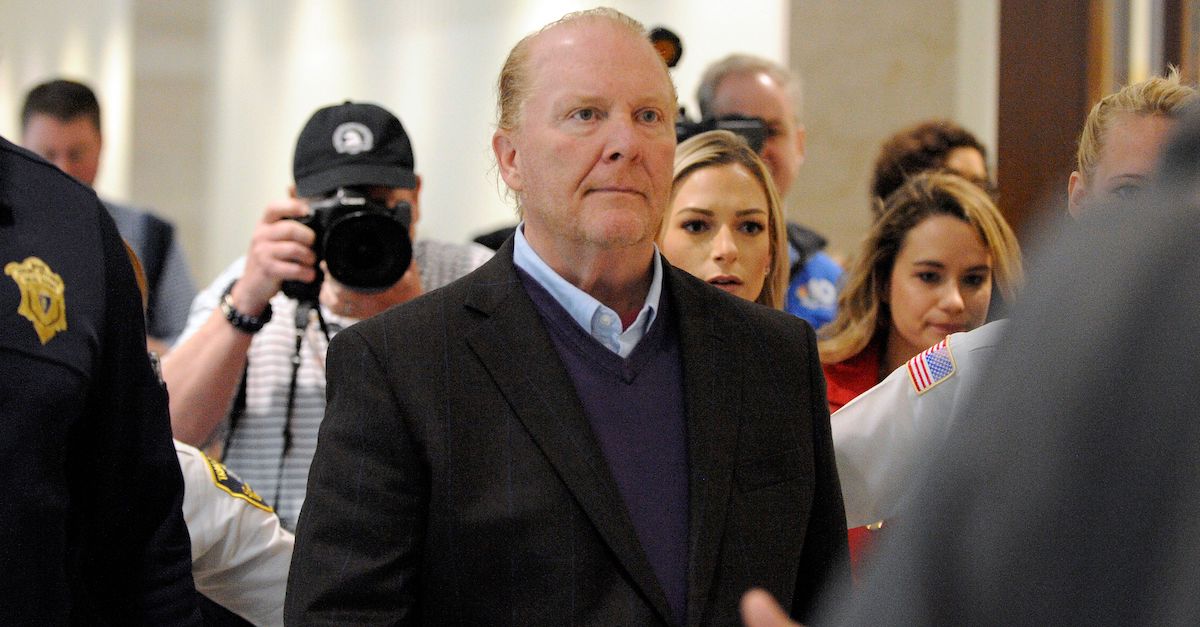 After two decades as business partners, Batali and Bastianich split in 2019, with Batali giving up his financial stakes in all of his restaurants. This was well after Batali had been publicly accused of sexual harassment but before he was criminally charged for allegedly groping a woman without her consent. In 2017, former Food Network star Batali admitted that he “mistreated and hurt” women who had accused him of misconduct over a 20-year period.

“I apologize to the people I have mistreated and hurt. Although the identities of most of the individuals mentioned in these stories have not been revealed to me, much of the behavior described does, in fact, match up with ways I have acted. That behavior was wrong and there are no excuses. I take full responsibility and am deeply sorry for any pain, humiliation or discomfort I have caused to my peers, employees, customers, friends and family,” he said at the time.

On Friday, two women who worked at the now-shuttered B&B restaurant Del Posto described a workplace environment where sexual harassment of female employees was “constant” and allowed to continue without consequences.

Juliana Imperati, a former line cook, said “[w]hen my female coworkers and I were being sexually harassed by multiple people at Del Posto, the restaurant’s leadership made us feel as if we were asking for it — as if it is a rite of passage to be harassed at work.”

“Sexual harassment, discrimination, and retaliation should never be normalized in any industry or workplace. This settlement is an important step in holding the powerful accountable, and I thank Attorney General James for continuing to right the wrongs done to countless workers in the restaurant industry every single day,” she said.

Brianna Pintens, a former server at the restaurant, said that the harassment was constant, “escalating,” and ruined her career goals and dreams.

“Throughout the course of my employment at Del Posto, I endured constant, escalating sexual harassment,” she said. “Management routinely ignored these behaviors, made excuses for the perpetrators, and often used victim blaming as a way to avoid having to deal with a workplace culture rooted in fear and humiliation. While I can’t speak for the countless other victims who faced ongoing harassment and discrimination, I can say that my time working for B&B permanently tarnished my goals and passions for hospitality. I have immense gratitude for the Attorney General’s Office for believing us, taking us seriously, and giving hope that this industry is on its way to healing and repairing a deeply flawed history.”

The attorney general’s press release said that male employees were harassed as well.

Today’s agreement was the culmination of a four-year investigation into allegations against Batali and Bastianich both individually as employers and on behalf of B&B and their restaurants. More than 20 employees were subjected to a hostile work environment in which female and male employees were sexually harassed by Batali, restaurant managers, and other coworkers. Between 2016 to 2019, multiple employees witnessed or personally experienced unwanted sexual advances, inappropriate touching, and sexually explicit comments from managers and coworkers, and several female employees were forcibly groped, hugged, and/or kissed by male colleagues. Batali himself sexually harassed a female server by making explicit comments to her and grabbing her hand while she was serving him and pulling it towards his crotch. On another occasion, Batali showed a male server at Lupa an unwelcome pornographic video.

The attorney general said in statement that celebrities are not above the law.

“Celebrity and fame does not absolve someone from following the law. Sexual harassment is unacceptable for anyone, anywhere — no matter how powerful the perpetrator,” AG James said. “Batali and Bastianich permitted an intolerable work environment and allowed shameful behavior that is inappropriate in any setting. Every individual deserves to work in a safe environment, and today’s agreement marks one more step towards remedying workplace harassment. I thank the men and women who reported this abhorrent behavior for their bravery, selflessness, and commitment to accountability.”