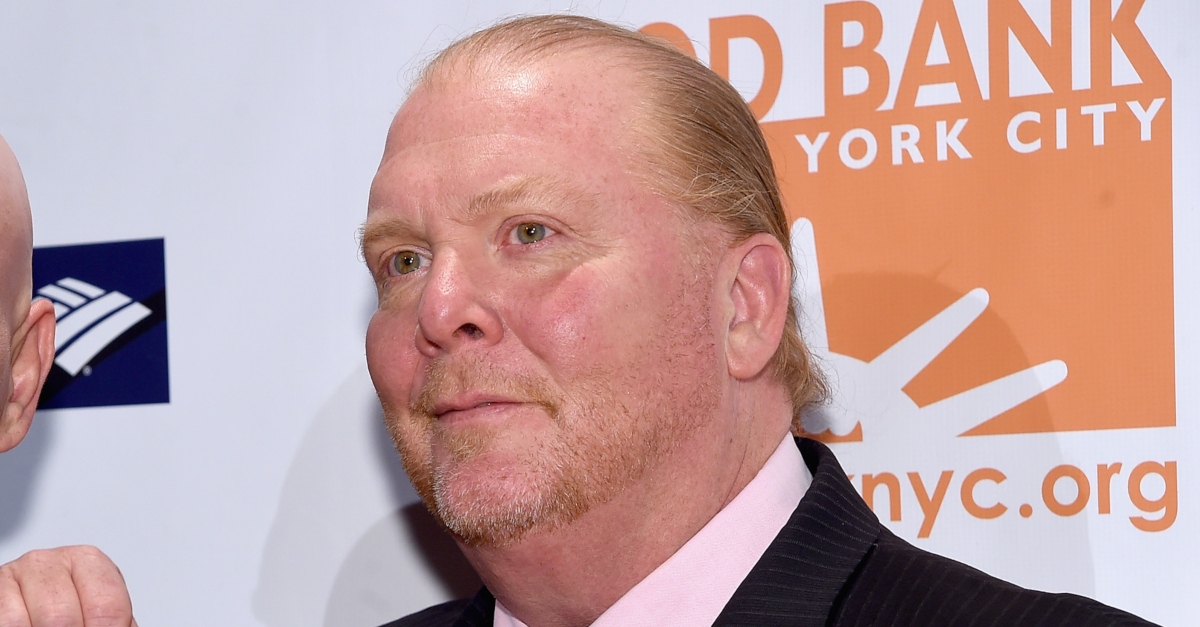 Chef Mario Batali, once known for his Food Network appearances, has been charged for allegedly groping a woman without consent. Here’s what we know about the new criminal case, and the other long-running sexual misconduct allegations against the disgraced, celebrity gourmet.

Police claim the 58-year-old chef kissed and groped a woman at a restaurant in 2017, according to The Boston Globe. Batali is charged with indecent assault and battery. He is set to be arraigned on Friday. If convicted, he Batali spend 2.5 years in prison. He would have to register as a sex offender.

The alleged victim’s name was redacted from court records, but several outlets have noted that the details match up with a lawsuit filed in August by a Massachusetts woman.

Batali’s defense attorney Anthony Fuller said it was the same woman. He denied the allegation.

“The charges, brought by the same individual without any new basis, are without merit,” Fuller told the Globe. “He intends to fight the allegations vigorously and we expect the outcome to fully vindicate Mr. Batali.”

The woman sued Batali in August 2018. She claimed that he caught her taking a photo of him at the Towne Stove and Spirits restaurant. She said Batali invited her over for a selfie, but that he then began kissing her face. She also said Batali groped her breasts, rear and groin.

Attorneys for the woman told Boston.com that she reported this incident to the Boston Police Department on June 22, 2018.

First there was that Eater report in December 2017. It showed that four women claimed the chef groped them. Three of them had worked for him. He didn’t deny the claims.

“I apologize to the people I have mistreated and hurt. Although the identities of most of the individuals mentioned in these stories have not been revealed to me, much of the behavior described does, in fact, match up with ways I have acted. That behavior was wrong and there are no excuses,” he said in a statement to the outlet. “I take full responsibility and am deeply sorry for any pain, humiliation or discomfort I have caused to my peers, employees, customers, friends and family.”

Batali has long been poised to face legal problems from different angles. After all, he was implicated in the downfall of The Spotted Pig, a formerly popular New York City restaurant. It was alleged that he had groped and kissed an unconscious woman at a 2008 party. This allegedly happened in a V.I.P. room that was so infamous employees called it the “rape room,” according to a New York Times profile.

“Though I don’t remember these specific accounts, there is no question I have behaved terribly,” he wrote the Times in an email. “There are no excuses. I take full responsibility and am deeply sorry for any pain, humiliation or discomfort I have caused.”

NYPD closed two unrelated sexual misconduct cases in January after they were not able to develop probable cause.

The misconduct allegations ended Batali’s restaurant work. He is now divested from his restaurants.