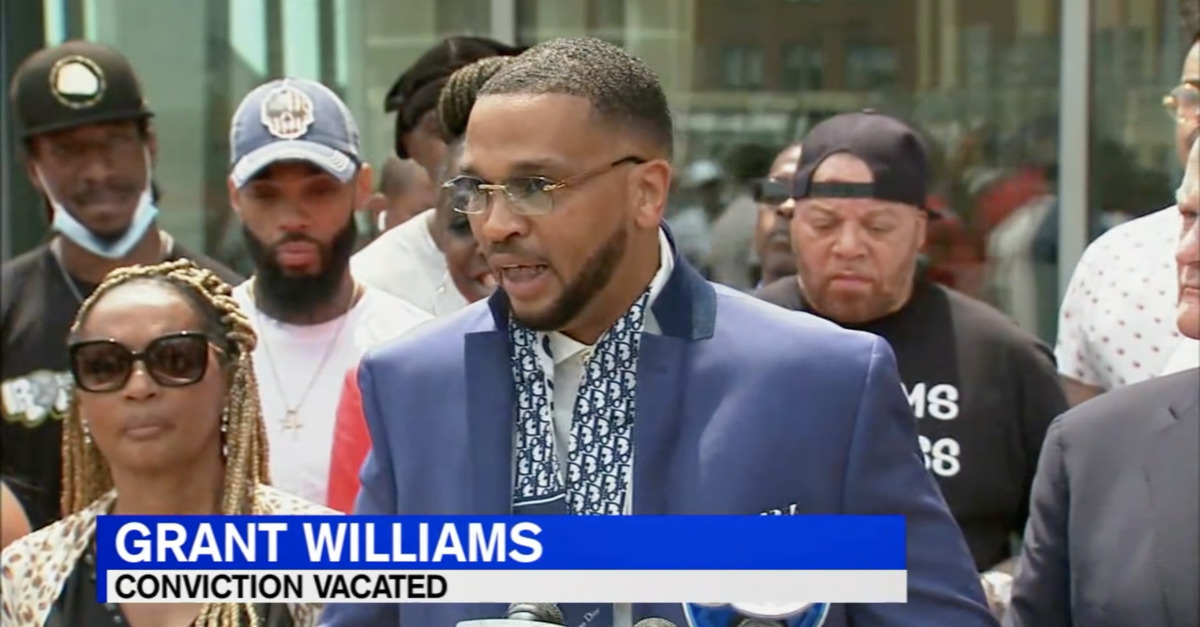 Grant Williams was arrested by the NYPD. He was charged and prosecuted by the Richmond County District Attorney. A Staten Island jury convicted him of murder. And he spent 23 years in prison. All for a crime he didn’t commit. On Thursday, his conviction was vacated.

After a recent inquiry into the 1996 murder of Shdell Lewis by the Conviction Integrity Review Unit, DA Michael McMahon vacated the faulty conviction. Williams has been out on parole since 2019.

Behind bars, he was prescient about the eventual outcome.

“I used to tell everybody in prison, I’m innocent,” the now-formally innocent man told New York City ABC affiliate WABC. “And they said, ‘Ahhh, Williams, everybody says that.’ I said, ‘I’m telling you the truth. One day you’re going to see me on the news, and you’re going to see that I was innocent.’ And today is that day.”

Integral to the government about-face was the latent admission that myriad credible witnesses testified to Williams’s innocence.

“Thirteen witnesses we developed in total that were in his favor,” Assistant DA Wanda DeOliveira told the television station. “Even an alibi witness, and a confirmation on the alibi as well.”

Also important to the sentence being vacated was the discovery that Williams was originally identified as the suspect by procedures that are not in line with modern investigatory techniques. Those methods, the new DA said, were not sufficient to provide fair and impartial justice.

“A reinvestigation of this case by my office’s Conviction Integrity Review Unit uncovered new evidence showing Mr. Grant Williams could not have committed the murder a Staten Island jury convicted him of carrying out in 1997,” McMahon said. “Given the overwhelming amount of exculpatory evidence presented for the first time in this review, as well as a totality of the investigative circumstances in this case, which in several instances defy what we now accept as best practices, we now believe Mr. Williams to actually be innocent and conclude that our justice system failed him. Accordingly, we are consenting to the vacating of his conviction and the dismissal of the case.”

In May 2017, the long road to freedom and vindication began when Williams’s attorney, Irving Cohen, requested a conviction review of the case by presenting new evidence that eventually put the lie to the original identification of his client as the shooter.

“I believe that once the police obtained an identification, they stopped investigating,” Cohen told WABC.

The miscarriage of justice is the first time that Staten Island officials have admitted fault in such a manner.

“This is Grant’s moment, I want to be very, very clear about that,” DA McMahon added. “But it’s also Staten Island’s moment, because this is the first time in the history of Staten Island’s criminal justice system that a lookback was taken and in-injustice was done.”

Williams, for his part, says he doesn’t harbor any ill will towards those who wronged him and hopes to spend the rest of his life helping others who were wrongfully convicted gain their own freedom.