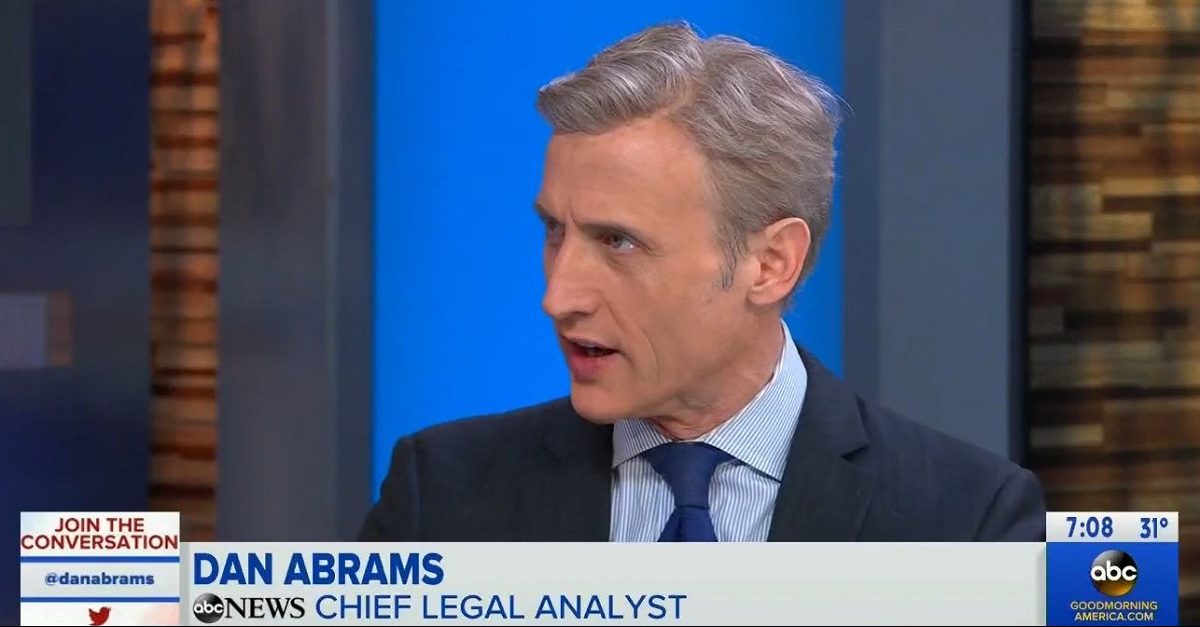 Attorneys for the Department of Justice and President Donald Trump‘s White House counsel had dueling takes–on the same day–about the importance of impeachment precedent, Law&Crime founder Dan Abrams pointed out Wednesday on his SiriusXM radio show.

“On the same day that the White House–that the [White House Counsel’s Office]–submits this letter demanding that Congress adhere to precedent–on the same day–the Department of Justice was in another courtroom arguing that impeachment precedent should be ignored,” Abrams noted Wednesday on The Dan Abrams Show.

You can listen an excerpt of the show below

A bit of backstory is necessary.

I write on behalf of President Donald J. Trump in response to your numerous, legally unsupported demands made as part of what you have labeled-contrary to the Constitution of the United States and all past bipartisan precedent-as an “impeachment inquiry.” As you know, you have designed and implemented your inquiry in a manner that violates fundamental fairness and constitutionally mandated due process.

Another passage bemoaned the process-like particulars presently being denied the White House [emphasis in original]:

[Y]ou have denied the President the right to cross-examine witnesses, to call witnesses, to receive transcripts of testimony, to have access to evidence, to have counsel present, and many other basic rights guaranteed to all Americans. You have conducted your proceedings in secret. You have violated civil liberties and the separation of powers by threatening Executive Branch officials, claiming that you will seek to punish those who exercise fundamental constitutional rights and prerogatives. All of this violates the Constitution, the rule of law, and every past precedent.

“[The] precedent for the rights to cross-examine witnesses, call witnesses, and present evidence dates back nearly 150 years,” the letter continues. “Yet the Committees have decided to deny the President these elementary rights and protections that form the basis of the American justice system and are protected by the Constitution.”

“The letter is in no way directed at collecting information in aid of legislation, and you simply cannot expect to rely on oversight authority to gather information for an unauthorized impeachment inquiry that conflicts with all historical precedent and rides roughshod over due process and the separation of powers,” the White House counsel wrote in the letter’s penultimate paragraph.

The point the White House makes throughout their Tuesday gauntlet thrown to Congress: abiding by prior precedent is good, valuable and necessary to comport with American ideals of justice and fair play.

The Department of Justice, however, dismissed the notion that precedent viz. impeachment matters at all. And this also happened on Tuesday.

“The Department of Justice was in federal court on Tuesday trying to block Congress from obtaining grand jury evidence obtained during [Robert] Mueller‘s investigation of the 2016 election,” Abrams noted. “Appearing before Beryl Howell, the chief judge United States district court for the District of Columbia, the DOJ argued at the court should ignore past precedent in deciding whether sealed grand jury evidence should be released to House investigators.”

Abrams went on, referring to a Washington Post write-up of the bold argument put before the federal judge, and noting the selective respect for precedent:

The government attorneys had asked the judge “to reject House Judiciary Committee request for Mueller’s grand jury materials” and they argued that the 1974 Court “wrongly gave congress the Watergate grand jury ‘roadmap’ that led to President Nixon’s impeachment.”