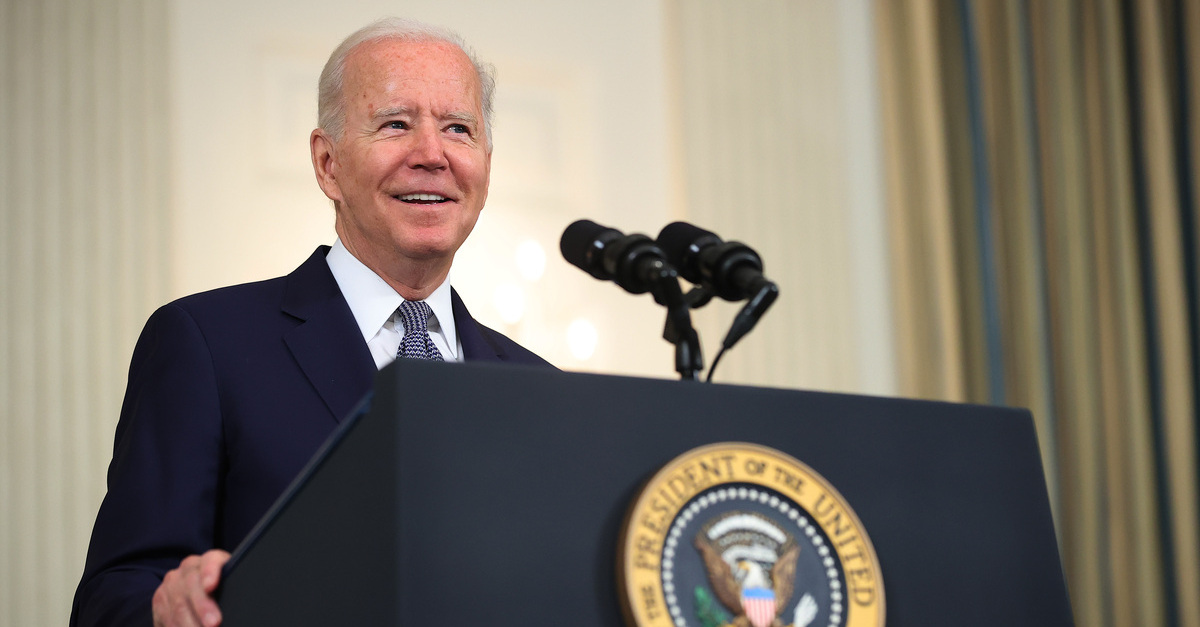 President Joe Biden issued an executive order on Friday that directs the U.S. Department of Justice and other relevant agencies to begin declassifying certain documents related to the 9/11 terror attacks.

The order requires Attorney General Merrick Garland “and the heads of any other executive departments and agencies” with “relevant information” to begin releasing those declassified documents over the course of the next six months.

Biden made the announcement just one day and one week before the 20th anniversary of the terrorist attacks–and styled the decision as his efforts to make good on a presidential campaign promise.

“When I ran for president, I made a commitment to ensuring transparency regarding the declassification of documents on the September 11, 2001 terrorist attacks on America,” a press release announcing the executive order notes. “As we approach the 20th anniversary of that tragic day, I am honoring that commitment.”

Many Americans continue to seek full accountability for the horrific attacks of September 11, 2001 (9/11), including 9/11 survivors and victims’ family members. As the 20th anniversary of 9/11 approaches, the American people deserve to have a fuller picture of what their Government knows about those attacks. Although the indiscriminate release of classified information could jeopardize the national security — including the United States Government’s efforts to protect against future acts of terrorism — information should not remain classified when the public interest in disclosure outweighs any damage to the national security that might reasonably be expected from disclosure. The significant events in question occurred two decades ago or longer, and they concern a tragic moment that continues to resonate in American history and in the lives of so many Americans. It is therefore critical to ensure that the United States Government maximizes transparency, relying on classification only when narrowly tailored and necessary. Thus, information collected and generated in the United States Government’s investigation of the 9/11 terrorist attacks should now be disclosed, except when the strongest possible reasons counsel otherwise.

Specifically, the order is related to the FBI’s “subfile investigation described in chapter V of the 2015 Report of the Congressionally-directed 9/11 Review Commission to the Director of the FBI” and the FBI’s “initial investigation of the 9/11 terrorist attacks — known as the Pentagon/Twin Towers Bombings (PENTTBOM) investigation.”

The executive order also points out that certain parts of the FBI’s subfile investigation were “identified but withheld in full during discovery” in several high-profile lawsuits against the Kingdom of Saudi Arabia. Those lawsuits were rolled together in litigation stylized as In re Terrorist Attacks on September 11, 2001, litigation currently playing out in a federal court blocks away from the World Trade Center.

The Saudi-specific information is also the first relevant document slated to be declassified and released–on Sept. 11, 2021.

Sixty days from now, “all other records that previously were withheld as classified, in full or in part, during discovery in In re Terrorist Attacks on September 11, 2001” must be released, the order says.

“Since the conclusion of the 9/11 Commission in 2004, much investigative evidence has been uncovered implicating Saudi government officials in supporting the attacks,” an organized group of 9/11 families recently told Biden, demanding that he stay away from their funerals until the documents are released. “Through multiple administrations, the Department of Justice and the FBI have actively sought to keep this information secret and prevent the American people from learning the full truth about the 9/11 attacks.”

No president, until Biden, had been receptive to those messages.

“We must never forget the enduring pain of the families and loved ones of the 2,977 innocent people who were killed during the worst terrorist attack on America in our history,” Biden’s Friday statement continued. “For them, it was not only a national and international tragedy. It was a personal devastation.”