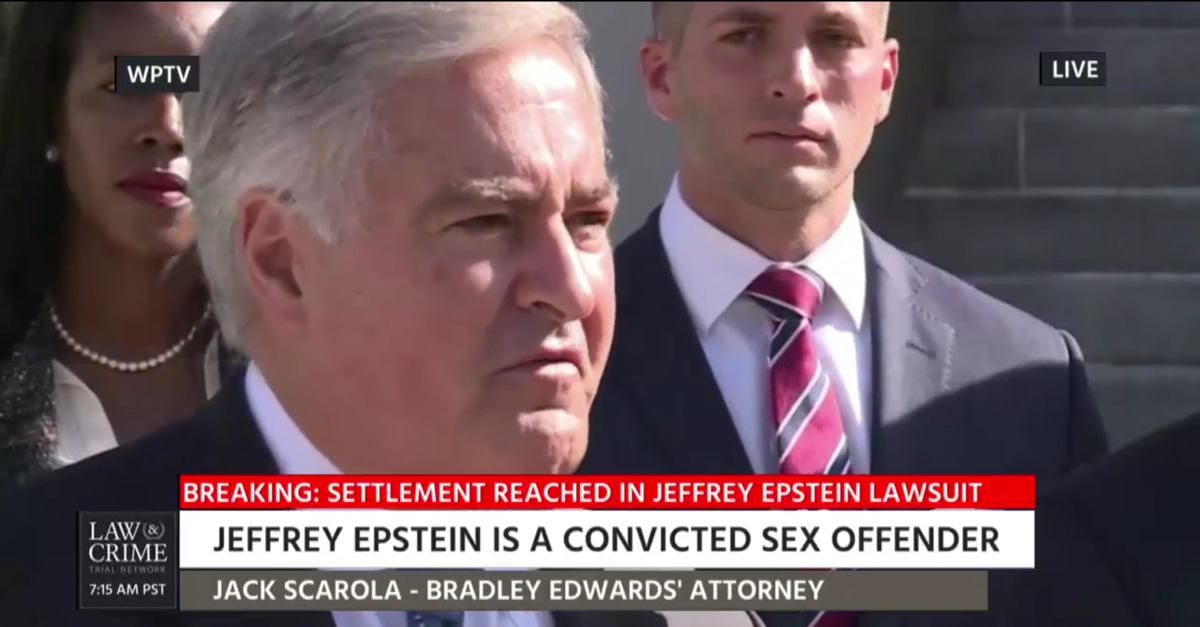 Billionaire pedophile Jeffrey Epstein has friends in very high places but an attorney working on the recently settled civil lawsuit against him believes that Epstein’s “sweetheart” deal that he made with prosecutors may eventually be set aside. More to the point, the feds may not have much of a choice.

Headlines blared Tuesday morning with news that Epstein would, once again, not be facing trial. While some observers have speculated that this settlement suggests an effort to retain the aura of silence around Epstein and his crimes, attorneys Bradley Edwards and Jack Scarola have cast the agreement as one step toward justice for the various survivors of the decade-old child sex operation.

During a press conference on Tuesday morning, Edwards thanked Miami Herald investigative reporter Julie Brown for her recent exposé on Epstein and the possibly untoward state of affairs that led to his lenient sentencing arrangement. Edwards also said that the attention from Brown’s work and the freshly-inked settlement agreement between himself and Epstein would all but force authorities into action.

“The focus of attention on this is going to make it more difficult for the government to want anything but an appropriate prosecution,” Edwards said, “Why is it that nobody–that no U.S. Attorney’s office–has ever wanted to prosecute what looks like a very, very strong case against a very powerful political person?”

Epstein is infamous for allegedly running a vast underage sex-trafficking operation sometimes known as “The Lolita Express“–a reference to a private plane owned by Epstein where in excess of 40 underage girls were reportedly forced to have sex with powerful men.

In 2007, federal prosecutors entered into a secretive non-prosecution agreement which unconventionally immunized Epstein along with his named and unnamed alleged co-conspirators. In return, the well-connected billionaire pleaded guilty to state prostitution charges in Florida and served a slap-on-the-wrist sentence of 13 months via prison and home detention for solicitation and procurement of minors for prostitution.

“There is no precedent for a non-prosecution agreement like this,” Scarola noted at the Monday morning press conference. “I am completely unaware of any non-prosecution agreement extending immunity to unnamed co-conspirators for unidentified crimes. I am entirely unaware of secrecy having been bargained for in violation of the Crime Victims Rights Act.”

Edwards later began to investigate Epstein on behalf of several clients who claimed to have been victims of the child sex trafficking ring. This investigation, according to a statement from Epstein himself, was “highly effective and therefore troublesome.” In turn, Epstein admittedly went after Edwards by maliciously filing a lawsuit against him and lying about the attorney’s reputation.

Edwards filed a countersuit against Epstein and the trial was slated to begin later this week. At the last minute, however, Epstein and Edwards reached a settlement in the civil case. For a run-down on this recent development see Law&Crime’s previous reporting here.

Scarola served as Edwards’ attorney during the civil action. During the same aforementioned press conference, Scarola outlined the difficulties and developments going forward.

“We are dealing, in Florida, with a restrictive statute of limitations,” Scarola noted. “It would be very difficult at this point, if not impossible, to bring criminal charges arising out of conduct that occurred more than a decade ago. There are jurisdictions where that problem is not faced, but Florida is a jurisdiction where we face statute of limitations concerns. However, there very well could be the possibility of prosecution at the federal level based upon the illegal plea bargain that was entered into.”

Far from a prediction of gloom-and-doom, however, Scarola remained optimistic about the potential for revoking Epstein’s plea agreement. He said:

One of the things that encourages us about the possibility of setting aside this plea bargain is that it was indeed Jeffrey Epstein and his dream team of high-powered, high-priced lawyers who insisted upon the secrecy positions in violation of the Crime Victims Rights ActThat puts Epstein in a position where it becomes difficult, if not impossible, for him to argue “I want to enforce a contract that I required have provisions that were violative of the Crime Victims Rights Act included in the contract.” The contract was illegal from the outset. He knew it was illegal from the outset. It needs to be set aside.

Jeffrey Epstein is not an unintelligent person. It would take a fool not to recognize that he faces extremely serious jeopardy at this point. He faces the distinct possibility that his sweetheart plea bargain can get set aside and that he and others will face federal criminal prosecution.

Scarola then favorably remarked upon Democratic Party efforts to suss out the series of events that led to the generous non-prosecution agreement offered to Epstein and his alleged co-conspirators. For more on this aspect of the Epstein case, see Law&Crime’s reporting here.

Scarola also reiterated his opinion that Epstein’s original agreement was both unheard of and unlawful.

“I have never seen, I have never heard of, a plea bargain in which not only the prospective defendant but the defendant’s named and unnamed co-conspirators were granted blanket immunity for unnamed crimes,” the attorney said. “That just doesn’t happen. That’s inexcusable.”

There is no reasonable justification regardless of what kind of evidence Jeffrey Epstein may have been secretly providing to some other prosecuting authority. There is no justification for keeping this deal secret, for violating the Crime Victims Rights Act that affords victims an opportunity to be able to address the court before any plea bargain is approved by a judge. And there is absolutely no justification for the broad scope of immunity that was granted in this case.

[Image via screengrab via Law&Crime Network/WPTV]