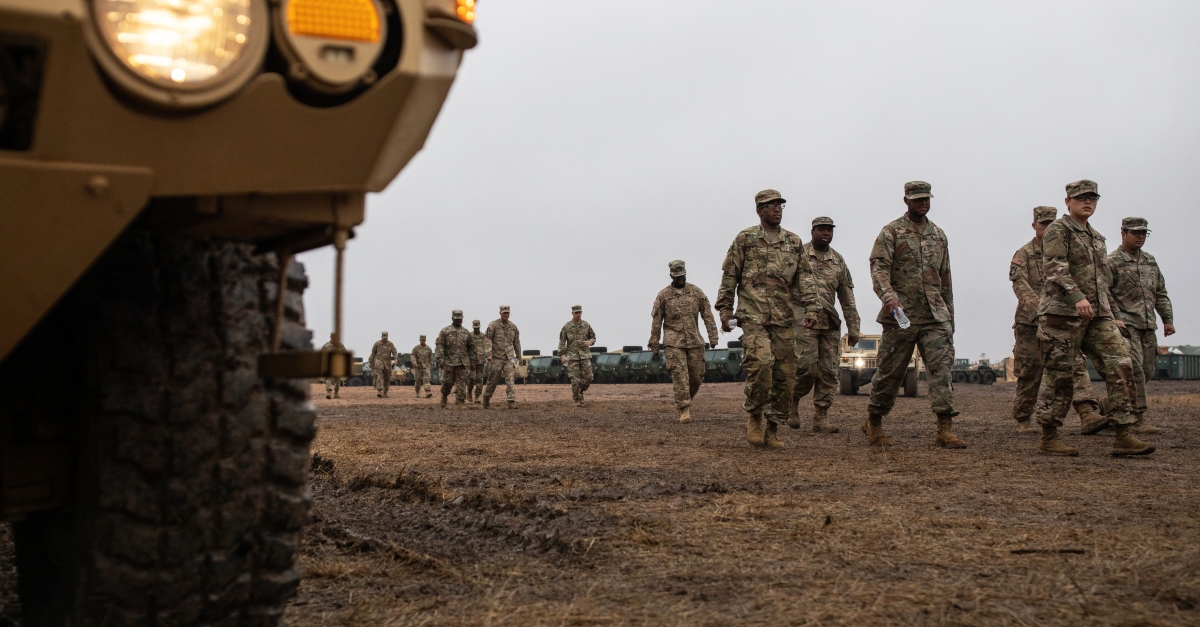 Within hours of President Donald Trump announcing that U.S. military forces would be deployed to the U.S.-Mexican border, Defense Secretary James Mattis clarified the military’s mission to reporters. “We are not doing law enforcement,” he told reporters. “We do not have arrest authority. … There is no arrest authority under Posse Comitatus for the U.S. federal troops. That can be done but it has to be done in accordance with the law.” What does the law allow?

On Nov. 20, the While House issued a “cabinet order” sending about 5,800 troops to the southern border to assist U.S. Customs and Border Protection agents to deter individuals seeking to enter the country illegally. Five days later in Tijuana, Mexico, south of California, the agents threw tear gas at around 500 migrants who tried to cross illegally, triggering an outcry of protest in the U.S. and Mexico. Military troops were not involved.

Still, the confrontation raises questions about the legal role of the military to quell such disturbances and spotlights the 1878 Posse Comitatus Act, a Reconstruction-era law that banned military forces from enforcing U.S. law.

Prior to the passage of the Posse Comitatus Act, presidents faced few limits on using U.S. troops to enforce U.S. law domestically, and many did deploy them. Perhaps the broadest campaign involving the military on U.S. soil was during the Civil War era, when Union troops became the primary form of law enforcement in the South.

The act, most recently amended in 1994, says, “Whoever, except in cases and under circumstances expressly authorized by the Constitution or Act of Congress, willfully (emphasis added) uses any part of the Army or the Air Force as a posse comitatus or otherwise to execute the laws shall be fined under this title or imprisoned not more than two years, or both.”

A lengthy Congressional Research Service study, updated in early November, provides a historical analysis of the use of the U.S. military to execute domestic law and of the Posse Comitatus Act, including theoretical and constitutional underpinnings. The study notes Americans have a tradition, born in England and developed in the early years of the nation, that abhors military involvement in civilian affairs, at least under ordinary circumstances.

Even so, the Posse Comitatus Act expressly allows military action to suppress insurrection or to enforce federal authority, and presidents have relied upon these exceptions. Then-President Dwight D. Eisenhower, for instance, used troops to force the city of Little Rock, Ark., to desegregate its schools in September 1957, after mobs prevented African-American students, known as the Little Rock Nine, from attending Little Rock Central High School. When the Arkansas Army National Guard refused to enforce the federal court order to integrate, Eisenhower sent the 101st Airborne Division to end the standoff.

Moreover, a host of U.S. laws under 10 U.S. Code, Chapter 15, gives a president broad authority to use the armed forces when necessary, although it limits the role that troops can undertake. Their arrest authority is limited, for example. The CRS study notes there has never been an officially reported prosecution since shortly after the act was passed 140 years ago, in part because of the standard set by the term “willfully” incorporated in the law. Also, in March the Department of Defense issued an updated working directive on use of military assets to support civil authorities.

That doesn’t mean that the Posse Comitatus Act has no modern-day use in court. In 2014, a three-judge panel of the U.S. 9th Circuit Court of Appeals overturned the conviction of a civilian on a federal pornography charge after a Naval Criminal Investigative Service (NCIS) probe that reached beyond the military found evidence of a civilian crime. The evidence was turned over to the FBI and led to a conviction. The judicial panel determined that the NCIS agent’s action constituted improper military enforcement of civilian laws, and that the evidence collected should have been suppressed. An en banc panel of the 9th Circuit subsequently reversed that decision, but on narrow grounds.

So, can the military today maneuver legally at the border? Secretary Mattis seems to have it right: Yes, but with limits consistent with the act.