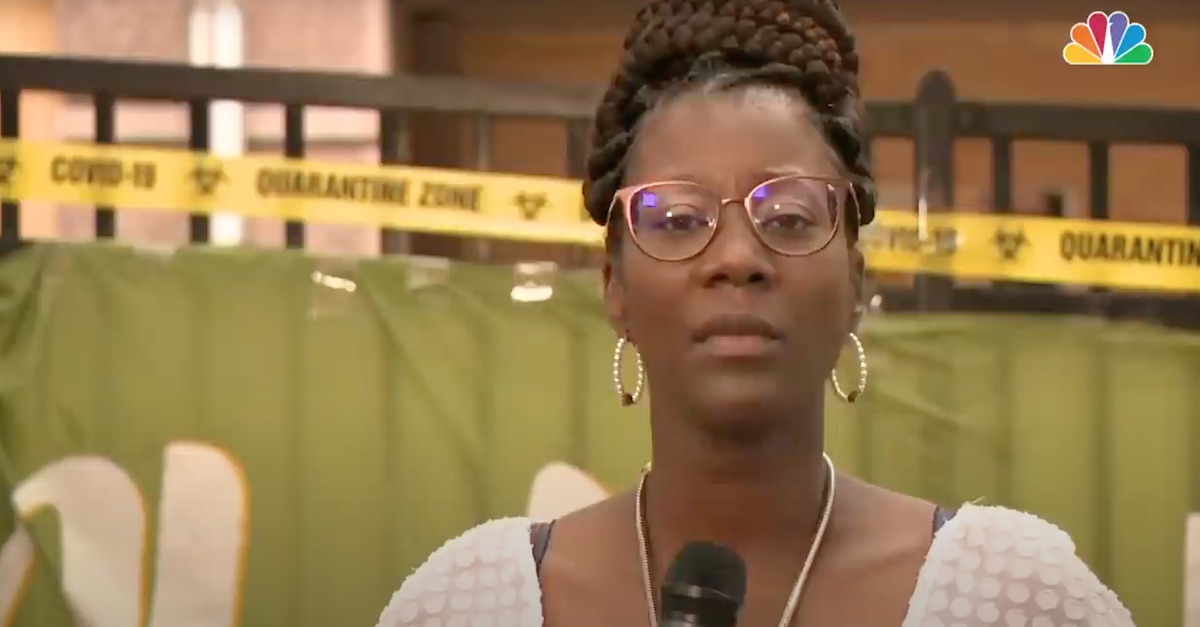 The Associated Press reported on Friday that more migrant women had come forward and alleged that they did not agree to or fully understand gynecological surgical procedures. But the AP also said that its review of the matter “did not find evidence of mass hysterectomies as alleged in a widely shared complaint filed” by Dawn Wooten, a nurse at the Irwin County Detention Center (ICDC) in Georgia.

In addition, per the AP [ensuing emphases ours] Priyanka Bhatt, a Project South lawyer involved in filing the complaint, said she included the mass hysterectomy allegations in the complaint to trigger an investigation of the claims:

Members of Congress and groups representing Wooten have demanded an investigation of the nurse’s claims about a “high rate” of hysterectomies on ICDC detainees. Those allegations in the whistleblower complaint were first noticed and reported by Law&Crime.

Wooten is a nurse who formerly worked full-time at ICDC. She was demoted in July, she believes, out of retaliation for raising concerns about the facility’s “unsafe work practices” and life-threatening neglect of detainees amid the COVID-19 pandemic.

If the mass hysterectomies allegation doesn’t turn out to be true, does that mean there’s nothing to see here?

Andrew Free, an immigration lawyer involved in the investigation of procedures performed on ICDC detainees, told the AP that doctors are reviewing new records and claims by more women that are, so far, indicative of “a systemic lack of truly informed and legally valid consent to perform procedures that could ultimately result — intentionally or unintentionally — in sterilization.”

The AP cited two examples, in which the women were identified by name.

Fernandez unbuttoned her jail jumpsuit to show the scars on her abdomen. There were three small, circular marks.

The 39-year-old woman from Cuba was told only that she would undergo an operation to treat her ovarian cysts, but a month later, she’s still not sure what procedure she got. After Cardentey repeatedly requested her medical records to find out, Irwin County Detention Center gave her more than 100 pages showing a diagnosis of cysts but nothing from the day of the surgery.

“The only thing they told me was: ‘You’re going to go to sleep and when you wake up, we will have finished,’” Cardentey said this week in a phone interview.

In another case, Pauline Binam, a 30-year-old woman who was brought to the U.S. from Cameroon when she was 2, saw Amin after experiencing an irregular menstrual cycle and was told to have a D&C, said her attorney, Van Huynh.

When she woke up from the surgery, Huynh said, she was told Amin had removed one of her two fallopian tubes, which connect the uterus to the ovaries and are necessary to conceive a child. Binam’s medical records indicate that the doctor discovered the tube was swollen.

“She was shocked and sort of confronted him on that — that she hadn’t given her consent for him to proceed with that,” Huynh said. “The reply that he gave was they were in there anyway and found there was this problem.”

Doctors the AP spoke with said the removal of one of Binam’s fallopian tubes was likely unnecessary and, if the procedure happened as she claimed, was an “abhorrent” abuse of process.

“It’s established U.S. law that you don’t operate on everything that you find,” Dr. Julie Graves said. “If you’re in a teaching hospital and an attending physician does something like that, it’s a scandal and they are fired.”

The doctor referred to in the complaint, since identified as OB/GYN Mahendra Amin, told The Intercept he only performed “one or two hysterectomies in the past two [or] three years.”

Project South’s Legal & Advocacy Director Azadeh Shahshahani, who represents Wooten, called for ICDC to be “shut down immediately” on Thursday.

The Government Accountability Project is also representing Wooten. Law&Crime reached out to the group for comment on the AP’s reporting.

Wooten’s co-counsel Dana Gold, the Government Accountability Project’s Senior Counsel and Director of Education, said in statement to Law&Crime that the group has “heard from multiple attorneys representing numerous women who have suffered abuse.”

“It’s no small task to ask these women to speak out, just as it’s difficult to track down women who have already been deported, or are afraid to speak out due to the fear of retribution–both personal and professional,” Gold said. “What we know for certain is that Dawn is stepping forward and calling for a full investigation into all the issues she’s disclosed.”

The attorney said that investigations of this magnitude do not happen in one business week.

“She reported wrongdoing. She did her job as a whistleblower, and she looks forward to Congress, the Inspector General, and all other relevant offices conducting a fulsome investigation that interviews witnesses, reviews documents, and finds all the facts. A complete investigation into all of her disclosures takes much longer than a business week,” Gold said.