Alex Murdaugh, Convenience Store Sued by Boyfriend of Teen Killed in 2019 Boat Crash: They Turned a ‘Blind Eye Toward the Dangers’ 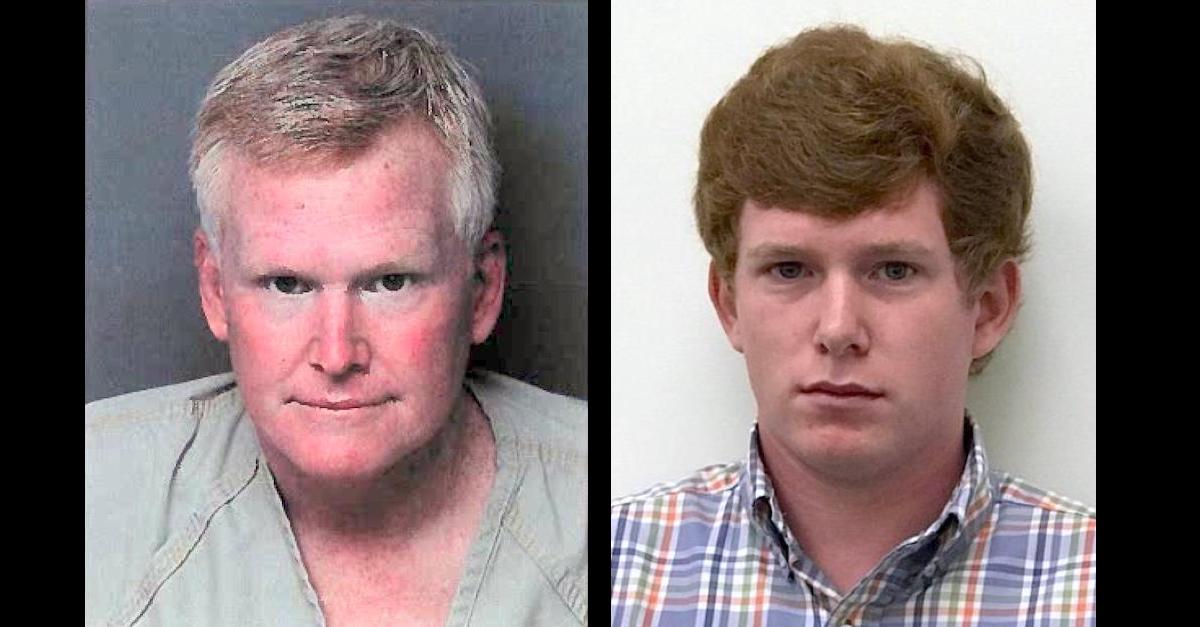 A passenger on a boat belonging to Alex Murdaugh has filed a lawsuit against the disgraced South Carolina lawyer and the owner of a chain of convenience stores, alleging they are both responsible for the fatal boat crash that injured him and killed a 19-year-old girl.

Keith Anthony Cook Jr. says he was the boyfriend of Mallory Beach, 19, on the night she died. Beach was killed in February 2019 when a boat allegedly piloted by Paul Murdaugh crashed into a piling near a narrow bridge in Archer’s Creek.

Cook, Beach, and five others were thrown from the boat, and Beach’s body wasn’t found until a week later. The five survivors were “grossly intoxicated,” according to police at the time, but none took sobriety tests. Audio from the night of the crash released in August reveals a distraught-sounding Cook cursing Murdaugh, accusing him of “smiling” during the aftermath as emergency responders were on the scene.

Cook is now suing Paul’s father, Alex Murdaugh, along with the store where Paul allegedly bought the alcohol before the crash and the employee who allegedly sold it.

Alex owned the boat involved in the crash and “knowingly and purposefully entrusted [the boat] to his son, Paul Murdaugh, under circumstances that he knew or should have known were unsafe and improper,” the complaint says.

Paul was not only drunk on the day of the crash, Cook claims, but he also had a “proclivity for underage drinking, [and] reckless and dangerous boating habits, all of which were known” to Alex. 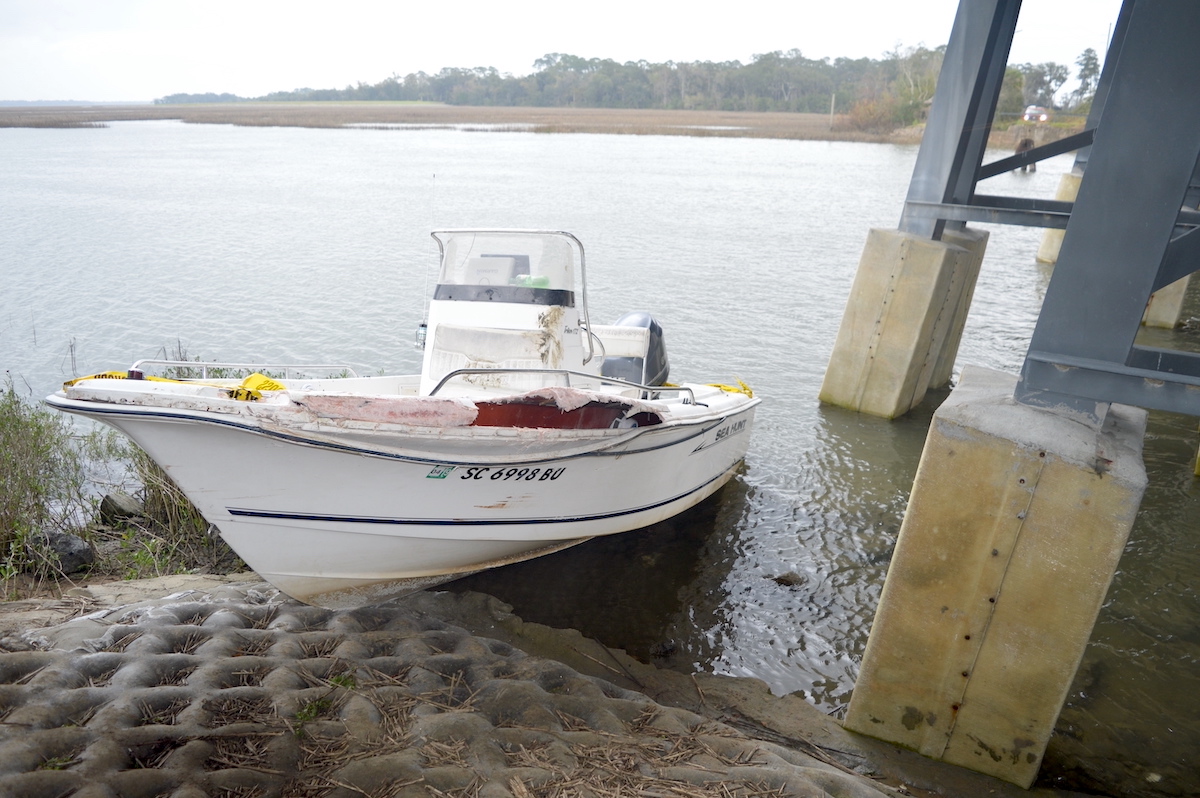 This image taken by a South Carolina coroner shows a boat owned by Alex Murdaugh and allegedly operated by Paul Murdaugh after it crashed into a bridge pier on Feb. 23, 2019. (Image obtained from the South Carolina Attorney General’s Office pursuant to a Freedom of Information Act request by Law&Crime.)

Cook also alleges that Alex “condoned repeatedly” Paul’s tendency to use the driver’s license of his older brother, Richard Alexander “Buster” Murdaugh, along with a debit card belonging to Paul’s mother and Alex’s wife Margaret “Maggie” Murdaugh, to make purchases.

“The use of this identification card of Paul’s brother, as well as the use of this credit card or debit card that obviously did not match the identification card of the purchaser, should have alerted the Defendants herein that an attempt at illegal alcohol sales was at hand, and any level of reasonable scrutiny engaged in by the Defendants herein would have led to the conclusion that this sale of alcohol should have been refused by Parker’s and Cohen,” Cook’s complaint says. 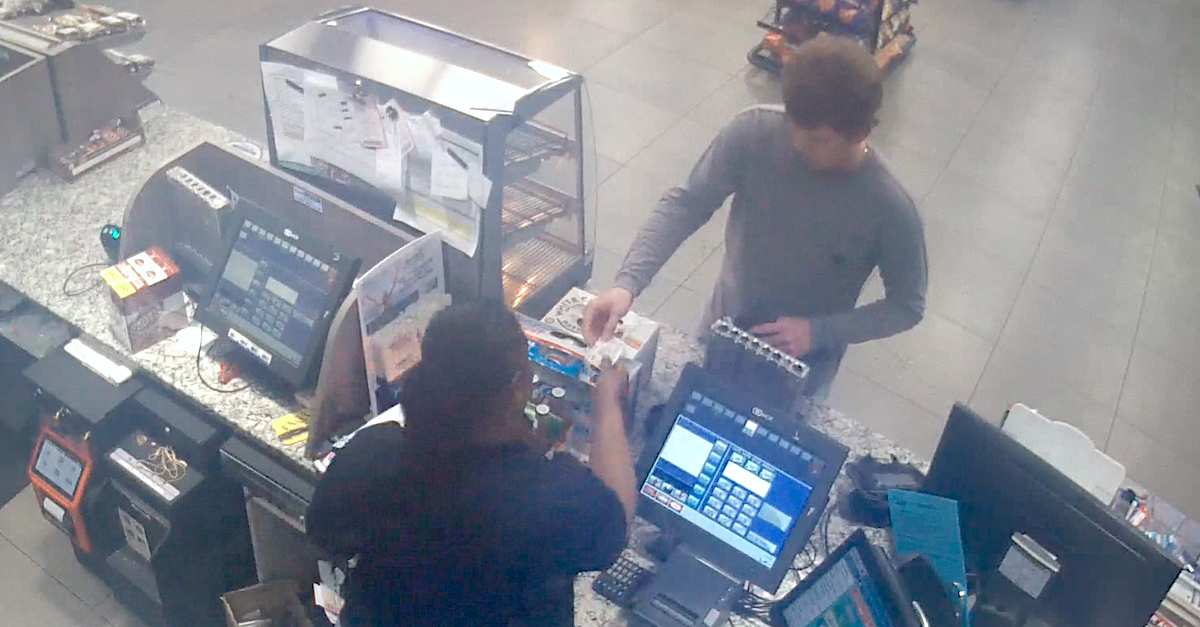 Paul Murdaugh was captured by a security camera at a Parker’s convenience store purchasing several packs of alcohol. He allegedly presented his older brother’s license to the cashier. (Image obtained from the South Carolina Attorney General’s Office pursuant to a Freedom of Information Act request by Law&Crime.)

Cook alleges that a Parker’s gas station and convenience store — and an employee named Tajeeha Cohen — sold the alcohol that Paul consumed before the boat crash. According to Cook, the defendant store placed profits ahead of safety.

“The emphasis placed on the speed of sales transactions by these Defendants is part of a deliberate corporate design that is grounded in a profit motive, and this emphasis on the speed of the sales transaction with Parker’s many convenience stores minimizes or eliminates the opportunity for proper examination of a customer’s eligibility to purchase alcohol, thereby placing the public at a large risk of harm,” the lawsuit says. 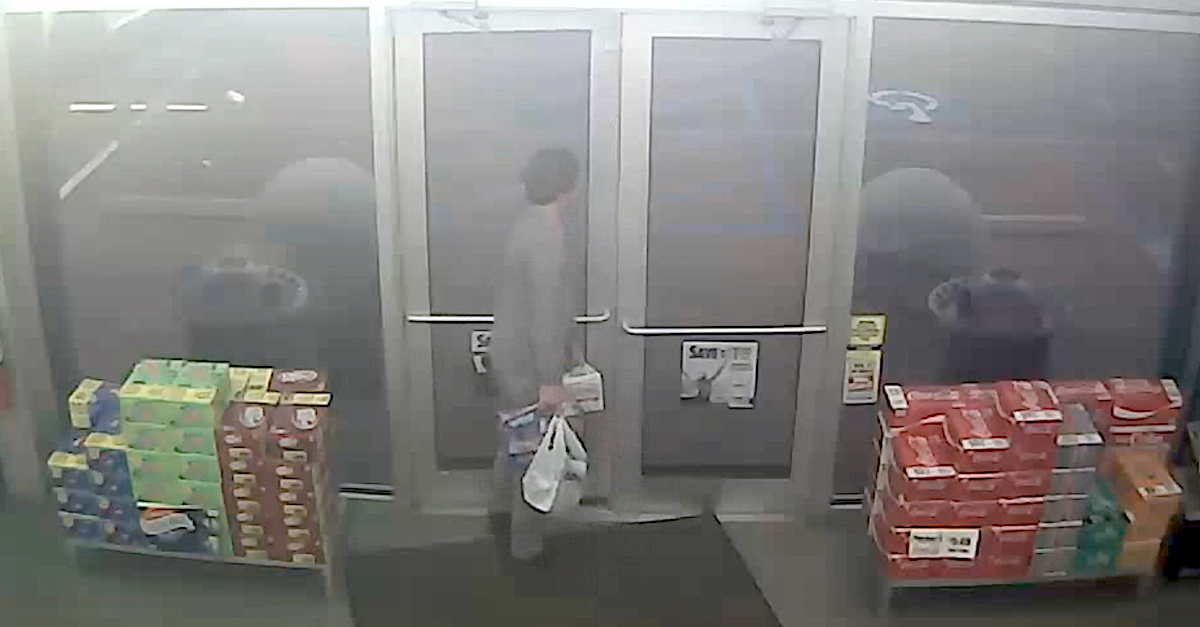 Paul Murdaugh was captured by a security camera leaving a Parker’s convenience store carrying several cases of alcohol prior to the boat crash which killed Mallory Beach. (Image obtained from the South Carolina Attorney General’s Office pursuant to a Freedom of Information Act request by Law&Crime.)

“Improper alcohol sales and turning a blind eye toward the dangers associated with underage consumption of alcoholic beverages are societal problems that cause many unnecessary injuries and deaths every year in the United States,” the complaint adds. 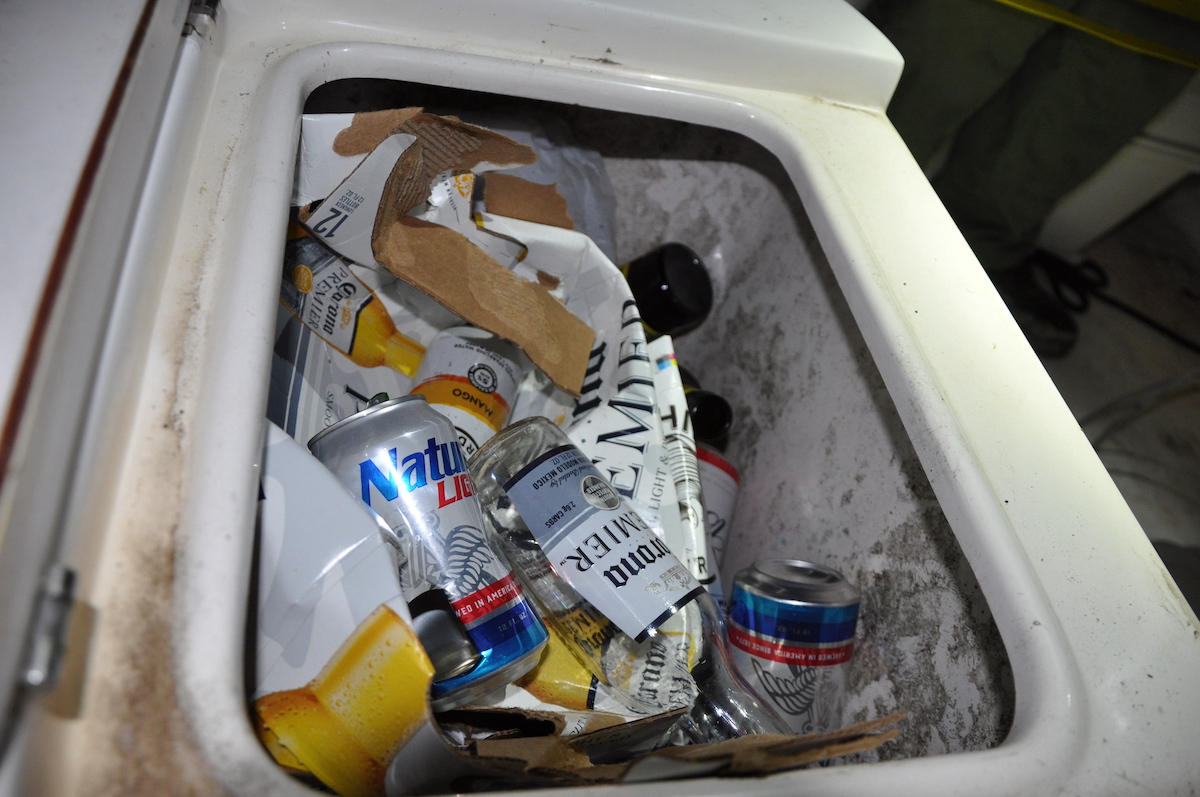 Investigators found copious quantities of beer and alcohol — in both open and unopened containers — after the crash of a boat owned by Alex Murdaugh. (Image obtained from the South Carolina Attorney General’s Office pursuant to a Freedom of Information Act request by Law&Crime.)

Paul had pleaded not guilty to felony boating under the influence. He was awaiting trial when he and Maggie were found shot to death in their home in June 2021. 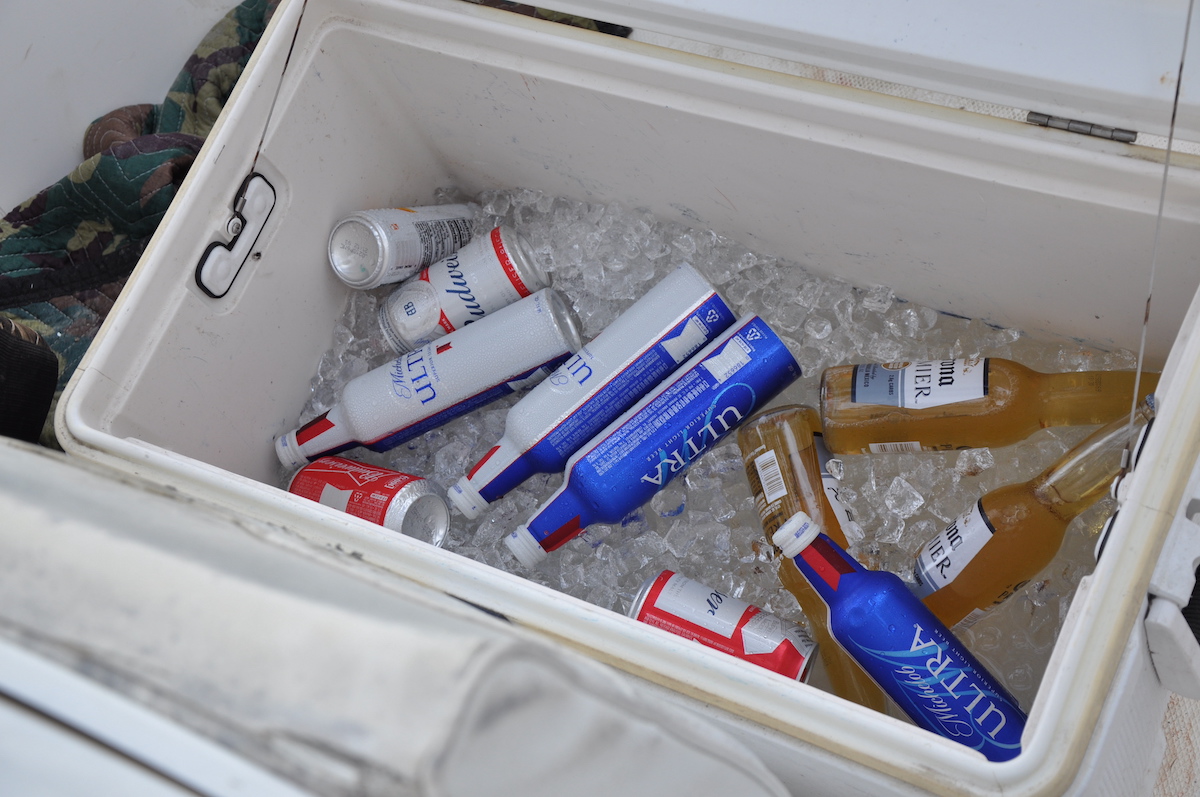 (Image obtained from the South Carolina Attorney General’s Office pursuant to a Freedom of Information Act request by Law&Crime.)

Their deaths shocked residents of Colleton County. The Murdaugh family were legal legends in the area, with a member of the family having held a top prosecutor position for almost a century.

In September, Alex resigned from his family’s law firm after it was alleged that he misappropriated funds. The next day, he was shot in the head. He survived, but went on to face charges that he hired a local man to kill him to trigger a $10 million life insurance payment to his son.

Alex was arrested again in October, this time on charges of falsely “obtaining property” connected to the death of his former housekeeper.

He has since claimed that he tested positive for barbiturates and opiates at the time of the shooting. He was recently denied bail for the second time and remains in custody in South Carolina.

A section of Murdaugh’s medical records — as provided by his attorneys via a public relations firm — indicates that a blood draw tested positive for two types of drugs.

Cook’s is the third civil lawsuit filed in relation to the boat crash. In 2019, Mallory’s mother, Rene Beach, filed a wrongful death lawsuit on behalf of Mallory’s estate, the Greenville News reported. Earlier this year, Connor Cook, another passenger on the boat and a relative of Anthony Cook, filed a lawsuit alleging civil conspiracy to shift the blame for the crash from Paul Murdaugh to himself, the Greenville News story said.