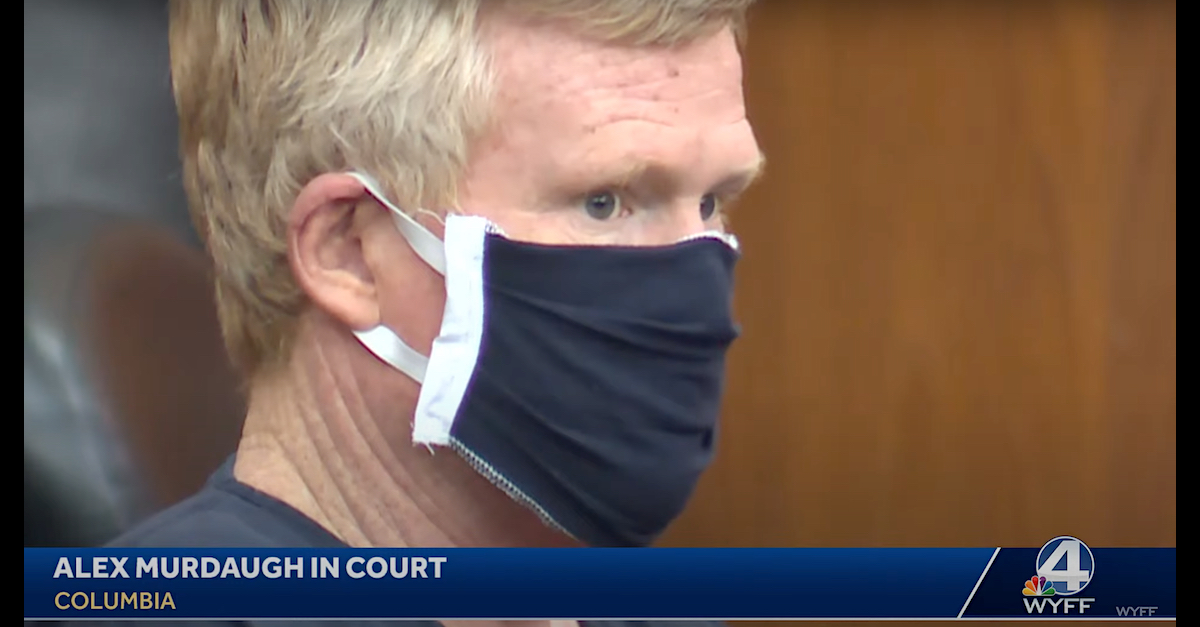 The increasingly sordid tale of disgraced attorney and legal scion Richard “Alex” Murdaugh took another negative, if somewhat to be expected, turn on Wednesday as the defendant was denied bail for the second time by a judge in South Carolina.

Bodies have piled up in the past few years around the locally famous family  — a legal dynasty going back a century in the Palmetto State’s Lowcountry region. Murdaugh himself recently allegedly attempted to add himself to that bodycount by arranging for his own death in order to secure a hefty life insurance payout for his last surviving son.

The prominent attorney and occasional prosecutor was arrested in mid-September and charged with filing a false police report of a felony, insurance fraud, and criminal conspiracy to commit insurance fraud for allegedly paying a former client to shoot him in the head and kill him. That former client has disclaimed any participation in the scheme and Murdaugh’s defense has insisted their client is innocent and actually a victim–while admitting that he did intend to die.

The defendant was granted bond on those South Carolina-based fraud charges. And then he went to Florida to a drug rehab facility. But not for very long.

In early October, Murdaugh was arrested and charged again over allegations that he “misappropriated settlement funds” related to the mysterious 2018 death of his former housekeeper, Gloria Satterfield, according to the South Carolina Law Enforcement Division.

“Mr. Murdaugh coordinated with Satterfield’s family to sue himself in order to seek an insurance settlement with the stated intent to give the proceeds to the Satterfield family to pay for funeral expenses and monetary compensation for Satterfield’s children,” the agency said–and instead allegedly pocketed some $3 million.

Around the same time, an investigation into the Satterfield’s death was reopened because the wealthy family never reported the “trip and fall accident” which occurred on their property. Police believe Satterfield’s fatal injuries were not consistent with her death certificate’s description: “Natural.”

On Oct. 19, Judge Clifton Newman denied requests from both prosecutors and the defendant’s attorneys for Murdaugh to be released on bond in the Satterfield case. Instead, the judge ordered a psychiatric evaluation to be provided for by the defense, with the judge reserving those bond requests after “further consideration.”

The results did not bode well for the defendant.

“After considering the arguments of counsel, the evaluation submitted, then pending charges and other investigations, and the apparent character and mental condition of the defendant, the Court finds that the Defendant is a danger both to himself and his community,” Newman wrote in the order denying bond.

“Since the original bond hearing Alex Murdaugh has taken financial actions which clearly show that he has no respect for the judicial process, legitimate creditors and victims of his criminal activities and that the ordinary rules do not apply to him,” attorneys Eric Bland and Ronnie Richter, who represent the Satterfield family, said in a statement.

Murdaugh will now remain detained in the Richland County Detention Center as he awaits trial on the numerous charges against him.

But the criminal case setback is just a small drop in a very large bucket of woe for the wealthy heir to a lucrative legal life in the Lowcountry.

National attention focused on the family last summer when Alex Murdaugh allegedly discovered his wife, Margaret “Maggie” Murdaugh, 52, and their son, Paul Murdaugh, 22, shot to death on the 1,770-acre hunting lodge that locals refer to as “Moselle.” Alex Murdaugh himself was recently confirmed to be a person of interest in that double homicide.

At the time of his death, Paul Murdaugh faced legal jeopardy in a Feb. 2019 boat crash that killed 19-year-old Mallory Beach. The younger Murdaugh was facing three criminal charges from that incident. The shocking discovery of Paul and Maggie Murdaugh shot to death — combined with the deaths of Beach and Satterfield, and Alex Murdaugh’s alleged botched suicide plot — contributed to suspicions in the region that the family had somehow used its long-collected power, largesse and influence to shape the contours of how police investigated the boat crash that killed Beach and other matters.

The charges against Paul Murdaugh were dropped after his death. But that didn’t end the family’s potential liability in the case. There is still an extant obstruction of justice investigation related to the boat crash–alleging after-the-fact efforts to cover up what actually happened on the night the young woman died. There’s also pending civil litigation.